Exploitation Trend: 70 Percent of all Creative Workers Are Asked to Work For Free This is not new to all of us. Here at Noupe, we've already published a couple of cartoons on the topic. Internationally, hashtags like #nospecwork represent the battle against the exploitation of creative work. A new study from the United Kingdom displays a level of this plague that I didn't know of. 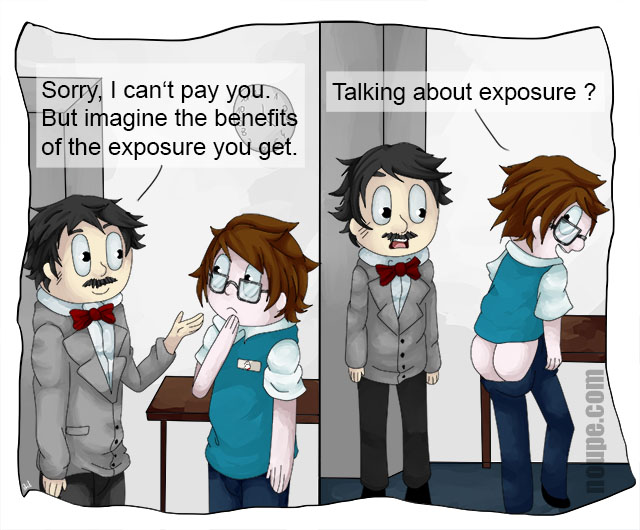 The operators of the rather new design collaboration tool Approve.io from Manchester commissioned a study that was supposed to figure out the numbers to the spec work problem. During November and December of 2016, more than 1,000 freelancers in creative jobs were polled. They were asked to state how often they get asked for free work, and how often they actually agree to this proposal.

The final results showed that, on average, 7 out of 10 creative workers have already been asked for free work, and one of these ten people has actually worked for free.

The summary already sounds very dramatic, but it gets even worse when looking at individual professions. About 9 of 10 photographers were already asked to work for free.

Which Job Categories are Asked For Free Work Especially Often?

The shown average consists of all occupation groups included in the survey, so it also contains some that are not on the list above. The attentive reader will have noticed that the average of the named groups can't be 70%. (Source: Approve.io) Going deeper into the details of the study, the image differentiates even further. Apparently, the potential "commissioners" are driven by two assumptions. According to those assumptions, it is okay to demand free work from women, and people that are younger than 25. While the share of women is significantly higher than the percentage of men, the share of people under 25 is twice as high. According to the study creators, the reason for the rapid progress of creative exploitation seems to be social media. They have created a meaningful infographic on this, showing how blatant sales billionaires try to reinterpret other people's work for their benefit. [caption id="attachment_80016" align="alignnone" width="800"]

(Quelle: Approve.io - Blogpost on the Graphic)[/caption] The offered "rewards" were the usual classics. A bottle of champagne if the story gets published. "Exposure" to the large brand's followers, and the vague promise to be considered for paid commissions, if you prove yourself for free.

As always, and often, Noupe recommends: Stay away from free, or heavily discounted work. Once a price has been broken, you won't get it fixed again.

Home » Exploitation Trend: 70 Percent of all Creative Workers Are Asked to Work For Free