236
SHARES
ShareTweetLinkedin
If you’re the sort of person that regularly attends networking events, then chances are that you’ll have seen your fair share of business cards. The problem with most business cards is that they’re nothing particularly special. It takes something really special to stand out from the crowd, so if you’re seeking inspiration for your next business card redesign, look no further than our list of fifteen unique and inspiring business card designs below. 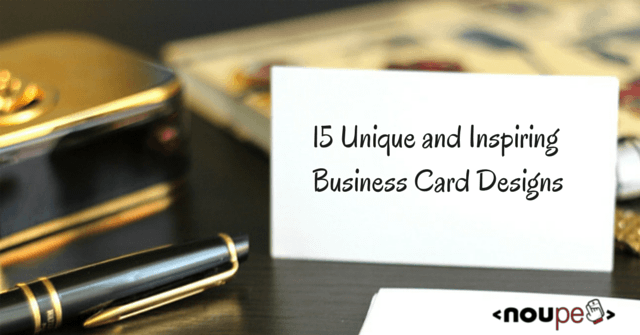 Keep in mind, that besides talented designers you'll also need high-quality printing from sites such as Fastprint. There are not a lot of these really capable services. So make sure to choose wisely. 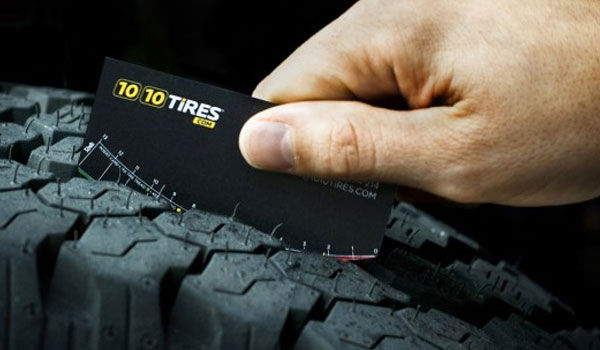 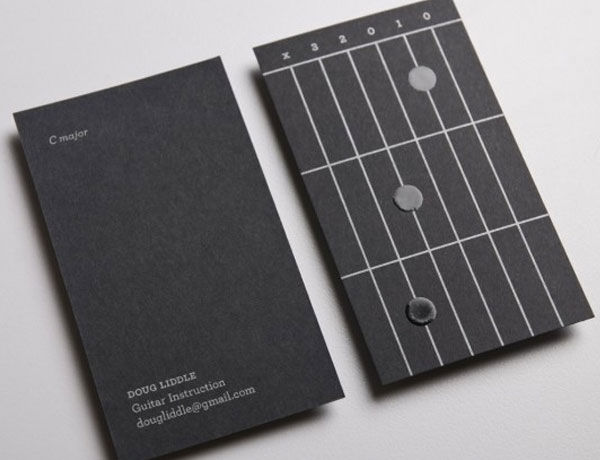 Doug Liddle might be one of many guitar instructors in Canada, but we seriously doubt that any other guitar tutors have a business card as epic as this one. The great thing about this card is that it introduces the recipient to the joy of learning to play the guitar within seconds of holding it. As you can see, the back of the card contains a chord diagram, allowing the recipient to start learning the guitar right away, and to get a taste of what might be to come should they choose to hire Doug. 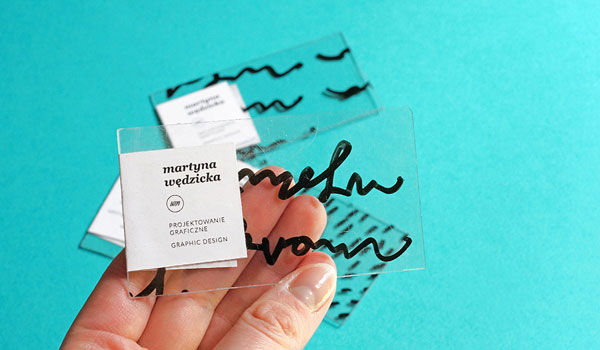 Martyna is a graphic designer based in Poland. She created these business cards as part of her personal branding project, with the aim of showcasing the personal attention she gives to her projects. The business cards themselves are almost entirely non-existent. This is because aside from a small patch (with her name on it), the business cards are entirely transparent. With each card, Martyna customises the design by hand using a marker pen. 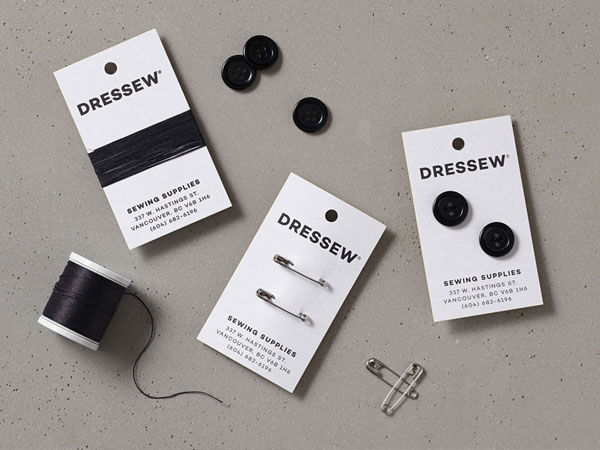 Dressew was founded over 50 years ago back in 1961 and since then, it has become the largest source of fabric and sewing materials in Vancouver. To promote the store, the organisation had these incredibly creative business cards produced, which, like the business cards mentioned above, serve a dual purpose. Each card has a unique sewing supply attached to it (e.g. buttons, pins, cotton, etc.). It’s a cool way to get the word out and give something back to your customers in the process. 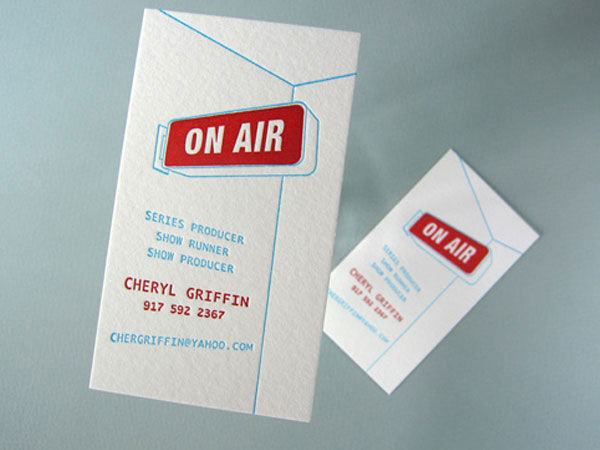 Cheryl Griffin created this business card when going freelance as a television producer. However, she wanted to create a card that didn’t contain an icon of the stereotypical film reel. Instead, she opted for a somewhat minimal design featuring a less widely used icon: the “on-air” indicator. The business card makes excellent use of the letterpress printing technique to create a 3D-like image. It’s simple, yet elegant and highly effective. 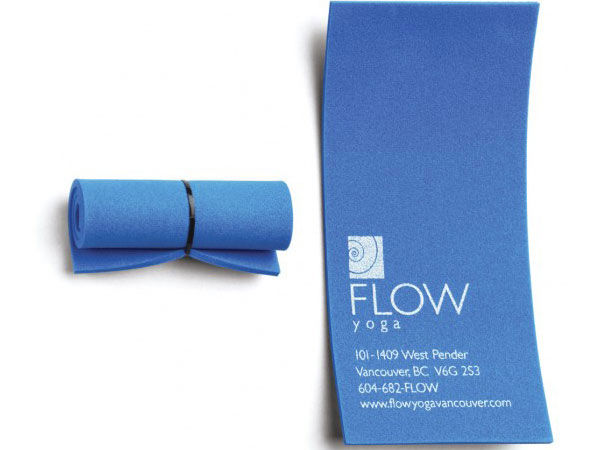 Flow Yoga is a yoga studio based in Vancouver, Canada. These days, there’s no shortage of yoga studios, so Flow Yoga opted to create this stunning business card to help stand out from the crowd. As you can see, the design is a simple yet highly creative solution. The business card actually depicts a yoga mat and just like a real mat, it rolls up too. The card contains all of the information you’d expect, but you can be sure that it will create a lasting impression for the studio. 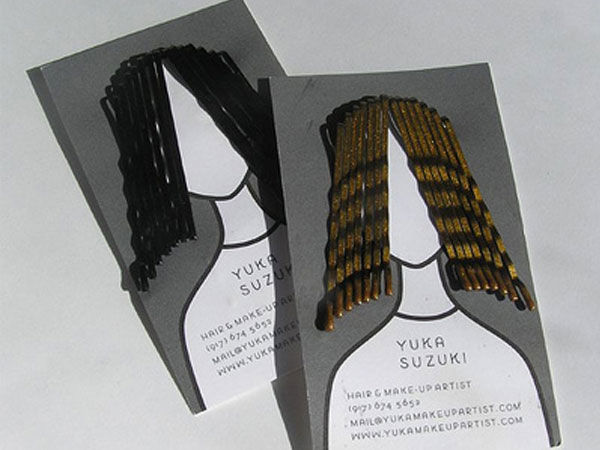 There’s no doubt about it, hair and make-up is a competitive industry. Yuka Suzuki realised this and created these epic business cards to ensure that she was remembered long after her customers leave the salon. The exceptionally smart design makes use of different coloured hair clips, which are strategically placed to create different coloured hairstyles for the girl pictured on the card itself. However, the coolest part is perhaps the fact that the recipient not only receives a business card, but also some free hair clips. 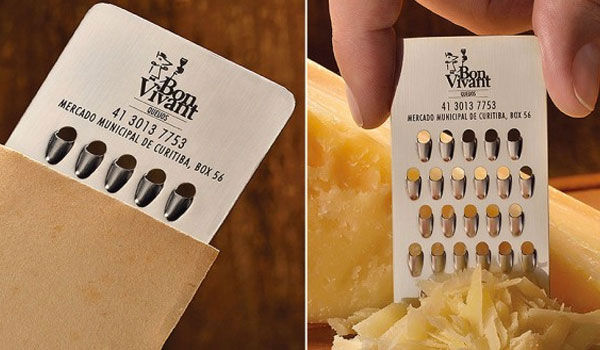 Bon Vivant is a cheese store that didn’t just decide to create a business card, but also to create something that their customers would actually use on a regular basis. So, the store hired JWT – a Brazilian ad agency – to create the business card pictured above. The card doubles as a cheese grater, and even comes in it’s own protective sleeve. Sure, these business cards might have been quite costly to produce, but you can’t put a price on that sort of marketing. 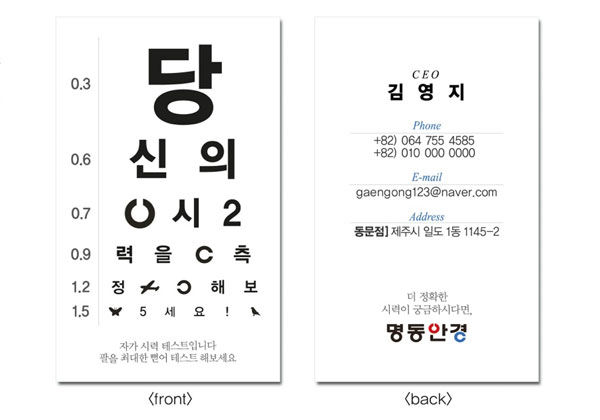 It’s rare that you see such a creative business card coming out of a small market store in South Korea, but clearly, this business card is about as creative as they get. Myung Dong has a target market of predominantly women between the ages of 50 and 70. According to Myung Dong, these women tend to be accustomed to their poor eyesight, and never think to let a professional check their vision. So, this business card was created which essentially allows them to do just that, and from the comfort of their own homes too. 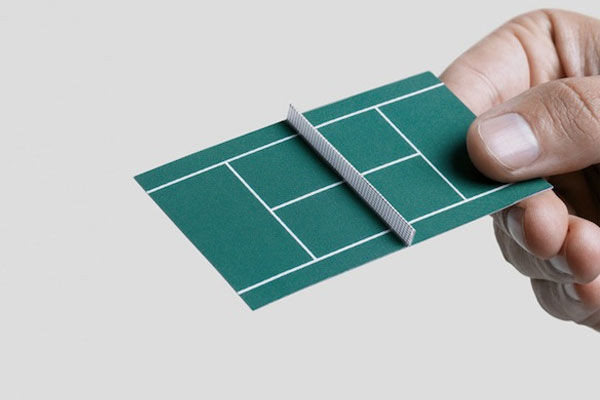 Denia Salu is a tennis academy in Saul Paulo, Brazil. Recently, they hired a trio of art directors, designers and copywriters to come up with a new business card design, with the aim of catching the attention of tennis players in the area. The result is the business card pictured above. Despite being a relatively normal business card at first glance, you’ll notice that when you fold the card in half, a miniature tennis court is created. They even went as far as creating two different cards: one featuring a clay court, and one featuring a hard court. 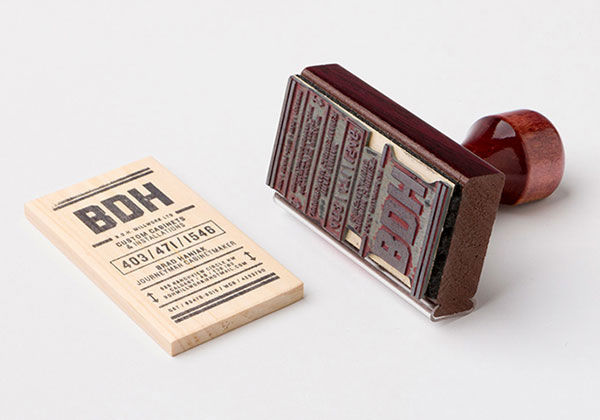 B.D.H. Millwork is a small company based in Calgary, specialising in the production of custom cabinets and installations. It’s an industry that is not typically known for such creativity when it comes to business cards, but as you can see, this business card is about as creative and “outside the box” as things can get. The business card isn’t printed on paper; instead, it’s printed on leftover wood found in the workshop. A stamp was created with all of the company details engraved, and wax is used to transfer the design to the business card/wood. The result not only looks stunning, but also is extremely cost-effective to produce, as it essentially makes use of leftover material. 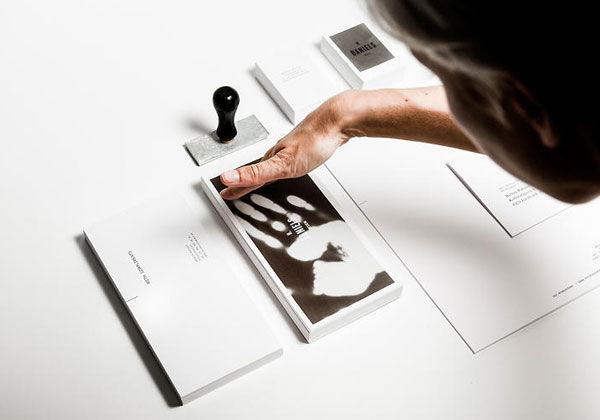 Natalie is a Viennese photo producer who commissioned these ridiculously creative business cards to be created as part of a larger stationary set. They were created by Bureau Rabensteiner – a corporate branding company – with the use of thermo-sensitive ink. Each business card is coated in a layer of the ink so that when the recipient touches it, a white image instantly developers on the area that’s been touched. If you kiss the card, you’ll see a pair of lips appear in white, for example. Essentially, the business card is likely a miniature Polaroid; the perfect talking point for a photographer. 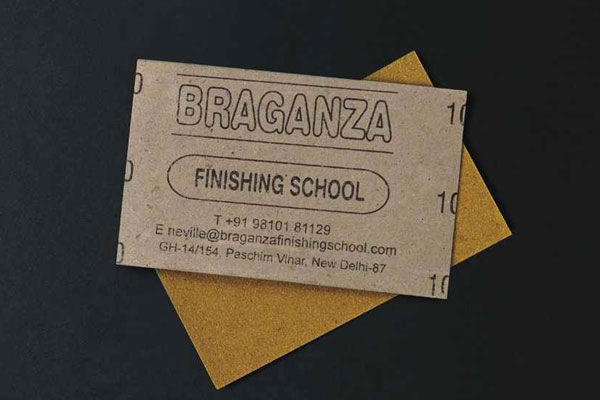 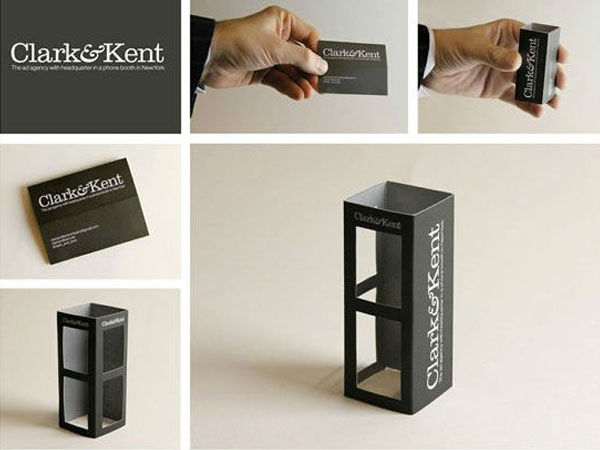 Clark&Kent is an ad agency that was created by three guys - Mr. Clark; Mr. And; and Mr. Kent – in New York City. However, unlike most of the ad agencies in New York City, they don’t have expensive offices. Instead, their office is listed as a phone box outside on the streets. Their website even features a photo of said phone box. Their business cards reflect the quirky nature of their brand, as the cards actually fold-up into a tiny phone box shape, complete with the Clark&Kent branding. The ad agency generated a huge amount of publicity with these cards, which plays on the Superman motif. 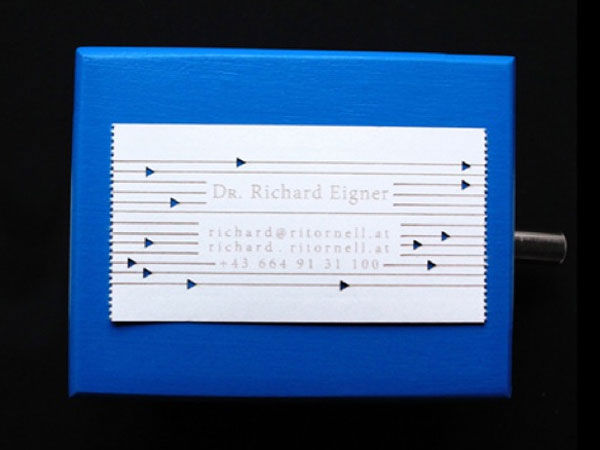 Ritornell might very well have the coolest business cards in existence. The business cards feature a unique set of holes, so that when they’re fed through a music box, a tune is played. Each musical tune is unique to the recipient, so each experience is unique. The cards were inspired by the improvised concerts that Ritornell regularly hosts, in which audience members are encouraged to join in by bringing along their own music boxes. About the Author: Joshua is a self-employed designer based in the UK. He see’s business cards on an almost daily basis and is on a personal mission to rid the world of poor design. (dpe)
236
SHARES
ShareTweetLinkedin