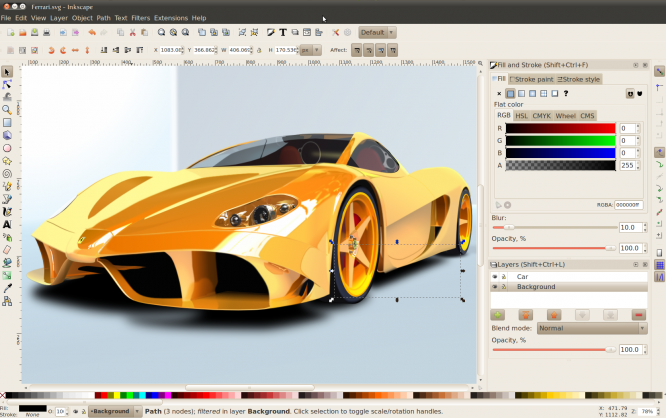 Is there a web developer, or ambitioned page owner that still doesn't know the free vector graphic project Inkscape? Inkscape is the vector counterpart to the free pixel editor Gimp and has been established for years now. In the past few days, the current version 0.92 with plenty of changes has been released after two years of development.

SVG and CSS: Inkscape is Moving Closer Towards the Standard

Inkscape is distributed under the GPL, making it an open source software to the core. It's not developed by a company but is kept alive by free contributions of many voluntary developers. For years now, the commitment has been on an oddly high level. Financed by donations, the project is able to send out a representative to the W3C SVG Working Group. This is the council that is supposed to further develop the standard Scalable Vector Graphics (SVG). This way, some new ideas out of Inkscape are considered for the expansion of SVG, which makes the project especially attractive for developers. As to be expected, the standard file format of Inkscape is SVG. Standards compliance is a particular priority of Inkscape. To meet the CSS standard, for example, the default resolution was raised from 90 to 96 dpi. The software provides different conversion options when trying to open an older Inkscape file. Overall, the developers have focused on correctly displaying many SVG2, and CSS3 elements within the program. However, the user interface doesn't allow you to alter all of these elements. Under Inkscape 0.92, the usage of complex mesh gradients doesn't require any tricks anymore but is provided by default.

Inkscape is Still Available for Windows, macOS, and Linux

Designers will be especially happy about the new path effects, which allow for very creative designs via interactive deformations. Watch the following video to get an overview of the new functions: https://www.youtube.com/watch?v=EI1hxXt9U4c As usual, Inscape 0.92 is available for the three dominant operating systems Windows, macOS, and Linux. Since we're talking about open source, you can also compile your own build, but you don't have to. The developers aimed for an easy distribution and brought you these installation packages. Under Linux, you'll usually get to the current Inkscape using your default package manager. If you want to gather detailed information on the current version's feature set, read the entire changelog. The official announcement can be found here.
39
SHARES
ShareTweetLinkedin