AngularJS vs. React.js vs. Ember.js – What are the Differences? 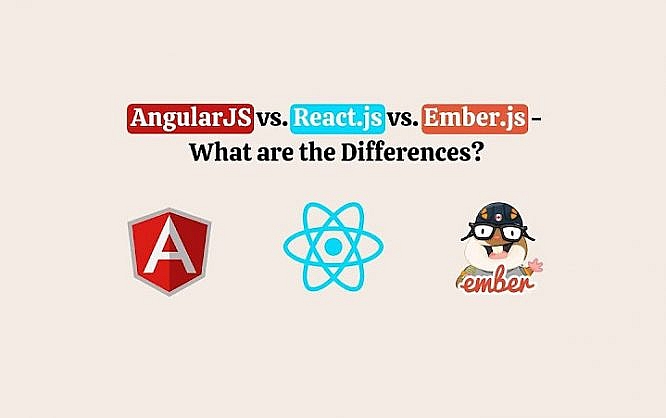 Let’s start with taking closer to What is AngularJS, React.js, and Ember.js.

AngularJS is an open-source, structural, and Java-based framework, which is mainly used for developing single-page applications. AngularJS enables developers to practice HTML as a template language. This makes it easier to propagate application components by extending the HTML syntax. Angular completely duplicates most of the code you need to write first. Angular JS is also used for developing scalable applications and deploying angular apps to AWS has many benefits.

React is a declarative, cost-effective, and manageable JavaScript library for developing user interfaces. This allows you to assemble complex user interfaces from small, isolated pieces of code called components. Interesting XML-type tags are immediately descriptive. You use components to tell React what to display on the screen.

Ember.js is a free, open-source JavaScript client framework for web application development. By providing a complete solution including data management and application flow, you can build client-side JavaScript applications.

A Key Difference Between React.js vs Ember.js

Here are some big differences. Ember.js forms the basis of the SproutCore framework. The main feature of Ember.js for understanding Ember.js and React.js is best for the framework. If you want to manage AngularJS and React.js, you will find that they are the best contenders by far. It consists of a server-side rendering architecture and a two-way link. On the other hand, React.js is an open-source JavaScript library that supports Instagram and Facebook user interfaces. Its powerful performance ranks among the best compared to other frameworks. The advantages of Ember.js development company include high performance and server-side rendering.

And also another advantage is that you can use the full documentation of Ember.js. Other benefits include bidirectional data links with automatic configuration. Plus, other benefits of React.js include an easy-to-learn interface and API. We can also provide more appropriate and faster updates. Ember.js development services are very efficient when rendering large data sets. Some of the other benefits that dominate the React.js library include ease of debugging. JSX can be used to display quotes and HTML subcomponents. You can also improve the import of components.

Comparison Between Angular vs Ember

There are many differences between Angular and Ember. Many types of audiences use the web. It is also used by people with motor or visual impairments. There are many differences in support between Angular and Ember technologies, making it easy for any team to interact with any web software application. In addition, designing more accessible applications improves the user experience on several levels. Angular developers using ARIA, tab index, and roles can take full advantage of accessibility. Today, AR headbands allow anyone to play more games while looking at the screen. Each Ember.js development company can add properties when starting the project.

When this site uses Ember.js development company and React, the sites I want to use are Linkedin, Apple Music, Playstation, Twitch.tv, Square. There are many modern and very scalable applications such as Linkedin and Twitch. tv. It may also require continuous real-time data and upgrades throughout its lifecycle.

Ember is already in use by many businesses that require full service. Many companies use it, including JetBlue, The Guardian, IBM, Netflix, Wikiwand, etc. Use Angular to build more dynamic single-page apps like Gmail.

It consists of a robust application architecture that can support multiple platforms. React is used by companies like Amazon and Google. Ember.js development services show that the best JavaScript frameworks currently popular with the developer community include React, Angular, and Ember. So what decision did you make if you wanted to choose the best of these best Ember.js development companies for JavaScript frameworks?

I am Vijay Chauhan working as a technical content writer with 4 Way Technologies. I am passionate about reading and writing content for Web application development, mobile application development, SMART TV app development, and DevOps. I am also fond of creating applications (small) using the latest Javascript library. I am having close to 5 years of experience in a blogger avatar. You can reach out to me to discuss emerging technology trends and its impact.

Home » AngularJS vs. React.js vs. Ember.js – What are the Differences?