This Node.js tutorial series will help you build a Node.js powered real-time chatroom web app fully deployed in the cloud. Throughout the series, you will learn how to setup Node.js on your Windows machine, how to develop a web frontend with express, how to deploy a node express apps to Azure, how to use socketio to add a real-time layer and how to deploy it all together. 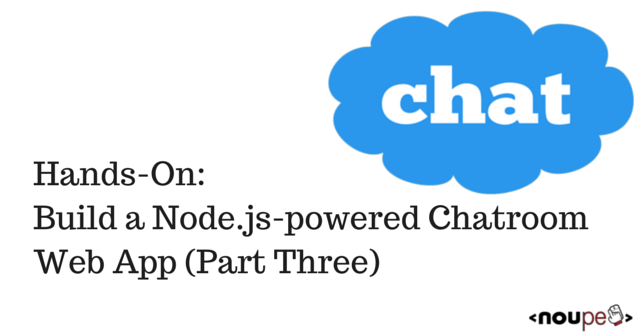 Part 3 – Building a Chatroom Backend with Node.js, Socket.IO and Mongo

Welcome to Part 2 of the hands-on Node.js tutorial series: Build a Node.js-powered chatroom web app.  In this installment, I will show you how to use your existing express-based Node.js app to create a chatroom backend with WebSocket support.

What are WebSockets? What is Socket.IO?

WebSocket is a protocol designed to allow web applications to create a full-duplex channel over TCP (i.e. to have bi-directional communication) between the web browser and a web server. It is fully compatible with HTTP and uses TCP port number 80. WebSocket has allowed web applications to become real-time and support advanced interactions between the client and the server. It is supported by several browsers including Internet Explorer, Google Chrome, Firefox, Safari and Opera.

Socket.IO is a JavaScript library and Node.js module that allows you to create real-time bidirectional event-based communication apps simply and quickly. It simplifies the process of using WebSockets significantly. We will be using Socket.IO v1.0 to make our chatroom app.

Package.json is a file that holds various metadata relevant to the project, including its dependencies. NPM can use this file to download modules required by the project. Take a look at this interactive explanation of package.json and what it can contain.
Let’s add Socket.IO to the project as a dependency. There are two ways to do that.

1. If you have been following the tutorial series and have a project in Visual Studio setup, right-click on the NPM part of the project and select “Install New NPM Packages…” 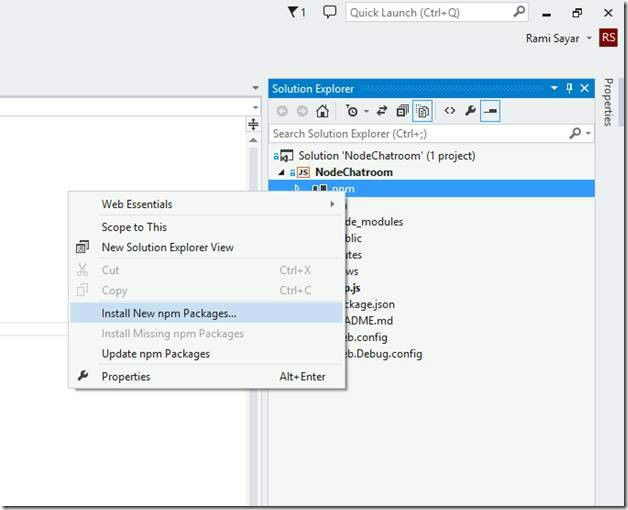 Once the window has opened, search for “socket.io”, select the top result and check the “Add to package.json” checkbox. Click the “Install Package” button. This will install Socket.IO into your project and add it to the package.json file. 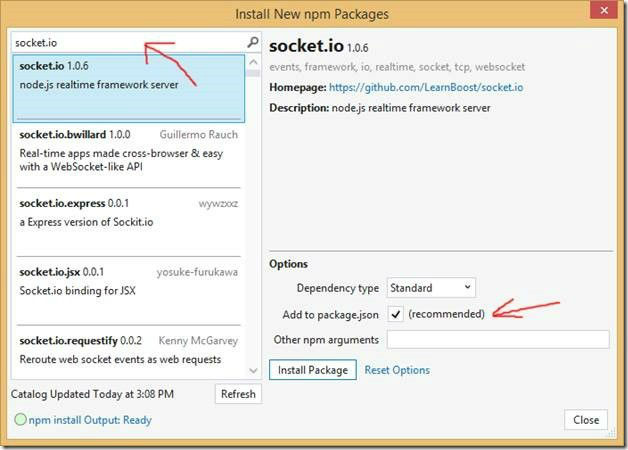 2. If you’re on OS X or Linux, you can achieve the same action as the above by running the following command in the root of your project folder.

The next step is to add Socket.IO to app.js. You can achieve this by replacing the following code.

To be replaced with:

This will capture the HTTP server in a variable called serve and pass that HTTP server so that the Socket.IO module can attach to it. The last code block takes the serve variable and executes the listen function which starts the HTTP server.

Logging a User Joining and Leaving

Ideally, we want to log a user joining the chatroom. The following code accomplishes that by hooking a callback function to be executed on every single “connection” event via WebSocket to our HTTP server. In the callback function, we call console.log to log that a user connected. We can add this code after we call serve.listen.

To do the same for when a user disconnects, we have to hook up the “disconnect” event for each socket. Add the following code inside after the console log of the previous code block.

Broadcasting a Message Received on the Chat Channel

Socket.IO gives us a function called emit to send events.
Any message received on the “chat” channel will be broadcast to all the other connections on this socket by calling emit with the broadcast flag in the callback.

Saving Messages to a NoSQL Database

The chatroom should save chat messages to a simple data store. Normally, there are two ways to save to a database in Node; you can use a database-specific driver or you can use an ORM. In this tutorial, I will show you how to save the messages to MongoDB. Of course, you can use any other database you like, including SQL databases like PostgreSQL or MySQL.

You should make sure you have a MongoDB to connect to. You can use a third-party service to host your MongoDB such as MongoHQ or MongoLab. Take a look at this tutorial to see how you can create a MongoDB using the MongoLab Add-On in Azure. You can stop reading when you get to the section “Create the App”, just make sure to save the MONGOLAB_URI somewhere you can access easily later.

Once you have created a MongoDB and you have the MONGOLAB_URI for the database – Under Connection info that you have copied to your clipboard – you will want to ensure that the URI is available to the application. It is not best practice to add sensitive information such as this URI into your code or into a configuration file in your source code management tool.

The next step is to add support for MongoDB to our project. You can do that by adding the following line to the dependencies object in package.json. Make sure to save your changes to the file.

Right-click on the NPM part of the project in the Solution Explorer to reveal the right-click context menu. Click “Install missing packages” from the content menu to install the MongoDB package so that it can be used as a module. 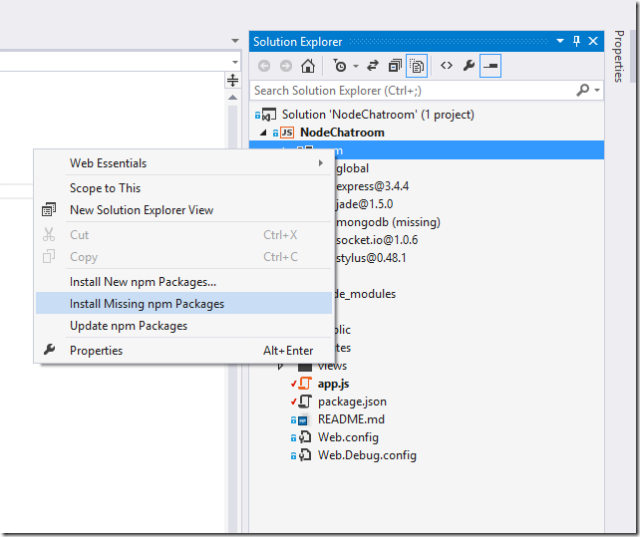 We want to import that module to be able to use the MongoDB client object in app.js. You can add the following lines of code after the first require(‘’) function calls, such as on line 11.

We want to connect to the database using the URI we have in the CUSTOMCONNSTR_MONGOLAB_URI environment variable. Once connected, we want to insert the chat message received in the socket connection.

As you can see in the above code, we use the process.env object to get the environment variable value. We go into a collection in the database and we call the insert function with the content in an object.

Every message is now being saved into our MongoDB database.

Off course, we don’t want our users to feel lost once joining the chatroom, so we should make sure to send the last 10 messages received to the server so at the very least we can give them some context. To do that, we need to connect mongo. In this case, I am refraining from wrapping all of the socket code with one connection to the database so that I can still have the server working even if it loses the database connection.

We will also want to sort and limit my query to the last 10 messages, we will use the MongoDB generated _id as it contains a timestamp (although in more scalable situations, you will want to create a dedicated timestamp in the chat message) and we will call the limit function to limit the results to only 10 messages.

We will stream the results from MongoDB so that I can emit them as soon as possible to the chatroom as they arrive.

The above code does the job as explained in the previous paragraphs.

You can redeploy to Azure by following the past tutorials (such as part 2).

In conclusion, we have a chat system capable of broadcasting a message received via WebSockets to all other connected clients. The system saves the message to the database and retrieves the last 10 messages to give context to every new user who joins the chatroom.

Stay Tuned for Part 4! Part 4 — Building a Chatroom UI with Bootstrap — will be posted to Noupe soon, and is also located on my blog here. You can stay up-to-date on this and other articles by following my twitter account: @ramisayar.

Part 1 -  Introduction to Node.js
Part 2  - Welcome to Express with Node.js and Azure
Part 3 - Building a Backend with Node, Mongo and Socket.IO
Part 4 – Building a Chatroom UI with Bootstrap
Part 5 - Connecting the Chatroom with WebSockets
Part 6 – The Finale and Debugging Remote Node Apps

More Learning for Node on Azure

For more in-depth learning on node, my course is available here on Microsoft Virtual Academy.

Or some shorter-format videos on similar node subjects:

This article is part of the web dev tech series from Microsoft. We’re excited to share Microsoft Edge (formerly Project Spartan) and its new rendering engine with you. Get free virtual machines or test remotely on your Mac, iOS, Android, or Windows device @ modern.IE.

Full Source Code of app.js for Your Convenience