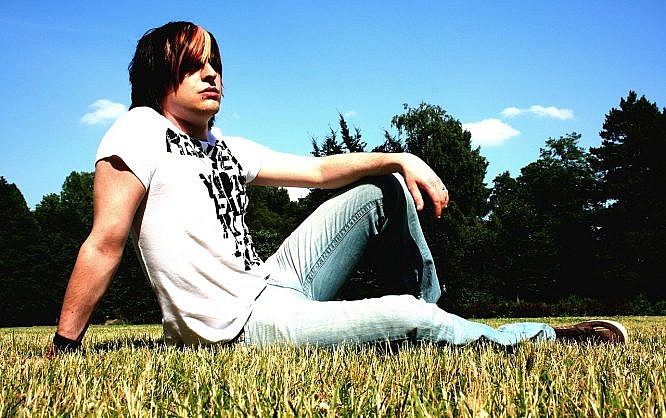 Awesome, great work! Aside from stereotypical self-adulations, Dribbble, one of the international design community's favorite services, does have something to offer. Even if you had already written off Dribbble, read the following article.

Dribbble, Temple of the Design-Enlightened

There's something to it. Dribbble is a place of self-adulation, a harbor for all the narcissistic designers out there. If you think that even that is an understatement, you may enjoy this article by the former MAD employee Speider Schneider. But be warned: Speider might hurt you. In fact, it does happen quite often that I end up asking myself why the respective creator thought he would have to make his "achievement" available to the community. Do you want an example? Here you go: 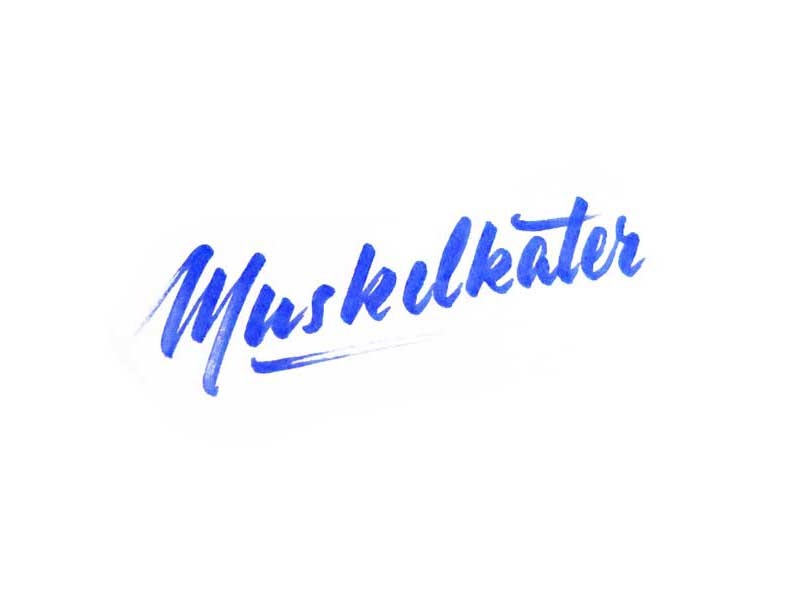 Even more noteworthy than the questionable design product are the comments on it, going "Smooth," "Awesome Work," and "Nice!". No idea what kind of reflex mismanagement to blame for that. The frontal cortex is full of wonders. In other cases, there's at least a "concept" up for discussion, and, due to the enormous size of the platform, there are always people "discussing." [caption id="attachment_104556" align="aligncenter" width="1024"] 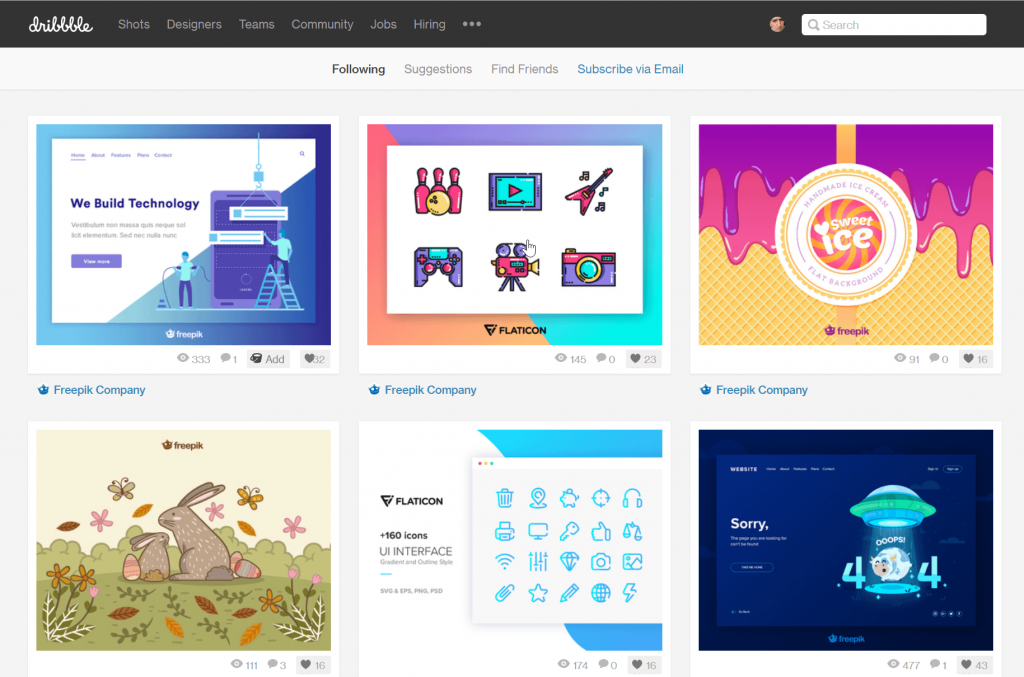 Dribbble's landing page looks different for everyone. (Screenshot: D. Petereit)[/caption] Dribbble defines itself as "Show and tell for designers." "Do whatever and talk about it" would be a valid title as well. In the more extended version, Dribbble describes itself as a platform where designers can show their work, or at least what they're trying to create at the time, in the form of screenshots. In theory, other community members are supposed to comment on the shown drafts. The creator is meant to benefit from what's supposed to be a true exchange. As we all know, a factual exchange is always good. With some good will, we could even (mis)understand Dribbble as a tool for design reviews. This theory doesn't survive the reality check, though. In the vast majority, the only interaction taking place is giving a "like" to a Shot (which is the name for the individual presentations on Dribbble). Most of the time, there are comments as well. I wouldn't sum this up as a "factual exchange," though. The only comments you'll find are supposed delightful chants, like "awesome," "lovely," or "great work." 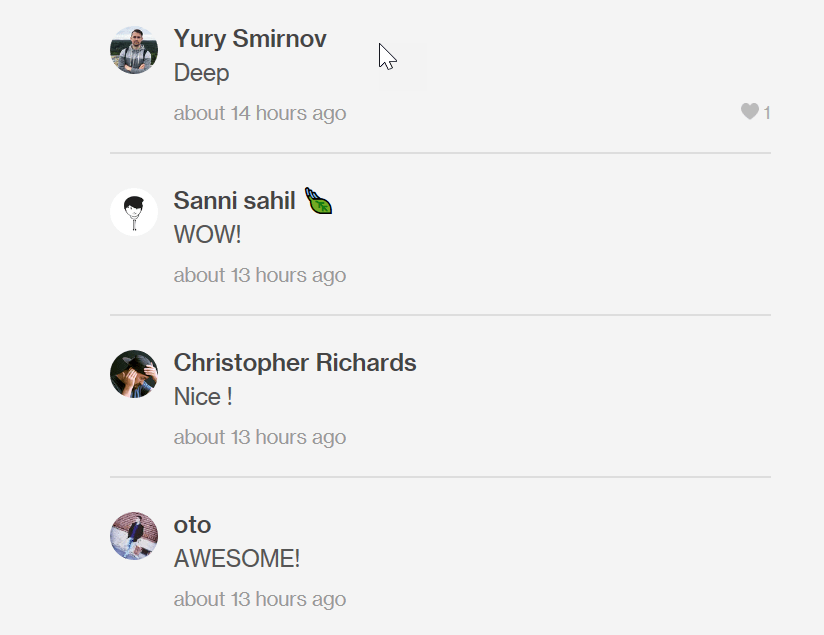 The recipients of these comments feel obliged to ecstasize other designers as well, and thus, they wander through Dribbble to leave their awesomes, lovelies, and great works somewhere else. Because of this, the service works like a real Perpetuum mobile where everyone convinces themselves of their top-notch content by assuring others that their content was top notch. To my knowledge, there are no studies on whether the excessive use of Dribbble leads to psychological disorders, like narcissism. However, it is imaginable. At the end of the day, one could conclude that Dribbble is a superfluous place for designers with too much time and too few customers. However, this would be way too short-sighted. In fact, there's legitimate use to be drawn from Dribbble. Let's see how that works. The keywords are curation and inspiration, as well as a mix of the two. Our crucial tool in the following process will be the Dribbble bucket lists, which you can think of as drawers that you sort different pieces of clothing into.

#1: Dribbble as a Source of Inspiration

The raw size of the Dribbble community alone guarantees that the platform is a representative profile of the branch. Shots are uploaded in quick succession, covering all areas of creative work in the digital space. Thus, for inspirational purposes only, it is worth checking out the "Recent Shots"now and then. Here, I recommend installing the Chrome expansion "Booom" in advance. The extension, which is also available for Safari, significantly boosts the handling of Dribbble. Using it, the display of the shots is larger, and they can be liked or moved into the bucket list from within the feed. Both actions could previously only be done in the detail view. GIFs automatically start on the list. Booom also improves the display on screens with higher resolution. This way, shots are displayed in better quality. When opening them, the @2x-version is used. "Booom" using an infinite scrolling is useful as well. This allows you to get into a literal scroll flow. Aside from the shot view "Recent," there are "Most Popular," "Most Viewed," and "Most Commented." It is possible to filter within these lists. For us, the interesting filters are "Animated GIFs," and "Shots with Attachments." More on that later. The search bar at the top lets you find shots you may be interested in via free text search. If you want to be inspired regarding icons, enter the said term, and see what Dribbble has to offer. [caption id="attachment_104557" align="aligncenter" width="1024"]

Dribbble: the result of the free text search for icons. (Screenshot: D. Petereit)[/caption] At the latest, this is where our bucket lists come into play. For instance, you could set up bucket lists on the different topics you're interested in. In a bucket list called "Website Inspiration," you'll collect appealing web design drafts from now on. Use another one called "Icon Inspiration" to collect parts of the search result mentioned above. Set up as many sensible bucket lists as you can manage. Adding shots to the list can be done from within the overview if you have installed "Booom." If not, you have to enter the detail view of the respective shot first. This is done with a click on the preview in the overview. [caption id="attachment_104552" align="aligncenter" width="1024"] 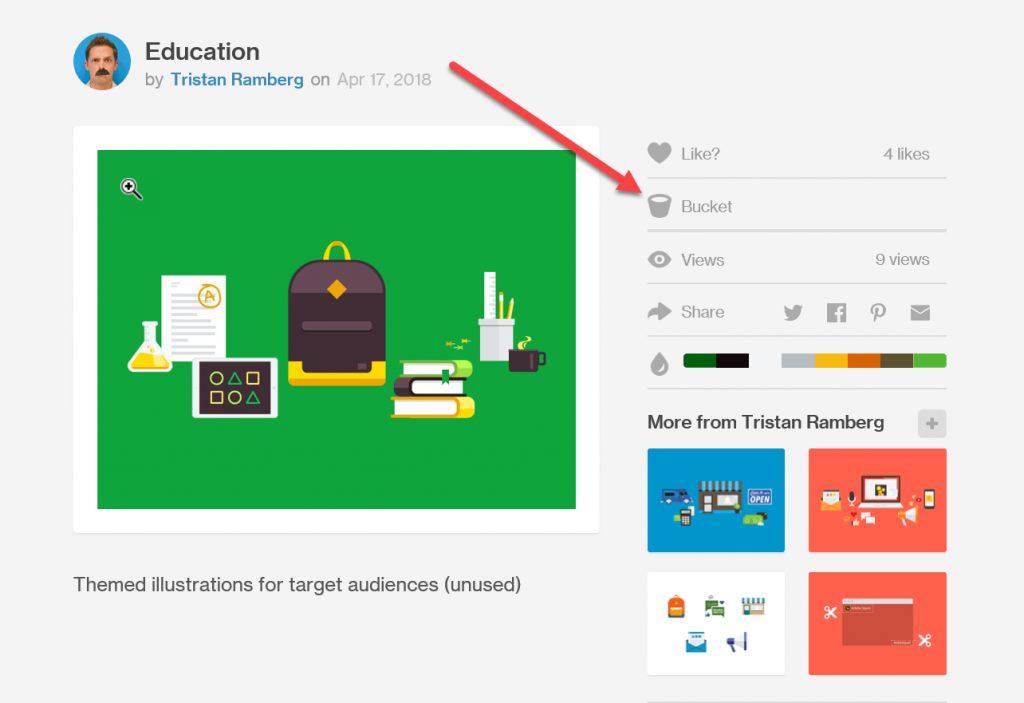 Dribbble: adding an element to a bucket list. (Screenshot: D. Petereit)[/caption] Bucket lists can be created comfortably, by clicking the bucket icon. This opens an overlay that lets you choose whether you want to add the selected element to an existing list, or if you want to create a new one. [caption id="attachment_104553" align="aligncenter" width="1024"] 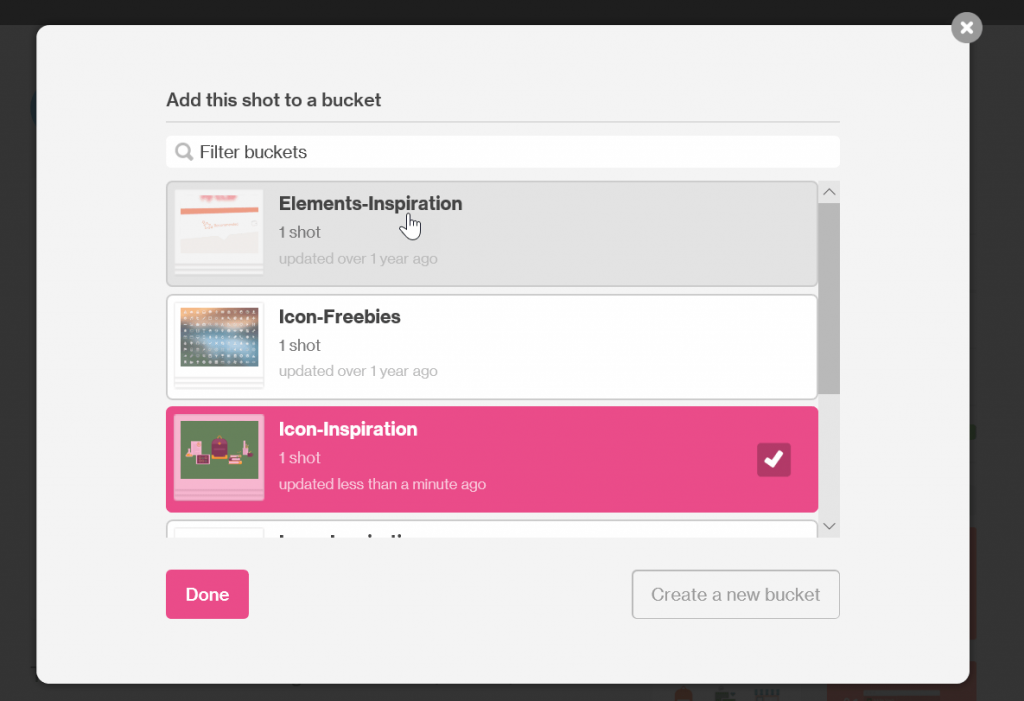 Intuitive management of your bucket lists. (Screenshot: D. Petereit)[/caption] In case you have a lot of lists, filter the stock by entering an appropriate keyword, or a combination of multiple search terms. Keep in mind that the results get increasingly narrow the more specific the keyword combinations get. A somewhat generic search is recommended for when you cast your net for the first time. Up to this point, this is pretty good and useful. However, Dribbble becomes even more helpful when you tap the creative energy of other curators. Next to the bucket icon, you can see how many buckets the displayed shot is in already. A click on the info opens a list of according lists, which is where you find the real gems. [caption id="attachment_104555" align="aligncenter" width="1024"] 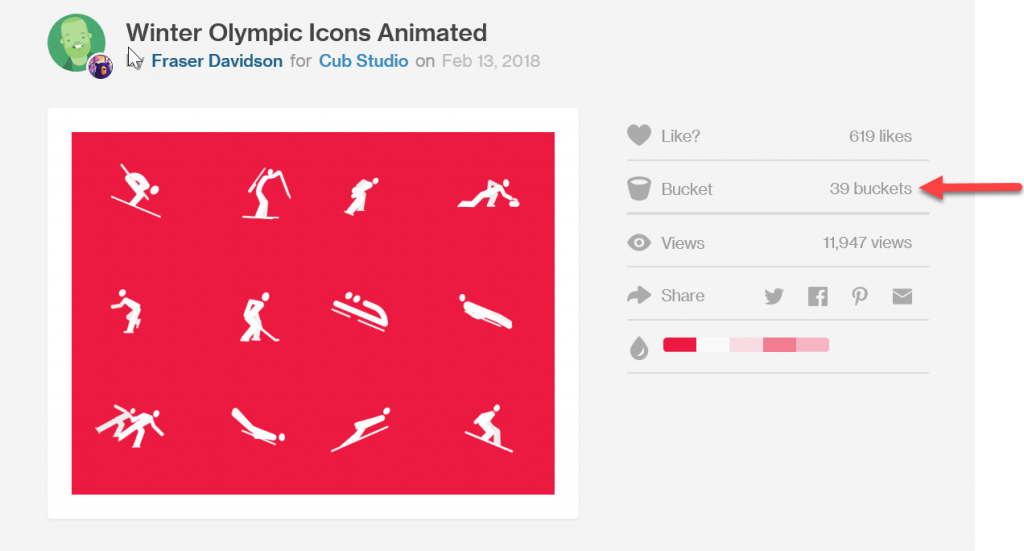 Here, you can see how many buckets the selected shot is in already. (Screenshot: D. Petereit)[/caption] The number of people putting tons of effort into this kind of curation is not insignificant. This is a way to get hand-picked shots that mostly deal with the same topic you looked for in the search function. Go through the promising bucket lists, and add the most exciting shots to your lists, or follow the creators of the list. The display of the bucket list is sorted chronologically, by the way. The buckets with the newest entries are at the top. The further down you get, the more static the lists become, as they haven't been updated in a while. Lists that are older than three months without new additions can be considered abandoned, and the shots within are outdated. If you're already active on Twitter, connecting Dribbble to Twitter is recommendable, as Dribbble automatically suggests people that you follow on Twitter that have an own Dribbble profile. Over time, the described methods get you a whole bunch of lists with inspiration on the different topics with relevancy to you. Small sidenote: if you have found a complex icon or another design element that sparked your interest, why don't you use the shot as a background layer in the design tool of your choice, like Sketch, and use it as a draft? Of course, this is not me suggesting plagiarism. You should always add your personal touch, but this should make things much more relaxed.

#2: Dribbble as a Collection of Resources

Aside from its function as a source of inspiration, a bit of effort can turn Dribbble into a source for helpful design resources. Here, the above-mentioned filter called "Shots with attachments" comes into play. Applying this filter means that only shots with a file attachment are displayed. This is not always, but rather often, a sign of free content. Using the freebie tag is more reliable. Here, you only get to see shots that have been assigned with the tag "Freebie" by their creators. Thus, you can be sure that these are free-to-use elements. Though, you still have to check the respective usage conditions of each specific shot. [caption id="attachment_104558" align="aligncenter" width="1024"] 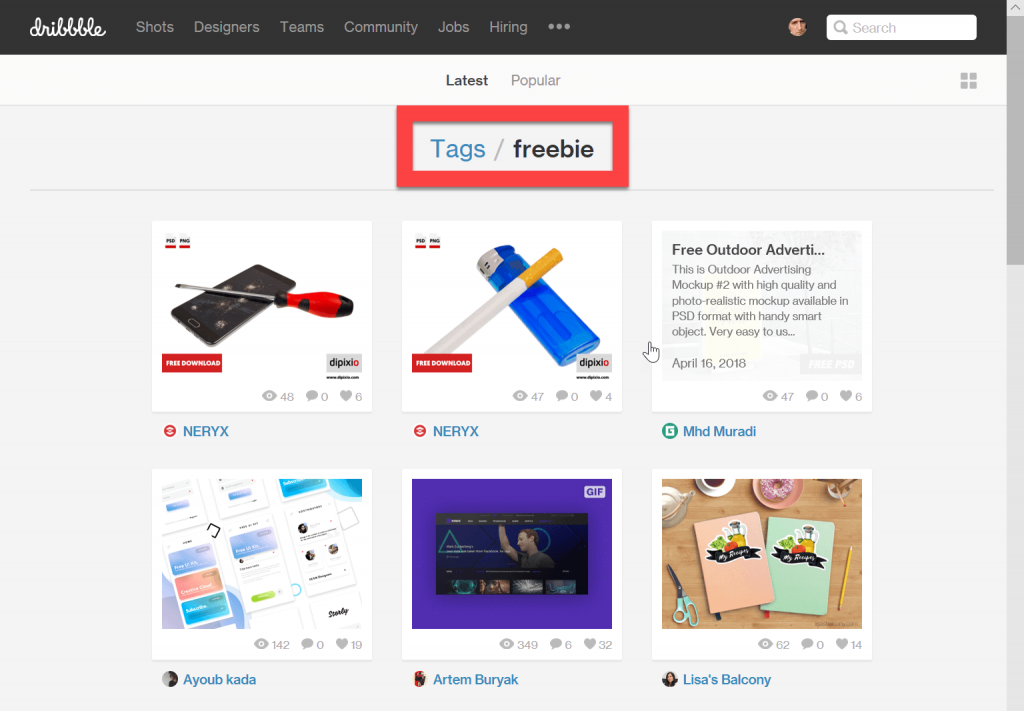 The freebie tag only shows you free resources. (Screenshot: D. Petereit)[/caption] Within the shots from the freebie tag, the order is chronological. The most recent contributions are at the very top, the older ones are further down. Via click, you can change this order to "Popular," to see them sorted by popularity, although the calculation does not seem fully transparent. If you don't want to load the shots right onto your hard drive, which should be the case in a collector session, you can fall back to the concept of bucket lists. You could collect free icons sets in a list called "Icon Freebies," and PSD templates for websites in a list called "Template Freebies." Usually, the shot is downloaded via the external websites of the respective shot creators. Thus, approach the download with the needed caution, and pay attention to the usage conditions. If you want to make things even more comfortable for you, visit the platforms that have made it their task to curate the best Dribbble freebie shots. This way, you don't have to search yourself. Unfortunately, all the external services are only taken care of sporadically, so they're not very up to date. This goes for Fribbble, as well as Freebbble, and DB Freebies. Since the services have already reached a total capacity of way over 1.000 free resources, searching on there is worth it nonetheless. [caption id="attachment_104551" align="aligncenter" width="1024"] 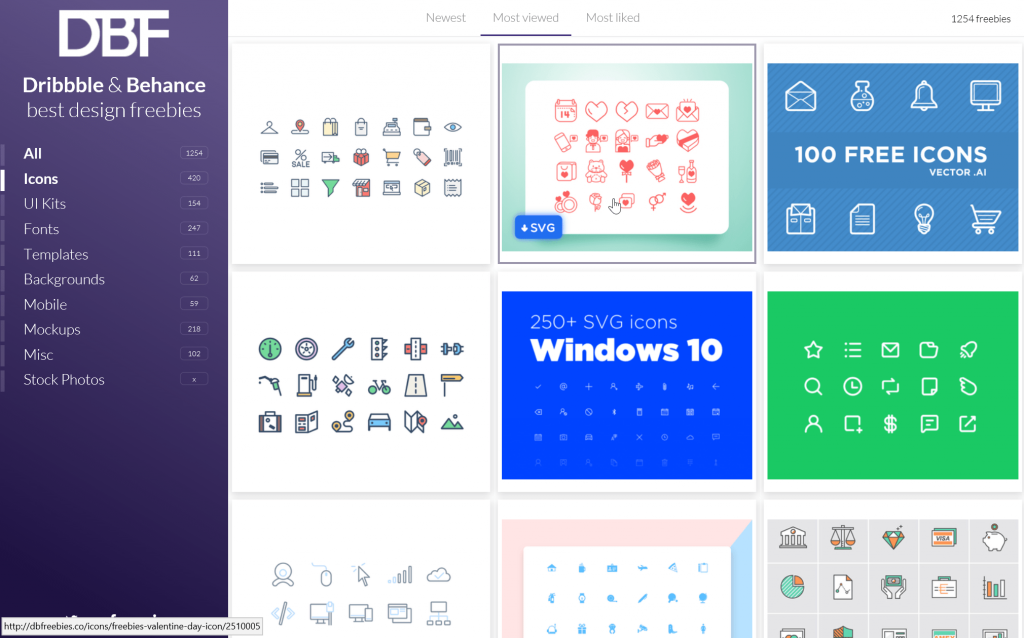 DB Freebies alone already has over 1.250 free resources to offer. (Screenshot: D. Petereit)[/caption] So, now you have a whole bunch of ways to get something useful out of Dribbble, without wasting your time writing stereotypical comments. How do you personally feel about using Dribbble? Are you one of its active users, and if so, what kind of activities does that include? What's the reason for your fascination with the service?
26
SHARES
ShareTweetLinkedin