Back from the Shoe Box: Audio Cassette Revival Art Work by Benoit Jammes

Children of the Seventies and the Eighties are likely to be particularly interested in what we want to show you today. French artist Benoit Jammes found a bunch of audio cassettes in his basement, yet did no longer own the appropriate player hardware. So he went ahead and sculptured the former sound sources to something more visual. We had a little talk with Benoit... 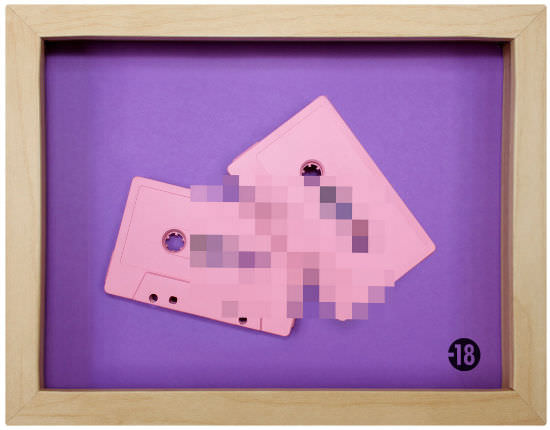 Hi Benoit. Tell our readers a little bit about yourself, please.

I'm a 33 years old graphic designer and live in Paris, France. I don't come from art-schools, but I do love every kind of creative work since I can remember. So I became a 'free-time' artist, between my job and my family...

You've recently published a series of photos showing off your hand-crafted cassette-designs. How did you get this idea?

I found an old bunch of cassette tapes at home. As I no longer own the equipment it takes to be able to listen to them, I decided to give them a new life. It once was audio, now it became visual ! I assume, these cassettes are more happy now than in a shoe-box :)

Is this plain digital work or did you actually use real-world tools to build these works of art?

Everything you see is real pieces from real cassette tapes. I cut, sculpt and paint by hand. Some shows to exhibit them are coming, so I invite you to come for discovering the series.

Motifs vary, but we seem to be able to spot a focus on life and death in your cassette-works. Is there a message behind it?

It's the first time someone tells me that, but it's interesting indeed. It's a 'dead object' by the fact that production is over since years now, so that cassette tapes became collector's objects only, yet above all a very nostalgic affair. So as I said, resuscitating them sounded like a good idea. I hope that people are happy to see that they managed to have a second life :)

Did you do things like this before? If yes, where can we see them?

I had my hands in a lot of other creative projects but this one is the first public and complete one. Ongoing other stuff will come. I am pretty excited to show that soon as possible! If you want to stay on top of things you can follow me on Facebook.

Thanks, Benoit, for taking the time. We will definitely keep in touch to see what you are about to build next!

I will keep you updated. Thanks for your interest!