Tables in WordPress posts are doable with any modern theme. However, these solutions are nothing more than pure visuals. A specialist such as wpDataTables allows you to create and manage tables and their data like no other.

Of course, you can go ahead and integrate a table into your post with some good old HTML. This is not difficult, and you can design it however you want to via CSS. For simple applications, such as a structured imprint or a price table with a dozen entries, this is entirely sufficient. However, if you need tables to use them as data containers since you want to display a tool overview or a complex feature grid, you need something else. After all, you'd want the overview to automatically refresh when new content is available in the database or data file, let's just call it data source. Of course, the viewer is supposed to be able to sort the table to his own prerequisites, and, depending on the defined conditions, data cell highlighting can be very helpful. Now if only there were filter functions for larger data tables what more could you ask for? [caption id="attachment_103962" align="aligncenter" width="1024"]

Cell highlighting according to defined conditions, aka conditional formatting (Screenshot: Noupe)[/caption] Well, the tables should be responsive. And if we could even use them for user-sided data input, we'd have a significant additional use. To make that possible, the tool would have to be capable of frontend editing, which would be a fantastic feature in general. Occasionally, we also want to display our data as charts, as they make it easier and more appealing to visualize market shares or other competitive data. Of course, we also don't want to have to code manually to reach our goal. Now our wishlist should be long enough.

wpDataTables Fulfills All of Our Wishes

wpDataTables is the premium WordPress table plugin that fulfills all of the wishes as mentioned above. It is developed by the Belgradian software forge TMS and its 12 team members. wpDataTables is not the only occupation of TMS. They also create software solutions for sensitive branches, including the uprising FinTech industry, as well as scientific institutions. Their clientele is international. I don't say this to praise TMS to the skies. This is merely meant as a qualification proof. wpDataTables is a professional solution by a professional team. The wishlist written earlier is part of the plugin's actual feature list. However, the functionality is far more complex than our small wishlist makes it seem. Not even the implementation of a table is a conclusively defined feature. How does wpDataTables interpret this? [caption id="attachment_103964" align="aligncenter" width="1024"] 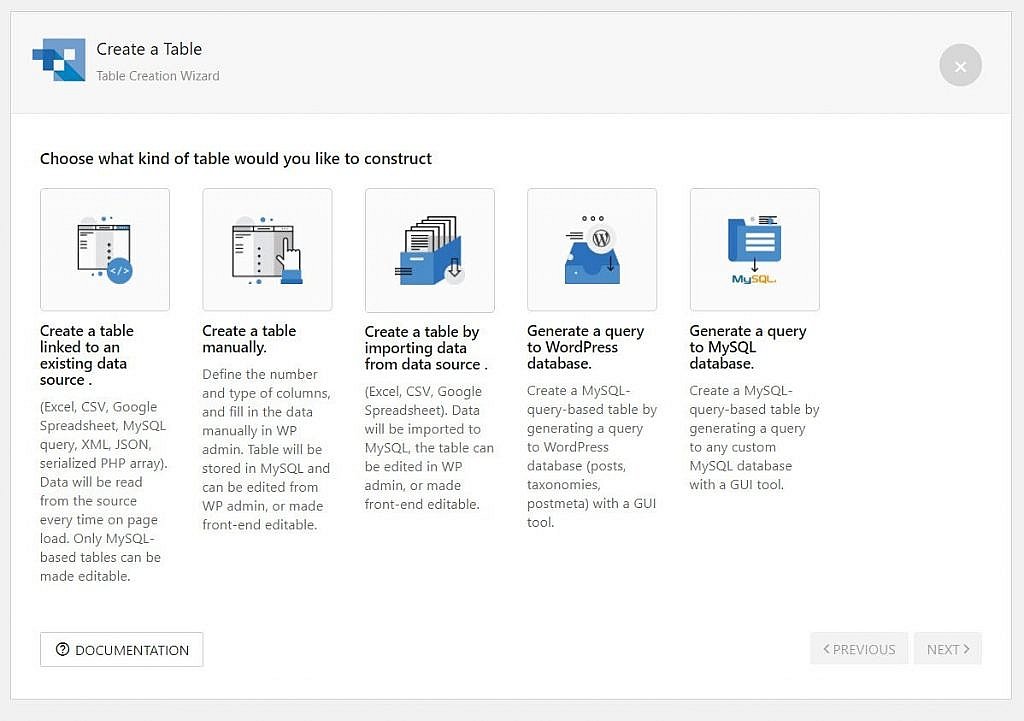 The wpDataTables assistant helps you create a new table. (Screenshot: Noupe)[/caption] For one, we could manually create and implement a table. Here, we first create the table and its data columns, then manually fill them with the respective data content. To do so, wpDataTables provides us with multiple ways of editing the data. The default editor enables dialog-controlled input. Here, we enter the content in a form-based way. This classic mode of data gathering is meant for users that only need to fill a few data fields with content, and value a certain level of procedure-sided control to avoid erroneous input. The Excel-like editor, on the other hand, shows the data in the form of a table and lets us manipulate data content right within the individual table cells. This type of data collection is suitable for users that have to manually collect large amounts of data, quickly want to correct the content of a single cell or want to add data from an existing table via copy and paste. [caption id="attachment_103965" align="aligncenter" width="849"] 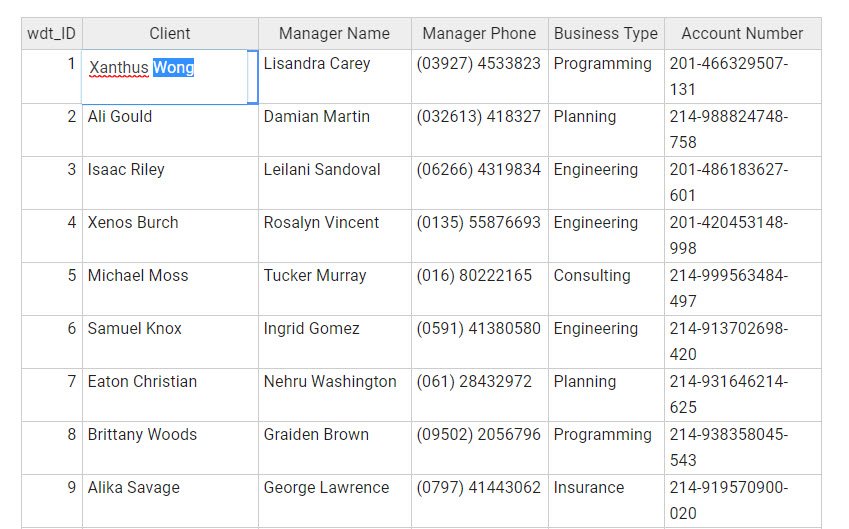 The Excel-like editor grants you access to the data in a way that's similar to an Excel sheet. (Screenshot: Noupe)[/caption] However, we don't have to go that route as soon as we have the data available in a table as it is, and have that one as an Excel, SVG, Google Sheet, MySQL Query, XML, JSON, or as a PHP array. In that case, things will be easier for us, and we only need to choose from two alternatives. We either link the data source, which grants that the data table is synchronized with the external source whenever the table is accessed. Or - if our source is Excel, CSV or a Google sheet - we import the source into our MySQL database once. After that, all the data can be edited, while the sync solution only allows for that with MySQL queries. The third primary option for the creation of a table in wpDataTables is directly placing a MySQL query onto the WordPress database or even any external database, and then tabularizing the response. You don't need to know SQL for this either. The queries are created with a visual helper. Pretty much anyone can do this. Changes made to the connected data are saved in the original database, allowing you to actually use your WordPress as a database manager. The hard work is left to the respective SQL server. wpDataTables gets the results or sends back the changes via Ajax. Once a table or chart was set up, implement it wherever you want to with a simple click on one of the icons in the Tiny MCE, the default text editor of your WordPress. Of course, you can also manually integrate tables and charts using the predefined shortcodes. [caption id="attachment_103967" align="aligncenter" width="811"]

Integration Into Tiny MCE. (Screenshot: Noupe)[/caption] By the way, the developers promise that the plugin won't even struggle with millions of data rows, and will still perform well. All tables are fully responsive on mobile devices. It doesn't matter which theme you use, as long as the theme itself is also responsive.

Getting wpDataTables Started is Just as Easy

As wpDataTables is a plugin for WordPress, the installation shouldn't be a problem. After the purchase, the plugin is available as a Zip archive. Install it in your WordPress backend under Install > Plugins > Upload Plugin. After the following activation wpDataTables gets its own menu item and can be accessed from the left-side backend navigation menu. wpDataTables works out-of-the-box and generally does not require any further configuration. Nonetheless, the plugin is highly customizable, as you can tell from the following screenshot: 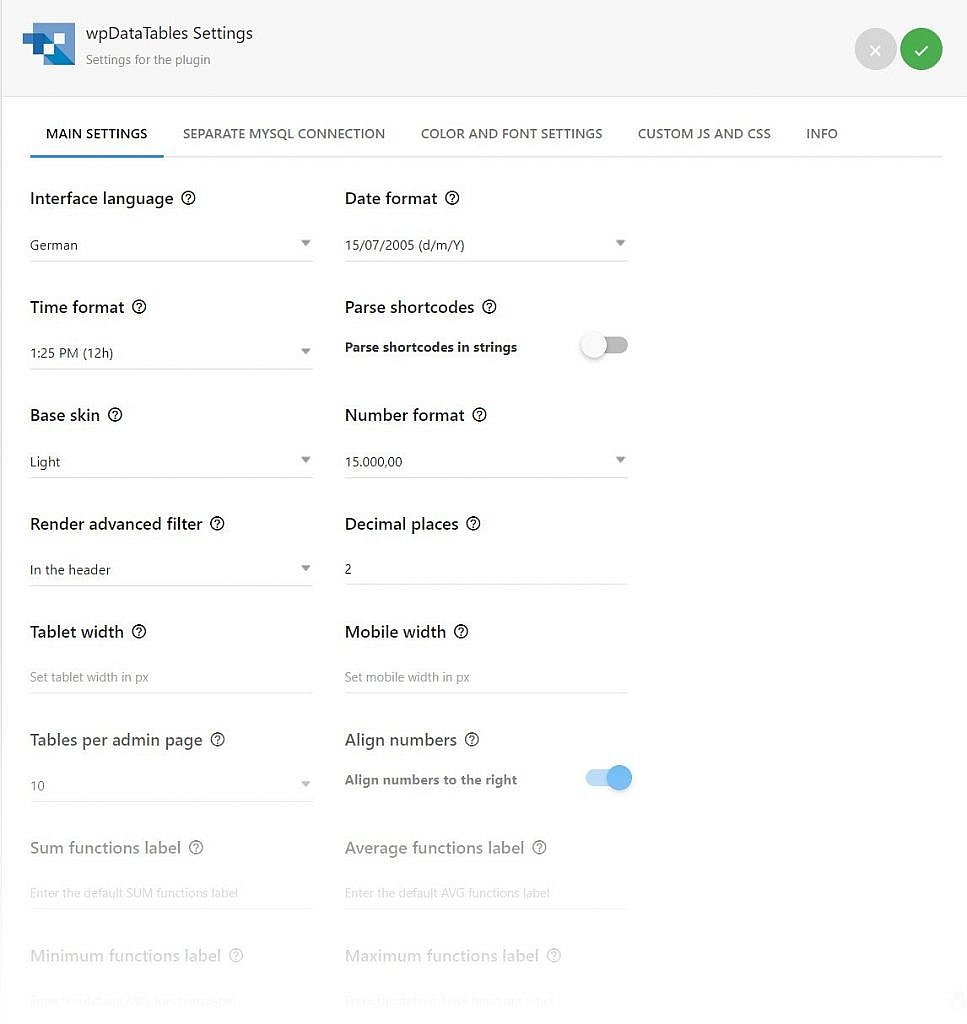 The menu items assume that you either want to view existing tables or create new ones. Or that you want to access an existing visualization chart or create a new one. Thus, handling the feature set should not be too complicated. You can create new elements from within the overview of tables and charts also. All roads lead to Rome. [caption id="attachment_103963" align="aligncenter" width="1024"] 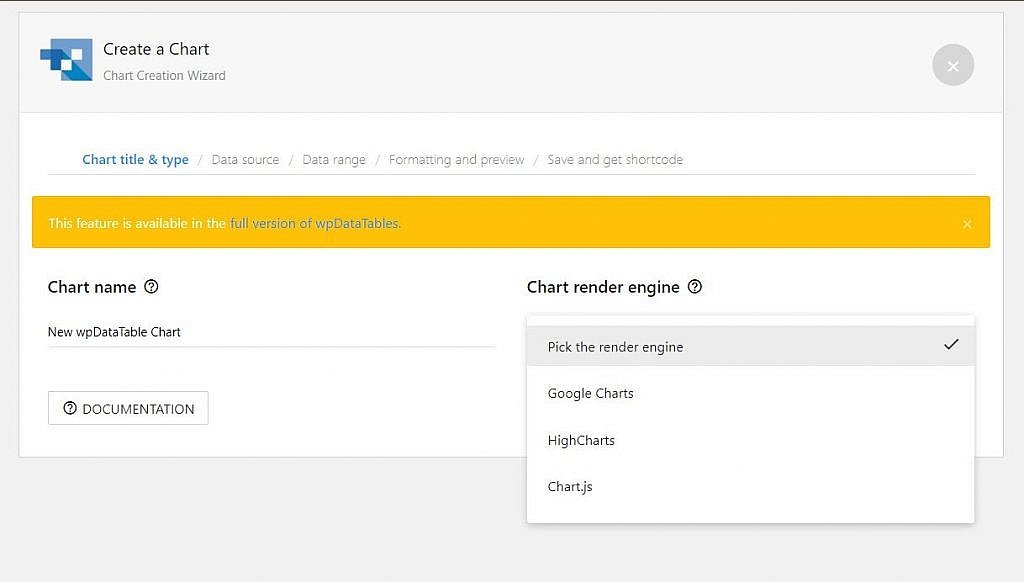 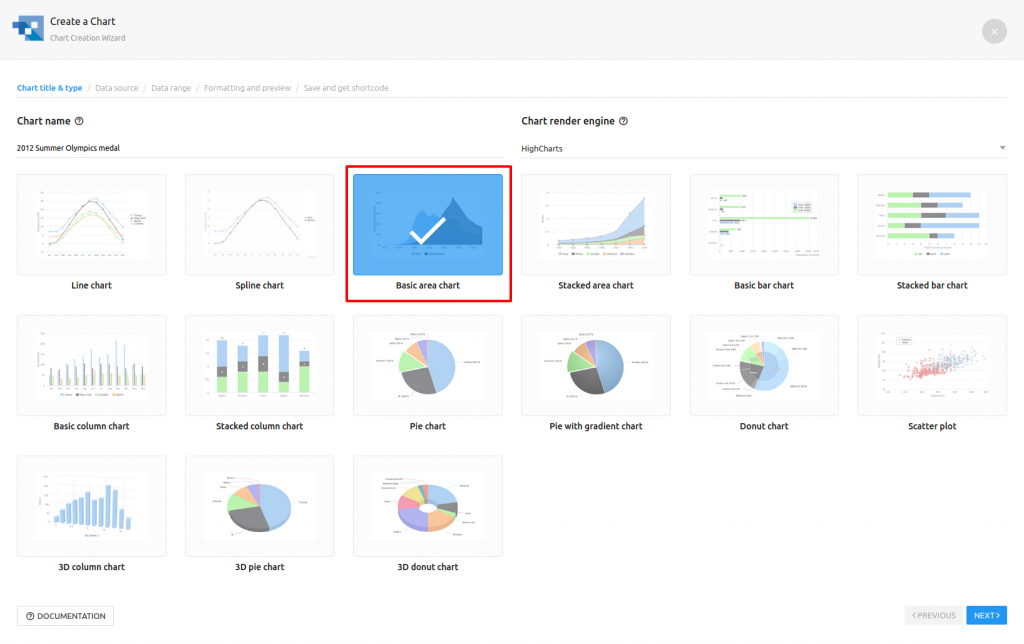 Different display options in the chart module. (Screenshot: TMS)[/caption] Various add-ons are offered to serve more specific purposes that don't come up in every scenario. Each of these add-ons is a paid offer. When using wpDataTables for the display of large amounts of data, you may be interested in the add-on Powerful Filters. It allows you to apply cascading filters to your data tables, aka filters that work sequentially, based on one another, to narrow down the displayed data more and more. With a Tinder data set, for instance, you could first filter out all women, then all blondes, then all of those that are at least five feet tall - you get the idea. Powerful Filters costs a separate 33 USD. As of right now, there are four add-ons, with more to be announced in the future. [caption id="attachment_103961" align="aligncenter" width="1024"]

These four add-ons further increase the functionality of wpDataTables. (Screenshot: Noupe)[/caption] wpDataTables is supported by excellent documentation and supplemented by many video tutorials. However, it should be said that wpDataTables is very easy to learn, even without the extensive documentation. With a price point of 44 USD (plus VAT where applicable), the plugin is not an investment one would think about for months. Yesterday's order at Pizza Joe's was more expensive than that. The price is not only low when compared to pizza, though, but also when looking at what you get in return.

wpDataTables is a premium plugin for WordPress, sitting at a price point of 44 USD on the Envato Market, which is a steal for the given feature scope. With over 14,000 sales and average ratings of 4.65 to 5 stars, there are a lot of satisfied users. By the way, the price is a retail price, not some subscription. One purchase gets you free access to all future versions. wpDataTables makes for the smooth rendering of extensive tables and charts. Millions of data rows are no problem for the plugin. None of the functions require coding skills, and all features can be used through a graphical user interface. The plugin is also compatible with a whole bunch of input sources, including Excel, CSV, JSON, Google Sheets, MySQL, and others. wpDataTables is the tool of choice for everyone that runs a WordPress site on which data is presented in the form of a table or a chart. It is also possible to let the user interact with the data. Optional add-ons allow you to expand the plugin's feature set if need be. If you want to take a look for yourself, which I strongly advise you to do, you have two options. For one, there's an online sandbox as a demo with all features available. Or you install and use a reduced version of the plugin from the plugin repository. Features not available in the Lite version are still visible but labeled as only accessible in the full version. Either way, chances are high that wpDataTables will quickly win you over.
24
SHARES
ShareTweetLinkedin