Humble Freelancer, Assertive Businessperson – A How To

27
SHARES
ShareTweetLinkedin
If you're a freelance designer, or you work for another company, you got there not because you love business, but because you're a designer at heart. The business side of things came as a necessary evil, but you really love nothing more than to doodle all day, mess around in photoshop, or bang out semantic code. There are a lot of traits of being a good designer which are counter-intuitive to being a good business person. But if you learn to embrace both sides of the coin, your business will prosper, and you'll get to do more design. It's great to create beautiful works of art for Art's sake, but the reality is, you can only afford do so if you're getting paid. Yes, being a great designer means you need to be humble, accept criticism, have an open mind, listen to other points of view, be idealistic and possess all sorts of wonderful character traits of the enlightened and creative individual. But to afford to do so, you need learn how to run your business.

Like many freelancers find out the hard way, there will come a day or a client that will act as a tremendous lesson and taught you to be assertive. Now remember, assertive doesn't mean yelling and stamping your feet; it just means sticking up for yourself and not letting yourself get bulldozed. Being assertive sooner in the process will help you avoid being angry later! An unfortunate truth we find, is that some clients will take advantage of you if you give them the opening. Make sure you don't let them!

Don't Set a Price Until Everything is Scoped Out

That means, not just features and functionality, but timeline, urgency, number of revisions, how many other people will be involved - the whole works. Everyone's expectations, both yours and the clients needs to be on the table, and part of the discussion. Without knowing these vital specifics about the project, we are sure to misquote the job and probably end up costing ourselves before we can call the project closed.

Don't Be Afraid to Ask For a Deposit

This might be obvious to some of you, but many of us have had clients balk at this. Many of those new to the field are not comfortable with doing this. And as many clients are also not too keen on handing over money for work that has not been done, or even in their minds, begun, we need to approach this situation both delicately and confidently. The more hesitant we are, the more our discomfort comes across, the more likely the client is to pick up on this and allow their resistance through. We need to simply let them know that we are completely committed to their project, and as we will be investing a large amount of time in it, we need to be assured that they are committed as well. The deposit not only shows they are fully on board, but you can assure them that it will guarantee priority and timeliness of the project on your part. It can be an uncomfortable subject to broach, but if you do not, then you might end up doing a lot of work and not getting compensated at all for your time.

Let Them Know You're the Expert

Sometimes, no matter how you run your business, you can still run into the occasional person who wants to lean over your shoulder and tell you how many pixels to move something over. The trick is try and not take on the projects for those kinds of people. However, you need to let your clients know you're the expert at your business, and respect that they're the expert of their's. We don't often dispute the word of our doctor, we accept their expertise. We need our clients to believe in us this way too. Image by Clarita Whenever a client makes a specific request for something you know is a bad idea, try turning it around and asking them what it is that's bothering them. Exactly what are they trying to solve? This allows you to first try and get to the root of the problem so that you can come up with a more appropriate way to solve it; rather than just implementing the bad idea. Even then, that sometimes doesn't work, and they insist on the bad idea. This is when you want to assure them that you know what they are trying to achieve and you gently push for them to allow for your expertise and knowledge to give them the best website possible. Strongly discourage going down this path, informing them why the idea could actually work against their goals. Let them know that you will do it if they insist, because you want them to be happy in the end. At which point you will want your objections to this course noted in the paperwork, pointing out that this is what they requested. That sometimes works. Writing it down makes it into a dramatic moment where they realize you don't want to be "responsible" for doing what they are asking, and they will then think twice.

You can almost never escape needing client approval on a design piece, but there is a way to elicit feedback properly without leaving yourself open to accepting inane or subjective input. When you approach your clients for feedback, rather than leaving the door wide open, you want to frame the questions in ways that the client will effectively be choosing between options that you are already on board with. If you have a question about the navigation, take them some variations on the idea to choose from. Instead of simply asking, "what are your thoughts on the navigation?" This prevents them from asking for something that is simply unachievable. This can also save time if they are not very clear on what they want. And sometimes they will know what they are looking for out of certain elements until they see it.

Always use a contract! 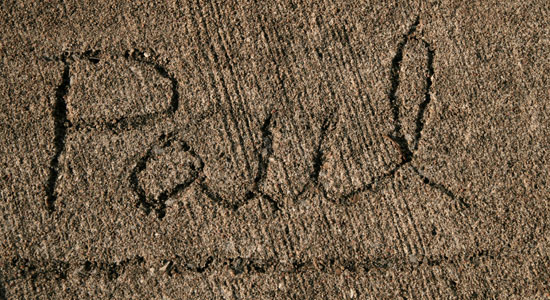 Because nothing is written in stone, so to speak, until the contract is signed. Image by Mary R. Voght And we have to remember that if we receive a contract, we need to check it over carefully. If there are any parts that are unclear or make you uncomfortable, do not be afraid to voice those concerns or ask for clarification. Most of the time, we will find the client receptive to these requests, we need only ask. Often times, a contract will be written by lawyers who are only looking out for their client, and they write for an apocalypse. You need to look out for yourself and make sure you are comfortable with the agreement, too.

Don't Do 'Work For Hire'

...unless you're actually being employed full-time! Work-for-hire is a term used in copyright law which grants full ownership and copyrights of your work to the person hiring you. By default, all freelancing and contract work is not work for hire. However, it can be written in to a contract (and even then, you still might have a case for arguing it, should you choose!). Technically, something is deemed work for hire if you created it while at a job which demands you be there full-time. Working from home, on a small project is not. You might think, "What's the big deal?" Well, if your client wants to retain full ownership and copyrights of the work, they need to pay a premium! Think of the difference of royalty-free stock photography versus rights-managed or full ownership. Owning the full-rights costs a lot of money. Also, most of us will want to include the piece in our portfolios, so taking that away comes with a price, too.

Working on speculation ("Do a home page design for me, and if we like it, we'll pay you.") is a terrible idea. Other people have said it better, so we will not go into a lot of detail here. If you would like a full rundown on the numerous reasons that spec work is bad for you and the industry overall, then go to No!Spec and read why it's so bad.

Don't Give Up Passwords or Files Until You're Paid

Let's look at it this way. The client has seen the flattened artwork and knows how things look and that you've spent the time on their project. At this point, it makes no sense for them to worry about you not delivering on the final product. You just want to be paid. If you turn over the files before you get paid, the client has nothing more to gain by paying you. You're just hoping that they end up being honest...

It is usually in your best interest to keep yourself password protected. Image by Szilard Mihaly Make sure the client knows this up-front. It's unfair to make it a surprise if they have a tight schedule to keep. The least amount of surprises in the end tends to work out in everyone's favor. So include this in the contract, and be sure to highlight this point once or twice when initial talks are beginning. The internet is full of freelance stories where the designer failed to put their foot down about this, and they ended up waiting months to get paid...if they were paid at all. Note: There might be some who would argue you shouldn't give up layered PSDs to the client. That's a separate discussion. For web design, when you're working with other developers, you kind of have to.

Write Down Your Policies

It may seem trivial, but for some reason, if you say, "It's my policy..." and you have shown this to them in the beginning, people will argue with you less. If it's a policy, people just accept it. Not entirely sure why this works, but it has often come in handy and proven itself as a worthwhile course of action for freelancers.

Being assertive is not being mean. It's having rules and standards and ways of doing business, and then sticking to them. It's drawing clear lines and boundaries and making sure everybody is on the same page. It's making sure you don't get bullied around by a bad client. Ultimately, clients will respect your ability to manage your business and they'll come back for more. What are your thoughts on ways to effectively assert yourself with clients? Leave us your two cents and personal experiences in the comment section below.
27
SHARES
ShareTweetLinkedin

Tevi Hirschhorn is a veteran designer with more than 10 years of professional experience. He is Lead User Experience Designer at Content Direct, and moonlights as a swashbuckling web designer in his spare time.

Home » Humble Freelancer, Assertive Businessperson – A How To