Keeeb, The Free Next Generation Knowledge Management System for Everyone

Bookmarking services are a dime a dozen. So, I wasn't too keen on checking out yet another iteration by the name of Keeeb. But, and I honestly mean it, I'm glad I did. Keeeb is not simply a social bookmarking service, it is a knowledge management system and it levels up the quality of my research on longer and more complicated articles easily. I am both an avid user of Pocket and Evernote Premium, yet Keeeb still closes a gap I didn't even know existed. Let's take a closer look, shall we?! 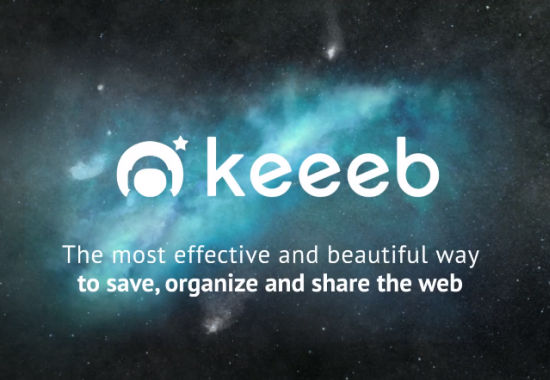 Keeeb has been around for over a year now. It is only since their recent redesign earlier this year that attention started to grow. Their latest effort, building an importer for the recently acquired and soon-to-be-closed Clipboard, put them into the spotlight of international media. And this is exactly where Keeeb should stay.

Keeeb is developed by a small, highly motivated team, residing in the beautiful city of Hamburg. From the first sketches, drawn in 2010 by Konrad Gulla, to the high-grade functionality Keeeb offers today, the team has grown to six members. As Germany, with their Samwers and Bohlens, has oftentimes been called the home of the copycats, Keeeb makes for a great exception and shows, that unique ideas are not limited to be brought up solely in Silicon Valley.

http://www.youtube.com/watch?v=RurrFp444yY A short introduction to Keeeb, more on their YouTube channel

At first sight, Keeeb does seem like just another bookmarking clone. You might even feel reminded of Pinterest because of the way Keeeb presents the keeebies (the saved snippets of content). In fact, Keeeb got designed at a time where Pinterest was not the hottest chick around the web. As founder Konrad Gulla puts it: "Pinterest was just the lucky one that was the first to get big."

Keeeb let's you clip bits and pieces of information from around the web and organize these snippets into pages. You can either use a bookmarklet in just about any browser or you can use the Chrome extension, plugins for Firefox and others are in the making. The Chrome extension adds the feature to be able to add a Keeeb page right from the extension, while the bookmarklet only allows for saving items to pages already existing.

To set Keeeb apart from its competition, let's look at Pocket/Instapaper, Evernote and Pinterest. If you are doing research around the web, you will most likely use Pocket or Instapaper and Evernote. If you are more into the funny side of life, you will surely like Pinterest.

Keeeb takes the fun aspect from Pinterest, being able to clip photos, videos and - what Pinterest is not able to do - text snippets and presenting the content in the grid-based Pinterest-style layout. Other than Pinterest, Keeeb allows for remixing the content from different sources. You can integrate text, photo and video from different sources into one keeebie. This resembles the So.cl approach, should anybody ever have come across this social network from Redmond...

Pocket and Instapaper let you save links in the form of whole articles for reading later. This is closest to what Delicio.us, Magnol.ia and others did already years ago with the difference, that Pocket and Instapaper focus on getting rid of once saved items after having read them, which is nothing a plain bookmarking service would want to do. The difference to Keeeb is, that in Keeeb you do not save whole pages (articles whatever), but you concentrate on only the relevant snippets.

Keeeb founder Konrad Gulla says, that the approach of Pocket or Instapaper and other read-it-later services does not solve the problems, information overload imposes on us. Instead, the pile of unread items stacks up and gets higher by the hour, a wrong track. With Keeeb you only save the relevant passages from articles, which - if you really do - surely adds value to your research. On the other hand, if I was able to read each article through immediately, I would not be such a heavy (in my case) Pocket user.

Let's go for Evernote, another service I cannot live without. I like Evernote lots and have it integrated into my daily routines, yet, what I do not use, is the ability of web clipping, at least not frequently enough to say it would be worth mentioning. Evernote's web clipper would theoretically be the equivalent to Keeeb's concepts. But, I don't want my research to show up as notes in my already crammed Evernote environment, I do not want to add notebooks for each new topic and I do want to have easier and more user-friendly access to what I store. Evernote web clipping really is no fun. You might object, work does not need to be fun anyway, but if I can combine the two, why shouldn't I?

Did I already advise you to just dive in and find out what Keeeb has to offer? Registration is free, no strings attached. You can use your existing accounts on Facebook, Twitter and Google+ to sign in, or you can open an account at Keeeb directly. If you are the curious, yet cautious kind, read on. I will lead you through the initial processes to show you what you'd be missing if you'd stay away...

Having signed up, we need to pull the bookmarklet into our bookmark bar or install the Chrome extension. Recently, the bookmarklet has been pimped to also be able to add Keeeb pages directly from there.

It is advisable to create a Keeeb page now. You never start alone, though. With the opening of an account, Keeeb already created your first Keeeb page for you. You can as well start "keeebing" and care for renaming that page later.

Having arrived at a site, from which you'd want to store content snippets, you' click either the bookmarklet or the extension's icon, both of which will bring up the same floating toolbar like this:

Once the toolbar is shown, Keeeb is ready to store content. If you hover photos or videos these will get covered by a blue translucent overlay, indicating that they can be stored to Keeeb. Once you click a photo, like I did in the following screenshot, another modal window will pop up, allowing you to save the photo to Keeeb. 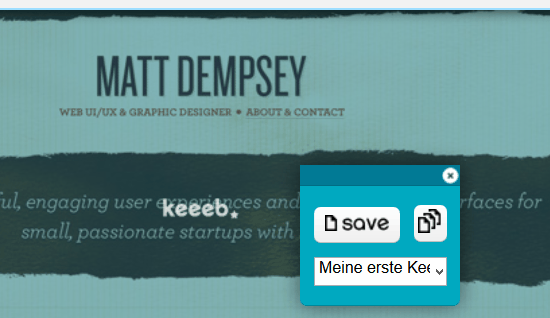 The icon with the stacked pages allows you to store items into one keeebie, while per default each snippet generates a separate keeebie. Chosing another piece of content, such as another photo or some text and clicking the stacked-pages icon would lead to the snippets being added to the first keeebie created.

If you want to rearrange your content later, you can as well just click "Save" each time you want to store anything. Rearranging content can be done easily from inside Keeeb later on. That pretty much sums up what you are able to do from outside Keeeb. Let's see, what we can do from the inside...

Logged in to your Keeeb you are presented with what others are keeebing. From the top bar you can choose "My pages", followed by the page you want to work on. I choose "Keeeb-Recherche". 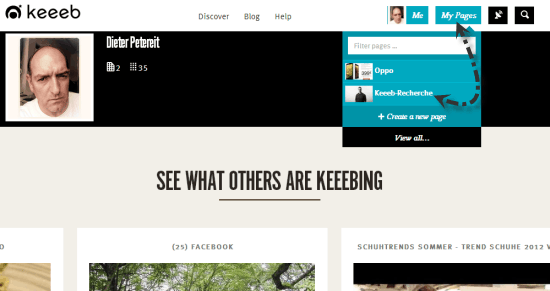 Here I stored two keeebies I want to rearrange into one. And this is how I do it: 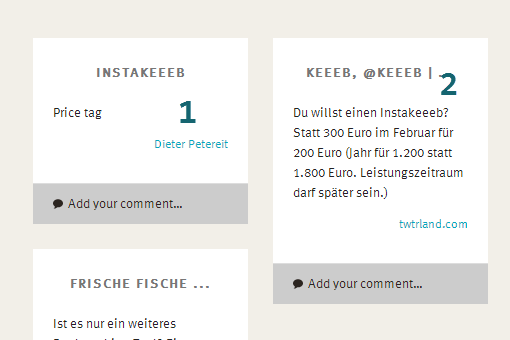 These two items are bound to become one 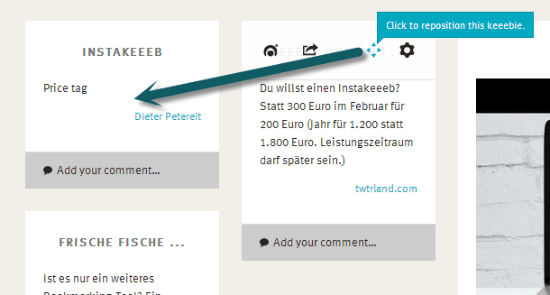 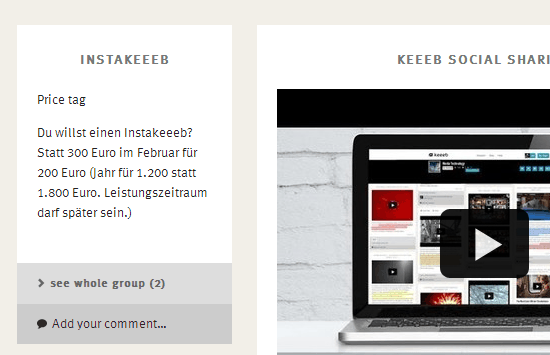 The two are combined

Be careful what you drag and drop onto what. I couldn't easily find a way to rearrange rearranged items. If you drop an image on a text, the image will be put under the text, while usually you will want this the other way round, so make sure to always drop text on images. (Edit: Clicking "see whole group" gives you ways of rearranging, a reader tells me. So try that.)

Any Keeeb page you create is privately built and only visible to you. You can change the status to "public", which will let anybody with the necessary link to it view, but not edit it. Or you might want others to collaborate. In this scenario we would not change the page's status to "public", instead we'd convert it to a "team page", which is easy. 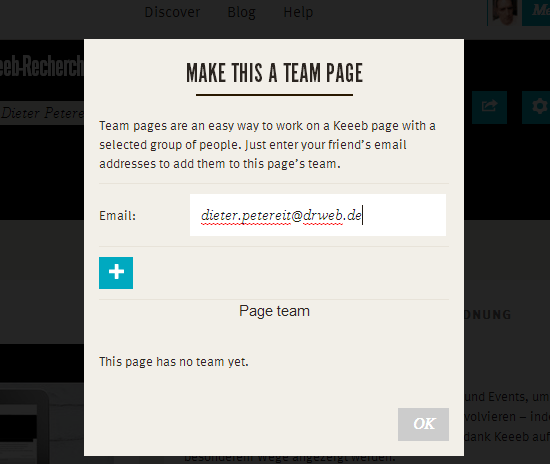 All added users will receive an invitation mail. Once they click on the contained link, they will gain access to your page. You will get notified like this:

A user has accepted your invitation

From then on, you are able to populate the Keeeb page together.

Keeeb: More Features and Some Missing

What else can we do in Keeeb? We are able to add comments or have others add comments on public or team pages. We could share a keeebie to Facebook, Twitter or via email. Keeebies can be rekeeebt, which is pretty much similar to a retweet. The layout is changeable from a flexible Pinterest grid to a fixed row layout which makes it easier to sort your keeebies. And, we can add notes. A note is a keeebie containing text notes you write manually. Notes can be grouped with other items. If you want to keeeb private photos or videos, you need to upload them somewhere from where you can then invoke the Keeeb toolbar upon them, like a Picasa album or simply your Dropbox. According to Konrad Gulla, the team is already working on implementing a file upload possibility.

Brands might be interested in a commercial feature named Instakeeeb. An Instakeeeb has to be created by the Keeeb team and will then automatically collect photos from Instagram as well as Tweets equipped with a chosen hashtag into one giant keeeb page, perfect for events. Up to now, this is the only feature you would need to pay for.

Today, Keeeb does work in mobile browsers, because of its responsive approach. Yet, it doesn't offer any native apps for any of the mobile platforms. This will change, but for the foreseeable future you will have to do without. As the editing capabilities rely on hover, you will only be able to view your Keeeb pages on mobile, while most of the advanced functionality will not be available.

As Keeeb is constantly improving, make sure to check their blog regularly.

Whether on your own or as part of a team, Keeeb helps you research effectively. As you only save the meaningful parts of your sources, you won't have to reread dozens of articles later on. In teams, Keeeb is simply incredible. In fact, I do not know of any other tool more capable when it comes to collaborative research.

Looking at the Facebook-ing, fun-sharing generation, I am not sure whether Keeeb will be able to unhorse Pinterest, as the latter does in fact look a whole lot prettier, which definitely is a serious argument in non-serious use cases.

What about me? I will keep using Keeeb, though not in every case. Keeeb is added value where research efforts exceed the daily average, e.g. elaborate articles with complex background or long lists of different items from different places. In these situations Keeeb will definitely reduce information overflow and help stay focused more. In all other cases, Pocket will have to suffice...

Home » Keeeb, The Free Next Generation Knowledge Management System for Everyone