2
SHARES
ShareTweetLinkedin
By Robb Clarke There are a lot of misconceptions when it comes to social media. People seem to think that every day standards and decency get tossed out the window because of the anonymity of the Internet. Unfortunately for those people, that’s not always the case. First off, the Internet is getting smaller, and by that, I mean that it’s getting easier to find out who people are. You know how the saying goes "It’s a small world." That reigns true for the Internet, especially social media sites, as well. Everyone is connected one way or another. There’s a whole "Six Degrees of Separation" thing going on. There are Ten Commandments of Social Media that you should always try to follow. They will not only make you a better person but they will make your followers that much more appreciative of what you have to say.

1. Thou Shalt Not Be a Narcissist

Social media is not all about you. It’s about people. It’s about being social, hence the name. Take the time to engage others in conversation. Don’t simply sign on and post something about yourself and leave. For every one post that you make about yourself you should dedicate at least three to engaging others in conversation whether it’s Retweeting what they’ve said, commenting on their photo album or asking them how their day is. A little bit of human contact goes a long way in the social media world; after all, human contact is what the whole concept is based off of. You need to immerse yourself in the community and become part of the conversation. Social media is about relationship building and if you’re just spouting out posts and Tweets about yourself then people will quickly lose interest in you and what you have to say.

2. Thou Shalt Listen to What Others Are Saying

This ties in with the previous commandment; social media is all about engaging others in conversation and to do that you need to first listen to what others have to say. Actively participating in conversation helps build relationships and listening is the most important part. There are a lot of tools out there that will not only help you listen but will also help you engage. Tools like TweetDeck are fantastic tools for monitoring and engaging the conversations that are happening. TweetDeck is fantastic because you can not only monitor the obvious Twitter but you can also monitor Facebook and multiple other Twitter accounts. 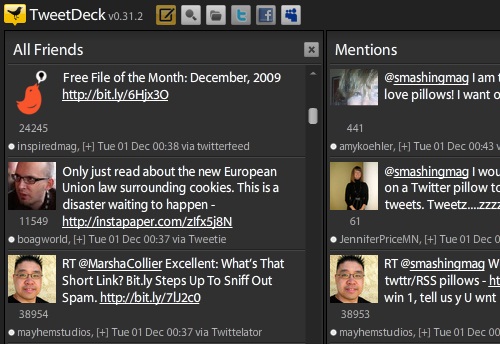 3. Thou Shalt Not Spam

If you’ve been using email for the past 15-20 years then this shouldn’t come as a surprise. Don’t spam your friends and followers with links and chain letters other useless nonsense that just gets tossed in the trash or deleted. Be courteous to others. Just because you think it's cute to show 26 pictures taken milliseconds apart of your 9 month old rolling around on the floor doesn't mean that anyone else will. Think about all of the things that make you roll your eyes when you read them on social media sites. Now think, do you do any of those things? If so, stop.

4. Thou Shalt Say Something of Substance

How often do you get online to find Joe blabbering on about his latest conquest at the bar or how many Filet o'Fish he's eaten today? How many times have you seen Mary complain about how she didn't get enough sleep last night or how her friends annoy her? Do these people really actually say anything? Usually not. Far too often people take to social media sites to air their dirty laundry and complain about something and why? Would they be doing the same in front of a group of their friends, peers, coworkers, and prospective employers? Probably not. So why online?

Scott Stratten from UnMarketing made a great Tweet about posting on Twitter but the same applies for all social media sites. He said "Don't tweet anything you wouldn't want to see on a billboard with your name/face/logo/phone # and your mom driving by." It's true. You wouldn't be saying half of what you say online if it was real life so why do it? If anything what is said online is worse for your reputation than saying it in person. Why? Because it's posted online and people can find it and reference it at any time. The rule is simple; watch what you say and whom you say it to.

5. Thou Shalt Not Abuse Thy Neighbour

Tying in to the previous Commandment comes another Commandment that you would think would be pretty obvious but sadly it's overlooked. Don't abuse people online. Flaming on the Internet is just about as old as the Internet itself and it's just as unacceptable as it has always been. No one wants to go online and be verbally assaulted for his or her beliefs and opinions. It's not good form. You know how the old saying goes; "If you can't say something nice then don't say anything at all." Just because you're online doesn't make it acceptable to do. Chances are that you're not going to openly mock or humiliate someone in person so why do it online?

6. Thou Shalt Give Credit Where Credit is Due

This is a Cardinal Sin in most circles, especially on Twitter. Stealing someone else's ideas, quotes, pictures, whatever, are incredibly taboo not to mention amateur. You wouldn't want someone coming along and stealing your intellectual property and posting it as his or her own now would you? Here's an example of the proper way to give someone credit for what they've said on Twitter.

How to Retweet Properly Note that it's perfectly acceptable to truncate words or paraphrase what was said if Retweeting takes up more than the allotted 140 characters.

7. Thou Shalt Learn How to Spell (or at least use a spell checker)

This one should be pretty obvious. Learn to spell and use grammar and punctuation properly. It's incredibly hard to take what you're saying seriously if it's full of grammatical errors or you've mixed up your to, too and twos. It's not the hardest thing in the world to run your blog post through a word processor like Word before you post it. It's actually in your best interest to type the whole thing in there in the first place regardless. For those that are Tweeting or updating their Facebook statuses try using Mozilla's Firefox. It has a built in spell checker. It won't catch all of your spelling mistakes and it doesn't catch grammatical or punctuation errors but it will put a dent into your typos.

8. Thou Shalt Use Real Words

The previous Commandment is the perfect segue into this next one. Please, for the love of all things holy, try your best to use real words. Seriously. Social media sites have turned people into absolutely horrible spellers and text and instant messaging aren't doing people any favours either. Quit with the OMGs, the LOLs, the WTFs and the ROFLs. Neil Patrick Harris had a brilliant Tweet making fun of people doing this. He said "Prfkt. Thx 4 L th advyc evry1. This s a way ezr way 2 cmuNik8. Un42n8ly, itz takn me 3 hrz 2 ryt, but itz much pre4d 2 gtn cut off lyk i u". I don't know what he said but that's what he said. It shouldn't take 140 seconds to try and decipher your 140 characters on Twitter. I know you're doing it to "save time" but did you really save time? Did you actually cut seconds off of your posting time or did it really take you minutes longer to be "clever" and come up with those new words? Think about it.

9. Thou Shalt Not Bear False Witness

Websites like TinyURL, Cli.gs and Bit.ly all offer a brilliant service; they take your exceptionally long URLs and turn them into short and sweet ones, perfect for the character limiting Twitter. These sites do have a downside though, they enable people to hide spam, porn or even the passé Rick Roll (yes, people are still doing that) in masked URLs. When URLs are hidden like this users are unable to see where they're headed and are often lead to undesirable websites. Be courteous to others and don’t hide links using these services. That being said; these service providers do attempt to warn users of malicious websites that may be hidden in shortened URLs so there is light at the end of the tunnel. On a related note; how many social media "experts" have you seen on Twitter that claim they know the key to being successful in both business as well as on social media sites? There are thousands of them out there. Do you know what their magic key is? The answer; our last Commandment. 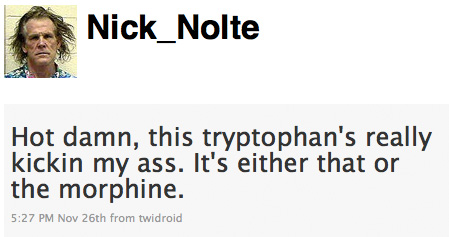 10. Thou Shalt Not Be a Friend Whore

Last but certainly not least is our final Commandment of Social Media. Don't be a friend whore. Social media is not a contest to see how many friends or followers you have. Having thousands of followers does not make you a better person or show that you're a better quality user. It's incredibly common to see people on Facebook and Twitter adding as many people as they can as their friends in hopes that they befriend them in return simply to accumulate higher numbers.

Friend Whore Follows Three Users for Every One That Follows Them Social media is not a contest. Plain and simple. Following these Ten Commandments of Social Media will not only make you a better user of social media sites but they will also make your friends and followers appreciate you that much more. They aren't hard to follow. Give them a shot.
2
SHARES
ShareTweetLinkedin