Waypoints.io: Collaborative Tumblr for Your Projects

Waypoints.io is a London based service aiming to help you with project management. They are currently in public beta, so for now accounts are free. We have taken a look at what to us looked like kind of Tumblr for projects. And you know, Tumblr’s developer will spend the rest of his life under palm trees, sipping caipirinha and getting off to the numbers on his bank accounts. Will this happen to the master mind behind Waypoints.io, too? 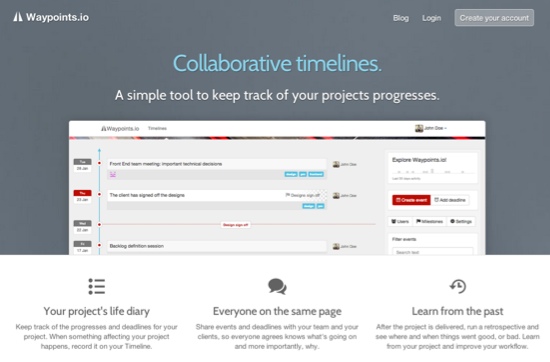 Waypoints.io Documents the Progress of Your Projects

Waypoints.io claims to offer collaborative timelines to help you keep track of your projects progresses as they happen. The sentence is more or less a quotation, so let’s work through this together.

We can expect timelines. We know timelines from Facebook and other life loggers such as Tumblr. A timeline-oriented approach focuses on the course of time, displaying events in their chronological order.

We can expect collaboration, which basically means, more than one person can work on a given timeline. In this case, anyone who got invited by the owner of the timeline will be able to collaborate.

We are going to keep track of your projects progresses as they happen. Our collaborative timeline is primarily a way of documentation. When did the project start? Who was involved? Which dates have been agreed upon and when? Were there delays or other problems? Add events as they happen…

Were you able to get a proper idea of the concept behind Waypoints.io by now? Let’s look at it from another angle. Waypoints.io is not a task management system, nor is it a project management tool, nor is it a planner, nor is it some kind of calendar or a tool to collaboratively edit things on. In short, it is nothing we already know. So what does it actually do?

Once you’ve signed up for a free (at the moment) account, you are taken to the timelines overview. From here you get access to all the timelines you created or have been added to.

Clicking a certain timeline opens it. Depending on what has already been stored, a timeline might look like this. 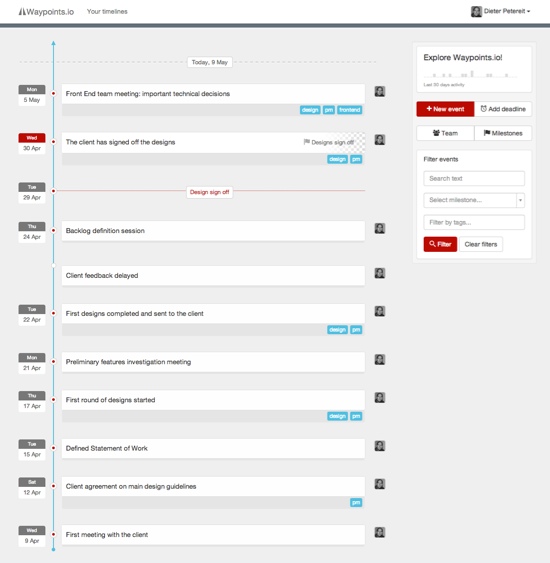 The view is not very impressive, right? But think again. You are looking at the chronological history of a running or even finished project. You are enabled to recall every single important event, that has happened throughout the course of the project. This is a value in itself.

I have had quite a few problems in the past with clients claiming this and that had been agreed upon much earlier than I knew it had been. Waypoints.io lets you keep track of exactly what has happened when. It is like a diary, but for projects.

Instead of just putting down what has already happened, creating future dates in the form of deadlines is also possible. That way, we get calendar functionality and a touch of project planning, while you shouldn’t expect too much here. A deadline is just a different form of an event, displayed differently.

Events can be also be created for future dates, so nothing hinders you to lay out the planned timetable of your project beforehand. Events can be assigned to so-called Milestones. Yet, the milestones in Waypoints.io are more like a tag, with no more substance than their names to them.

The most powerful element in Waypoints.io is the event. Events have a title, optional notes with formatting options, an event date or the status “confirmed”, which says the event has already happened, tags and a connection to a milestone.

Once you’ve created an event, you can upload file attachments to it. Attachment can stem from your local drive or from Google Drive. Attaching files from the Google Drive requires you to allow Waypoints.io full access to your Drive account. Adding files from there does not free you from the need to additionally share them with the intended collaborators from inside Drive, though. This kind of collaboration feature is weak, to say the least.

And that’s about it. You cannot comment on events, which I see as a vital necessity. Discussions are not possible. Neither on events, nor on files, nowhere.

But, if you need a pure means of documentation, Waypoints.io is well worth a look. We’ll have to see what they are offering once the beta has ended. In my opinion, the current feature set does not allow to charge anything for it.

To sum it up, get your own impression by watching this one minute video. Perhaps I’m missing out on something:

https://www.youtube.com/watch?v=4jJeP7Z4k1g Let's get back to the question from the first paragraph. Will Waypoints be the Tumblr of projects? I think, chances are low...