426
SHARES
ShareTweetLinkedin
On February 10 this year a new creative design software was unveiled: Affinity Photo by Serif debuted in beta and is currently available for free, exclusively for Mac OS X. The app claims to be a pro-level challenger to Adobe Photoshop, the undisputable top dog and standard in the publishing industry. After the beta phase, Affinity Photo will be available at the Mac App Store, at an estimated price tag of £39.99 (€49.99/$49.99). So let´s have a look under the hood of this new software and check it against its overwhelming rival, Adobe Photoshop.

Right now, Affinity Photo is in free beta stage. Everybody can register to use and test the software in-depth without grabbing a credit card. First thing to notice is how really fast the app opens. Affinity Photo needs less than half the time to be ready to operate compared to Photoshop. Is this due to its smaller feature set? The look is modern, clearly organized and comes with a cool, darkish UI. Photoshop users feel right at home, because tools, functions and other essential elements can be found at familiar positions. 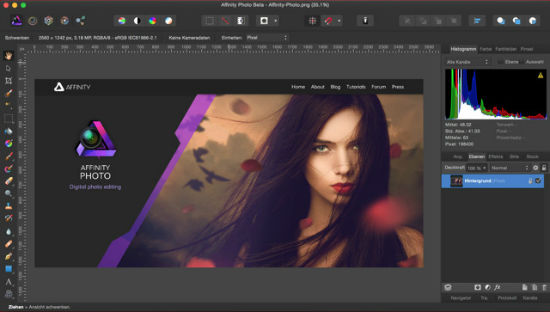 Affinity Photo explicitly targets designers and photo enthusiasts who rely on such a software product every day. Professional photographers benefit from features like frequency separation editing, live blend modes, inpainting, and advanced retouching. Unlike other alleged Photoshop contenders this app comes with end-to-end CMYK, 16-bits per channel editing, LAB color space, RAW processing, ICC colour management, compatibility with Photoshop PSD files and 64-bit plug-in compatibility. Affinity Photo is compatible with OS X Lion 10.7.5 and newer on the Intel Mac 64-bit platform and is currently available in US English, German, Spanish, and French. Affinity Designer users will be pleased to know that both pieces of software work together flawlessly and intuitively, almost seamless. Since the beta version is pretty fresh, it is still too early to tell if it is possible to import all popular Photoshop actions. Anyway, the plug-ins and styles for Photoshop can definitely be used with Affinity Photo.

For comparing both applications we used Photoshop CS5, although we had the more recent version available. We figured this the most probable scenario for users willing to change their workhorse. Why? Because designers who shell out their bucks for their yearly update obviously do not oppose the subscription model that much in the first place. As the latter actually costs less than the yearly update did before the CC came, they even save money now. That said, why should a content CC subscriber long to switch to Affinity? No, we just can´t imagine that. 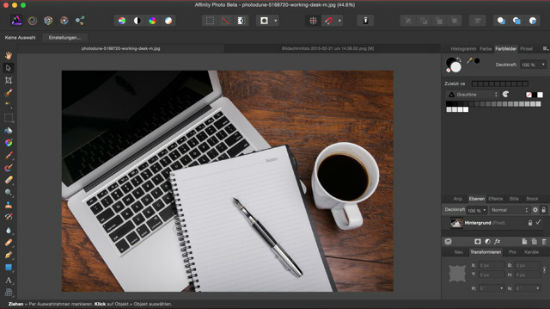 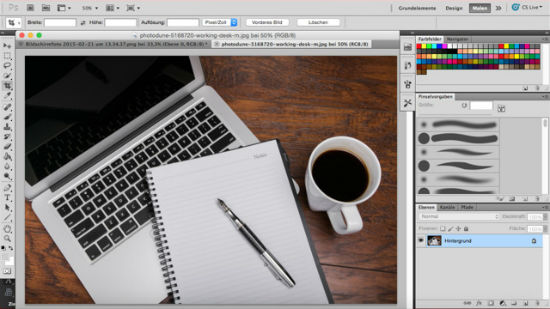 Using Photoshop CS5, I recognize Affinity Photo´s retina display support instantly. That comes as no surprise since CS5 was made in 2011 and, therefore, could not be developed with such a feature in mind. What is also easy to spot is how similar elements, tools, and functions are arranged. The tool area on the left serves multiple functions at either application. The area on the right is also organized in a similar fashion. However, the real difference sticks out immediately: with Photoshop you will find a lot of action going on at the right-hand area, which does not exactly support better clarity. Affinity Photo chose a different path, putting much stuff to the top bar, clearing the way for, well, more clarity. The upper bar can be adapted and optimized according to specific requirements. Both applications share a lot, not least the multitude of features. No doubt, though, Photoshop still has way more functions and commands a bigger following, i.e. community. This, of course, comes naturally, since Adobe´s behemoth is alive and kicking for 25 years. Many of Photoshop´s functions are also part of Affinity Photo. They are placed in the same positions as in the former most of the time. The most commonly used filters reside at the same location in both applications, although Photoshop comes loaded with several more filters than its more affordable rival - if only to justify its price tag.

Saving images for the web: a comparison

Being an author, the feature I use most is cropping and saving images for web usage. So I think it´s pretty interesting to compare both applications here using the same settings. I can imagine this applies to most of the bloggers out there who often work with imagery. These were my settings: quality 80%, crop to 640 px, and the setting "Bicubic". The original picture had 647 KB and 1,732 x 1,155 pixel. Affinity Photo example image (70 KB): 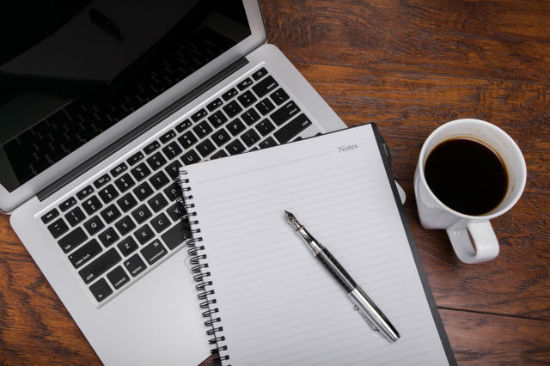 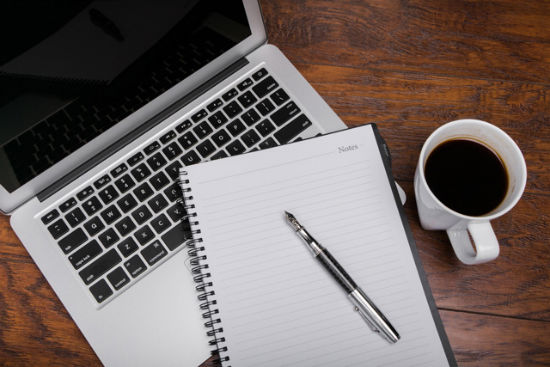 The difference in file size is huge. Of course, Photoshop´s version has a better quality, but that also means a significantly higher file size. Keeping SEO and site performance of an image-heavy website in mind, Affinity Photo clearly is a step ahead here. Even with just a handful of images per article this saves you a lot of speed-slowing file data.

„Save for web and devices“ is called „Export“ here, right under the „File“ menu item. This functionality is pretty comprehensive. It is possible to not only save as PNG, GIF, or JPG, but also as TIFF, PSD, and PDF. Affinity Photo´s saving options - "Export" 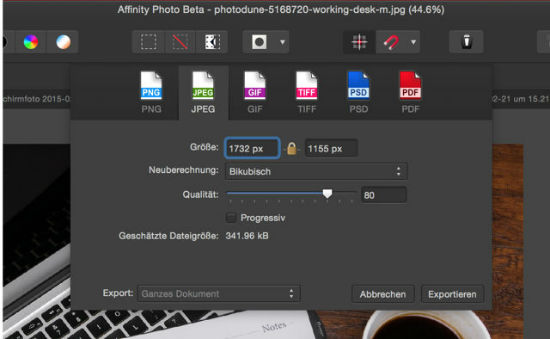 Photoshop´s saving options - "Save as" 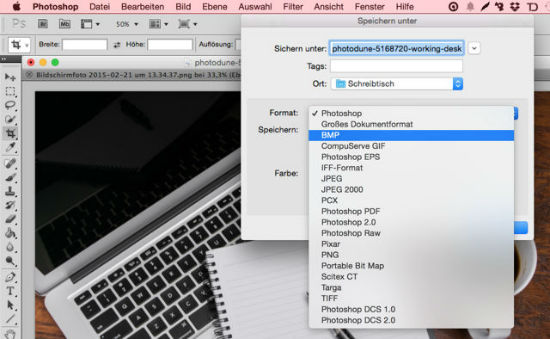 Including Photoshop´s „Save as“ features here, this more pricey software offers a lot more options to save your stuff. Over at Affinity Photo, there are no further file formats available, because „Save as“ only provides the native file format, nothing to choose from there. Nevertheless, considering the small price of just £39.99 (€49.99/$49.99) Affinity Photo´s saving features are pretty nice and certainly sufficient for most usages.

The good thing about Affinity Photo´s UI is its neat clarity. All modules are active by default and displayed. Of course, there are way less than in Photoshop. On the other hand, this makes it so much easier to navigate the menu. Gaussian Blur 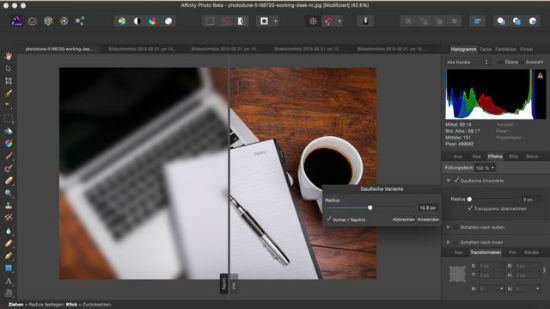 Photoshop offers a lot more filters. Still, the question remains: Do we need all this stuff? Yes, Affinity's filters are less in multitude but they can be used intuitively. Getting familiar with the new app is quite easy, leading to quick and satisfying results. Unsharp Mask 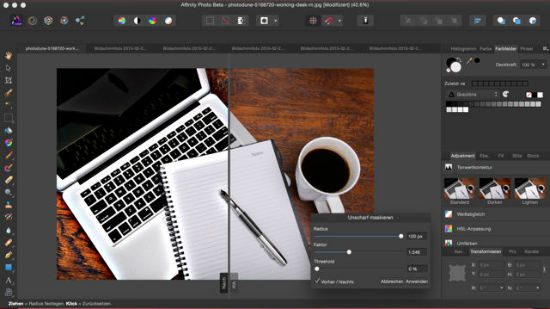 Photoshop offers much more sharpness filters. Although, „Clarity“ and „Unsharp Mask“ should be sufficient. Working with copy Basically, working with Type tools looks rather simple, even more simple than with Photoshop. Once written, copy can be moved freely, zoomed in, and resized. Angle adjustment is just as easy: take the text frame and move it any angle you want. Again, Photoshop´s options are far more comprehensive, but they are less easy to use. 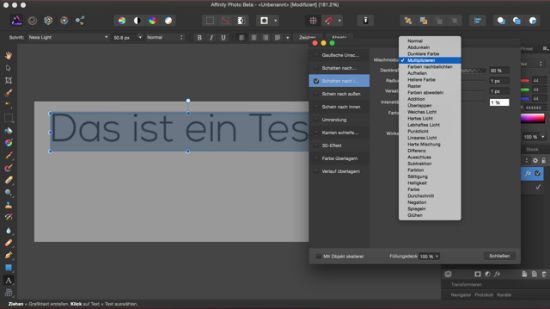 I miss the „Overlay“ feature for text shadows, though. I´d put this on my wishlist for the finished version. 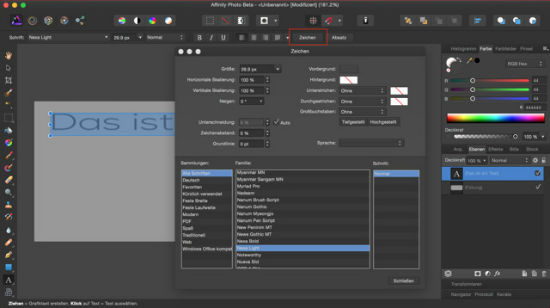 I like Affinity´s „Sketch“ feature pretty much. This gives their app clearly an edge compared to its big rival.

The multitude of photo editing features has certainly been an important reason for photographers to buy Photoshop. At the „Camera Raw“ section, there are so many details you can influence and adjust manually, as long as it is a JPEG-/JPG- oder RAW file. 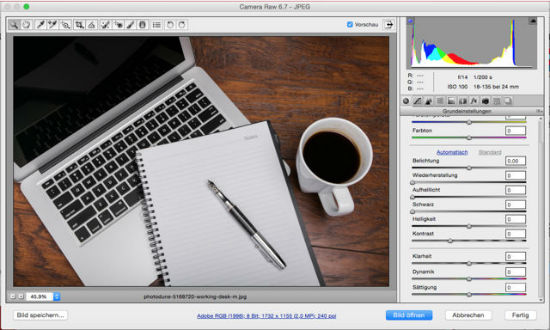 Both applications can handle the RAW format, a very important feature for professional photographers. 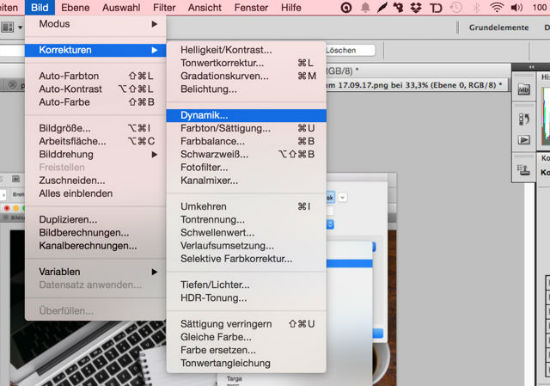 To better show all options, I took a detour via layers. All functions are easy to access at the right sidebar, nevertheless. 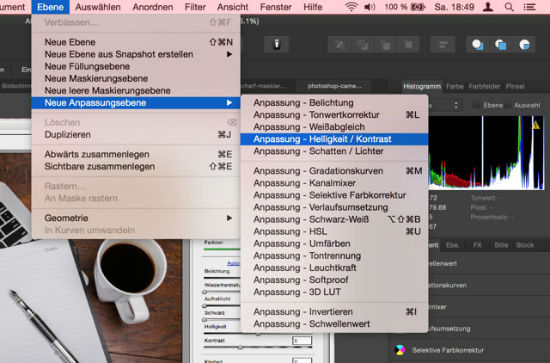 Photoshop has some more options here, too. The convenient auto corrections can only be accessed via the menu, though. In contrast, at Affinity they can be easily found at the top bar. Some might find this easy access more convenient. Affinity Photo´s easily accessable auto correction features for photo editing

Comparing auto corrections side by side

In order to perform a direct comparison between the image auto correction features, I chose a not particularly good picture and let both apps´ auto correction tools work their magic. I provide another link here showing the original image, giving you a better idea of what both applications are capable of. I used „Auto Saturation“, „Auto Contrast“ and „Auto Color“ in Photoshop, and „Auto Levels“, „Auto Contrast Correction“ and „Auto Color Correction“ in Affinity´s software. Original image – The Hamburg Haven Clicking the image opens the original file 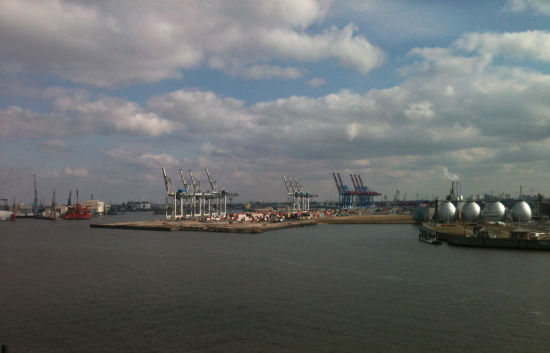 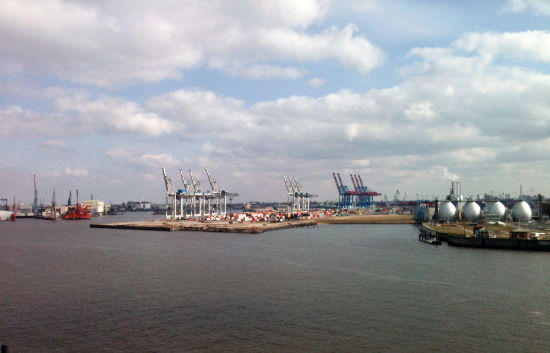 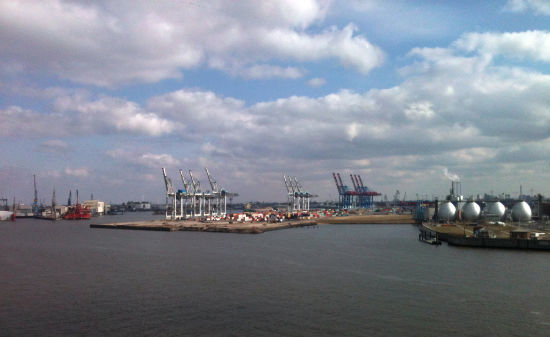 To be sure, both contestants come up with good results. It´s up to the viewer to decide who wins.

Affinity Photo offers several distinct workspaces, called Personas. These are modules that provide different tools for various, specific functions. Currently, they are Photo, Liquify, Develop (for Raw images), Macro (for recording actions) and Export. A close analogy would be Photoshop’s workspaces, but still it´s different. This is how you access the Personas:

Using the Liquify Persona you get surreal distortion and warping effects. 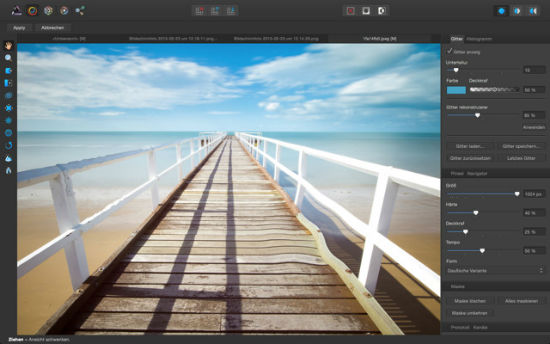 The Export Persona offers various options to export images, layers or slices to a range of formats, like a threefold file size. 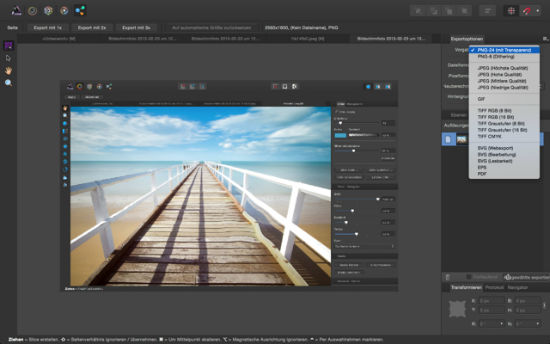 Photoshop: Photoshop offers a comprehensive set of options for editing RAW files within Camera RAW. One feature that is missing in Affinity Photo´s current beta version is rotating (90 degrees clockwise and contraclockwise), respectively. 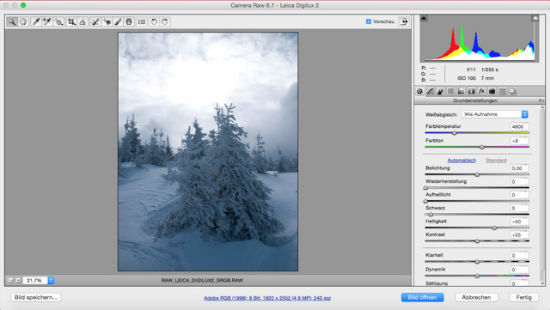 Affinity Photo: Other than that, when it comes to editing RAW files, Affinity Photo is no doubt on par with Photoshop. I would even say it looks as if its options are more wide-ranging, barring the rotate feature. All those options are bundled up in the Develop Persona. 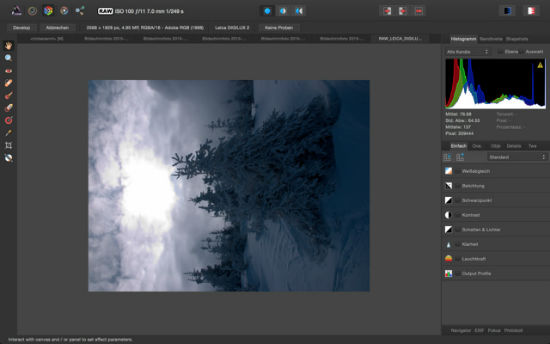 When working with the Develop Persona, Affinity´s right sidebar is exclusively reserved for RAW editing and offers a wide variety of features. 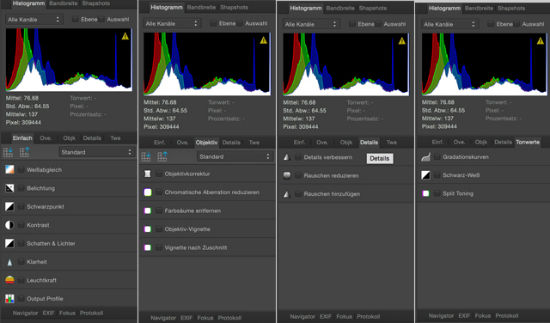 The Macro Persona for recording actions is unfortunately not working with my beta version (1.1.2.22821). That´s why I´m not able to make a statement about this feature.

Even at beta stage, Affinity Photo looks like a true and serious alternative to Adobe Photoshop. Considering the planned retail price, the vast variety of features is just amazing. At the same time, the software emphasizes a clear, comprehensible workflow. Many things can be done intuitively, everyone who already worked with Photoshop will be immediately familiar with Affinity Photo. Sure enough, some features will take some getting used to. But the learning curve is considerably steeper compared to Photoshop´s. There are no tutorials or documentations yet, but it is possible to ask questions or suggest ideas at the Affinity forum. Noupe reported about alternatives to Photoshop in the past.