203
SHARES
ShareTweetLinkedin
Of late, Pinterest has taken the social networking world by a storm. Pinterest makes it extremely easy to find and share content of your liking and interest. Whether you prefer typography, or are into photography and interior décor, you are sure to find many like-minded individuals on Pinterest who are sharing content related to your topics of interest. Further more, if you like design inspiration and infographics, you should really be on Pinterest. In this article, we are showcasing some Pinterest users who are sharing awesome stuff using their pin boards – not just any stuff, but content that is especially useful for designers. So take a look down through this collection of design-related Pinterest boards, and start following these along today.

Dainis Graveris is the Founder-Owner of 1stWebDesigner.com. With over 5000 followers on his Pinterest page, Dainis is surely one of the “must-follow” persons on Pinterest. His most notable pin boards include 'Web Design Trends', 'Fonts', and 'Technology and Design News'. Also, just in case you are new to Pinterest, Dainis Graveris has a pin board meant just for you – 'Guides to Pinterest'. 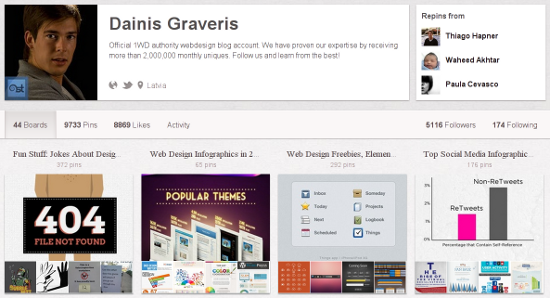 Paul Andrew is the Owner of Speckyboy Design Magazine. Apart from usual infographics, he shares interesting stuff such as 'Books Worth Reading' and 'Resources Worth Taking A Look At', in addition to design inspiration and other such related topics. 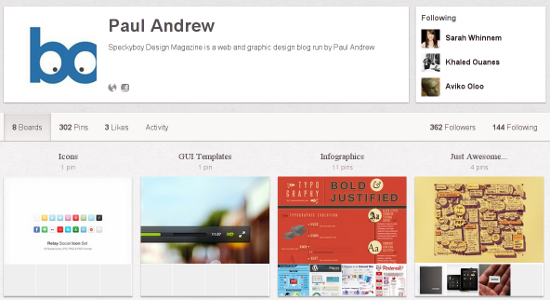 Russ Burtner is a Senior User Experience Research Scientist by profession. Sounds big, doesn't it? He mainly shares stuff such as typography, art and photography, along with all genres of design (architectural, interface, industrial as well as product design). 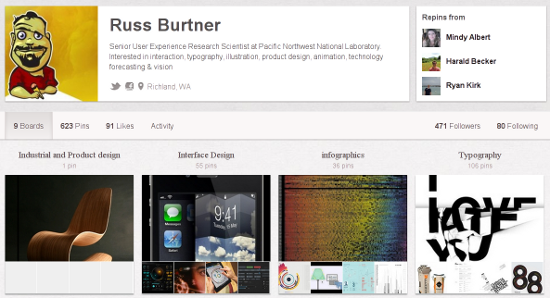 Design Quixotic is the pin board of Thea, a graphic designer from NYC. It focuses mainly on design-related aspects, such as typography, graphic/web and product design, logos/icons as well as book covers and wedding invitations. 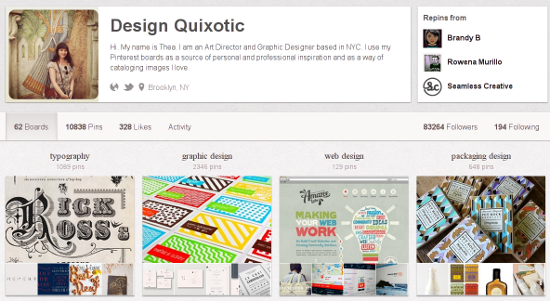 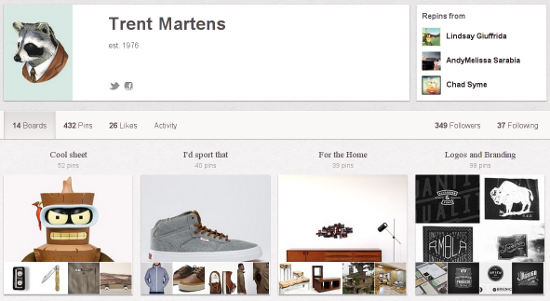 Mattias Ahlvin does not share content related entirely to web design, as there are pin boards for topics such as Politics as well. However, there is an interesting and content-rich board about HTML and CSS, along with separate boards for pixel art and WordPress. 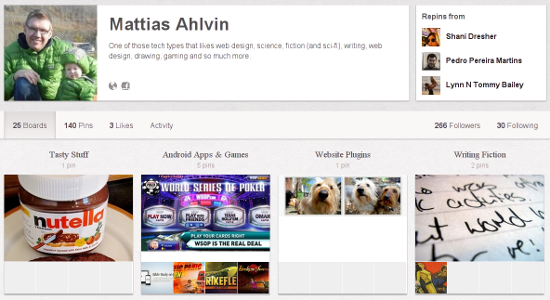 Jen Vasseur is a freelance web designer and developer. Major pin boards include those related to design, coding and fonts. Furthermore, there are also separate boards about interesting websites and 'Websites That Need Help'. 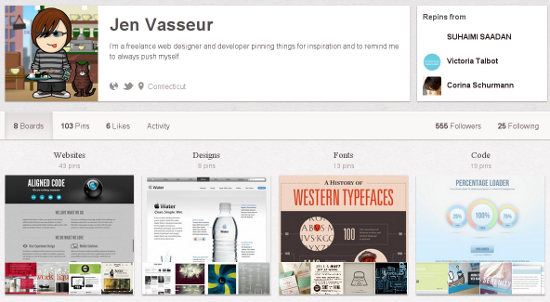 Paula Cevasco is a graphic and user interface designer based in Argentina. On this Pinterest page, you'll find boards catering to different types of design, such as web, architecture, and so on. 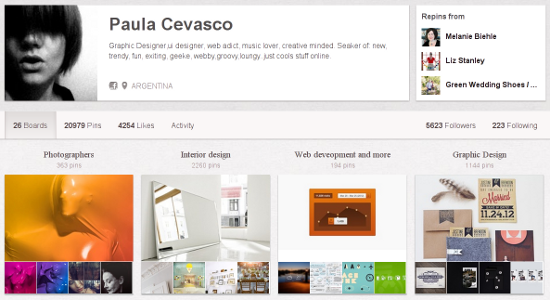 Samantha DeMott is a graphic and web designer based in Washington, DC. The pin boards on her Pinterest page share stuff related to design, especially inspiration and package design. Also, the infographics' board has a very interesting line-up and is definitely worth checking out. 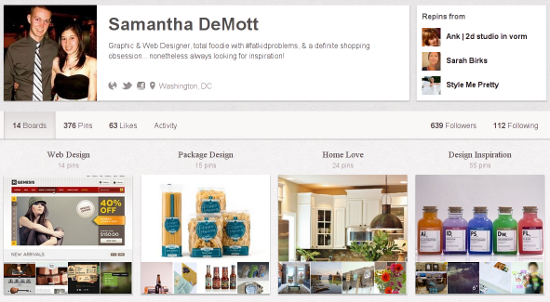 Sixtyseven shares things related to logos and brochure design on Pinterest. There are a couple of other boards too, but they aren't so well populated. 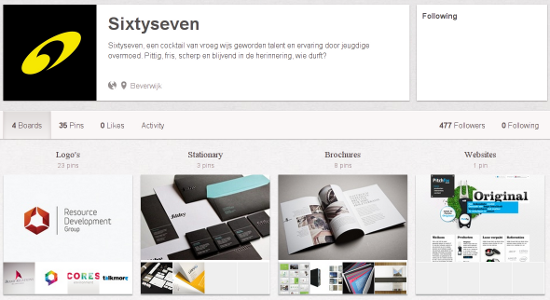 COLOURlovers has over 6000 followers on Pinterest. The pin boards are in perfect harmony with the brand name – BLUElovers, BROWNlovers, GOLDlovers, WHITElovers, and so on. Beyond that, there are genre-based boards as well, such as PHOTOGRAPHYlovers and PRINTlovers. The total number of boards is over 70, and the pin count is well beyond 3000. Obviously, this is one of the most active Pinterest profiles out there! 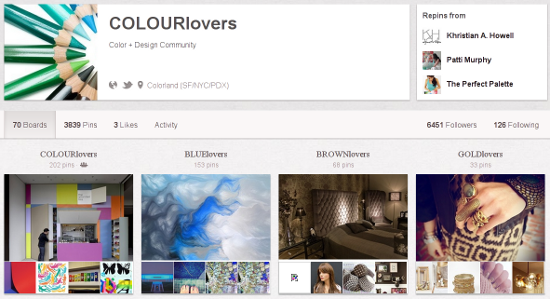 Graham Smith is a graphic and logo designer from the UK. With over 2000 Pinterest followers, he shares stuff mostly related to logo design. There are some interesting boards, such as 'Batman Logo Evolution' and 'Vintage Packaging'. 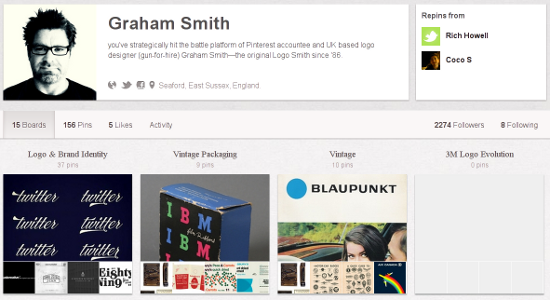 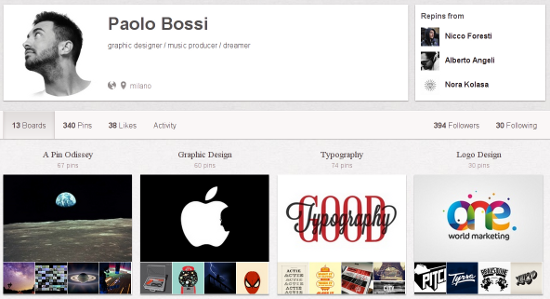 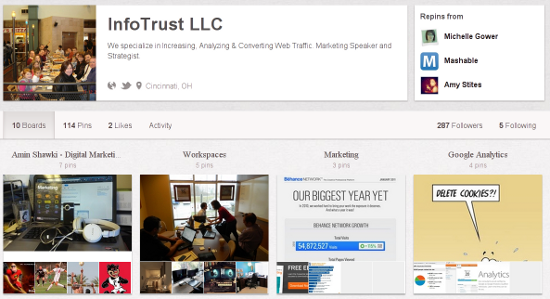 Ophelia Quixote has over 1400 followers on Pinterest. Most interesting pin boards included 'Art I Heart', 'Photo Ideas and Inspiration' and 'Patterns and Colors'. 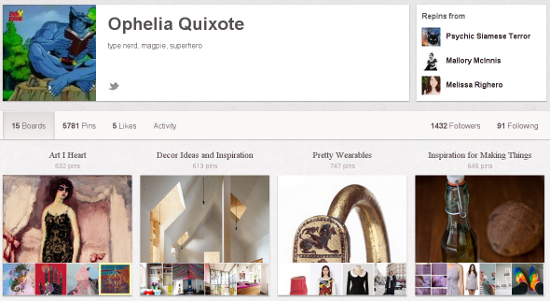 Stu Greenham uses Pinterest the way it is supposed to be used– to organize and share things he personally likes (or, probably, dislikes). Just along side Typography, you'll find 'Favourite Fonts', and other mutually resonating boards such as 'Books to Read' and 'Books I've Read'. Terrific way to personalize social media, isn't it? There is also a separate pin board pertaining to Facebook Timeline Covers. 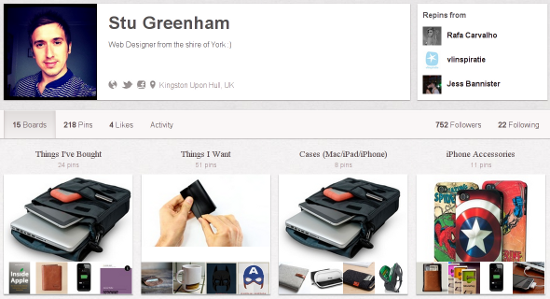 Niki Blaker, a visual designer, has created boards about typography, animated GIFs and illustrations. Just in case you are looking for some awesome artwork, check out her pin board 'Mexicana Floral Embroidery'. 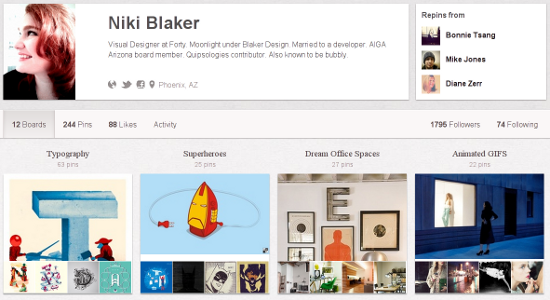 Having over 4000 followers, Jeff Andrews has created pin boards related to architecture, design, film and television, typography, photography and many other topics. 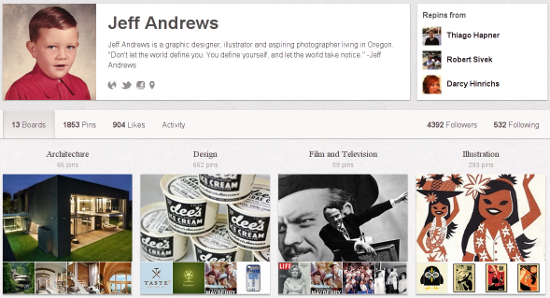 Mashable has over 40,000 followers on Pinterest. The pin boards cover varied topics, such as space, fashion, lifestyle, humor, business, advertisements, social media, and so on. For web designers and other internet enthusiasts, there are also special boards about Instagram photos and Pinterest itself. 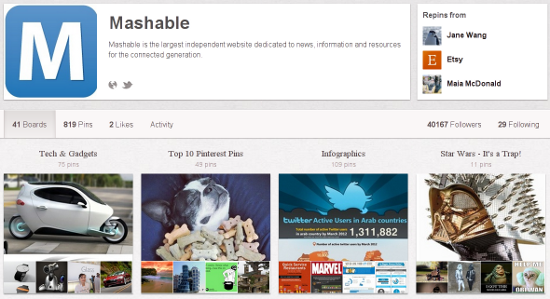 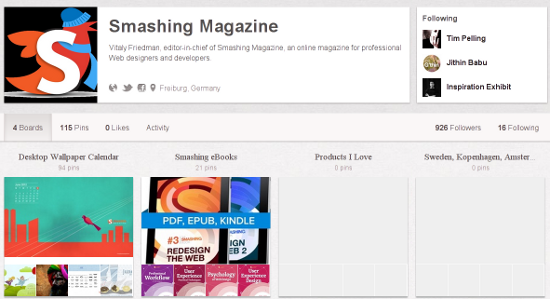 Finding design-related content on the internet is almost like building a personal library. No matter how many books you collect, there are always many more just waiting for you! Just like a good reading pane or library, the above list too can never be complete. Know any Pinterest boards that we missed? Feel free to share in the comments! (rb)
203
SHARES
ShareTweetLinkedin