How to Design Forms That Increase Your Conversion Rate A visually attractive form doesn't help much when only a few visitors fill it in. In reality, a neat design is limited in its effectiveness as it only works in combination with other factors that need to be considered as well. In this article, I will give you advice on how to shape forms regarding content to increase the conversion rate which, in this case, means the number of successfully completed forms.

How to Design Forms: Keep Them Short and Simple

Nobody wants to hand out a lot of personal information. Especially when one doesn't know the website owner well or even at all. Thus, it can make a lot of sense to ask your visitors for as less information as possible. According to a study by HubSpot, in which more than 40,000 landing pages had been examined, the completion rate of forms was the highest, when there were only three input fields in total. The conversion rate dropped by one third when a fourth field was added. On the other hand, you should also attempt to create a balance between the quality of leads and the number of fields. I can tell you from my personal experience that it's not always helpful to reduce the number of fields too radically. It is not always possible to distinguish high-grade from lower quality leads when the amount of fields is reduced to two or less. Is the Phone Number Really Important?

Especially asking for the phone number is a delicate subject. Most people don't want to be called. That's why you should ask yourself if it makes sense to request this information at a later time at least, or better, not at all. If you need to, once you receive the email address, you can still ask for the phone number in a follow-up message. Multistage Forms A new trend to make forms look short is multistage forms. Instead of filling all fields on the landing page of the form, there are only one or two questions asked in the first step. A magnificent example can be found on OnPage.org. Here, just one field is displayed on the landing page. It requests a URL of the web user. After having entered that the complete form with more fields appears.

Most websites show the obvious "send" on the buttons. However, variations of that can also lead to higher conversions. Alternatives that have great success are "continue", "send order" and "send now". In FormStack's report, some of these variants achieved 50 percent better results than "send". Count on A/B tests in this regard. Different websites can achieve different results here. We will return to A/B tests for forms later on.

Most people have a hard time sending a stranger or a website personal data. That's why you should avoid friction areas as good as possible and take measures to inspire trust. What could that look like? Here are some options:

Optimising Your Forms for Mobile View

The growth rate of mobile internet usage is enormous. A majority of internet users access websites from their smartphones or tablets. This also creates new challenges. Online forms are on the rise since they are easy to use, easy to share and make data storage easier. A couple of big players come to mind right away are JotForm and Google Forms. There are also other options that serve to different purposes, which one can find after a quick Google search. But it is a well-known issue that many people struggle with online forms when it comes to mobile view. The screens are smaller which makes it harder to fill out the longer forms so your form should be user-friendly on the small screen too. It is important to create forms which are adaptable to varying display sizes; desktops, laptops, tablets, and phones. One of the aforementioned big online form players; Google Forms, although having the power of Google at its back, is not responsive on mobile devices so filling out an online form on mobile devices is kind of challenging with Google Forms. That's why JotForm is the Best Google Forms Alternative with its mobile responsive nature, that is why many users prefer using JotForm over Google Forms. Overall, it is important to go with a mobile responsive online form solution in order to optimize your forms and be able to address a larger audience. Concerning mobile websites, there are many further options to support the user. For example, GPS could be used to determine the location of the visitor to automatically fill some of the fields in advance.

How to Design Forms: A/B Testing

What is A/B Testing? Nowadays, different variations of the same website can be shown at various web users easily. Doing so mainly allows you to see which variant does better. Here are some tips on how to A/B test forms. Placement: Above the Fold versus Below the Fold “Above the Fold” means the website area that is visible without any scrolling in the browser. “Below the Fold” is the area that only becomes visible after scrolling. In some cases, it makes sense to place the form above the fold. This should be done for easily understandable products and services. It's not necessarily more effective to place forms above the fold. When a form concerning complex services is put in the lower areas of the website, it can lead to a higher conversion rate as well. Michal Aagaard of ContentVerve, for example, experienced a tripled conversion rate when he placed the form in the lower parts of his website in one of his A/B tests: 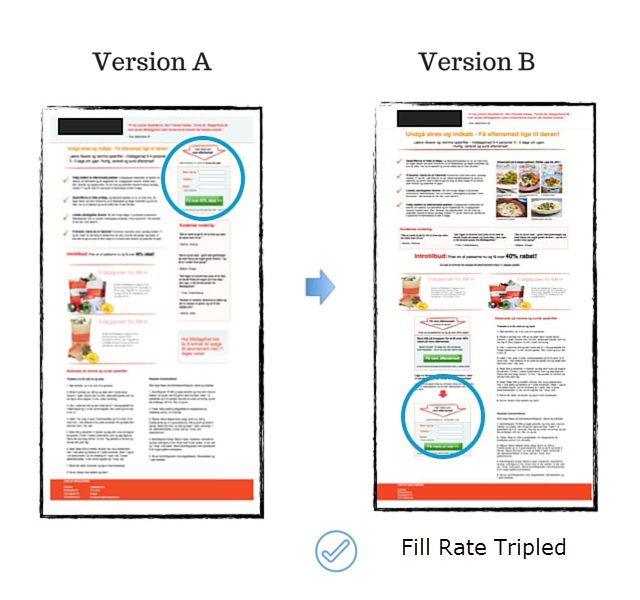 Promise Data Protection Effectively Who doesn't know these sentences below a form? "We don't spam", "We don't like spam", "Your data is treated confidentially" and many more. ContentVerve has also set up studies on this topic. The words "We guarantee 100% security. Your data will not be shared with third parties" lead to an increase in the sign-up rate of almost 20 percent. Secure forms are top priority for most of the people nowadays. Take away from that a more detailed information will help here and prefer that over short mentions such as "100% no spam" and similar. Test, Test, Test The same tests can lead to different results for different websites. That's why you should always check the mentioned best practices instead of just assuming that they will lead to higher conversion rates. More form areas that you can test:

Potential customers want to quickly receive information online and avoid dialogues with sellers. Forms can be both a hazard and a relief here. That's why it makes sense to thoroughly optimize them to achieve better results.

Home » How to Design Forms That Increase Your Conversion Rate