Visme.co: Swiss Knife for the Creation of Presentations, Infographics, Banner Ads and More (Comment to Win)

27
SHARES
ShareTweetLinkedin
Visme.co is a recently relaunched and re-branded service loyal Noupe readers already know. We've covered the service under its former name EWC Presenter in August of 2013 already. At that time, our conclusion was entirely positive. We recommended to put PowerPoint and Keynote aside, and use EWC Presenter instead. A lot has happened behind the curtain since then, so we thought it would be time to revisit a service we had enjoyed at first encounter. Are we still fans? Well, the name Visme.co is way better than the wooden EWC Presenter. And else? Read on... 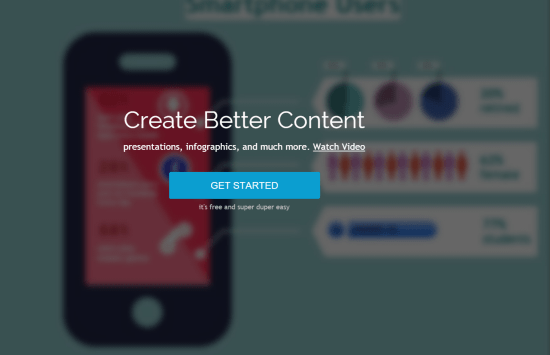 Visme.com: The Trend is - Visualize Me

The predecessor of Visme.co had the word presentation in its name; and for a reason. Visme.co entirely omits that term. Its motto is "Visualize Me" and as a visualizer in general it focuses not only on presentations but all kinds of visual content. While Presenter had major strengths in creating presentations, Visme.co is also capable of building infographics and banner ads. What made the people behind Presenter change its name? I assume the focus on presentations resulted in a more or less boring image of the service that was from scratch able to do more than just replace PowerPoint. Visual content is much more than a few slides. In fact, visual content is a vital part of any content strategy - or at least should be. But why guess? Let Payman Taei, the founder of Visme.co explain it:

The change from EWC Presenter to Visme was two-fold. Visme is transitioned beyond Presentations; it's in essence becoming the Swiss Knife of Visual content where users can also create infographics, animations, product demos and banner ads. Last but not least, we wanted a brand name that symbolized simplicity.

An image is worth a thousand words. Who doesn't know that phrase? And while this has always been true, it is becoming even truer (I know there is no such word) with the rise of content marketing efforts worldwide and the growth of the web in general. Already today we have more content than we could ever possibly consume in our lifetime and content production doesn't stop now. Thus, we need strategies to survive the information overflow and still raise our intake as the world around us is the one we need to cope with. The same is true for content creators. They are facing fierce competition. Who wins the attention of the reader, who gets lost in the mist? Chances are the less time your content takes to be consumed, the more likely it is to find its audience. See, I'm a rather big fan of Medium, who openly communicate the estimated time it takes to read any given article. Does this number rise above 3 minutes, I'm off. If the title sounds interesting I might save it to Pocket for later reading, but don't take me at my word that I'll actually do. Visual content, if well done, is much less time-critical, way easier to consume - a pure time-saver. And as such it is much more likely to be consumed in between two tedious tasks with tight deadlines. So, whether you are a consumer or a broadcaster of information, visual content should become a vital part of your survival strategy. And this is where Visme.co enters the stage.

Should you not have read our piece on EWC Presenter do that now. It will give you a much better insight into what was then and what is now. At first sight, not much has changed besides the name. Visme.co is all about presentations, infographics, banner ads or custom creations. Product demos have been (Coming Soon) then and still are today. Has nothing changed, then? 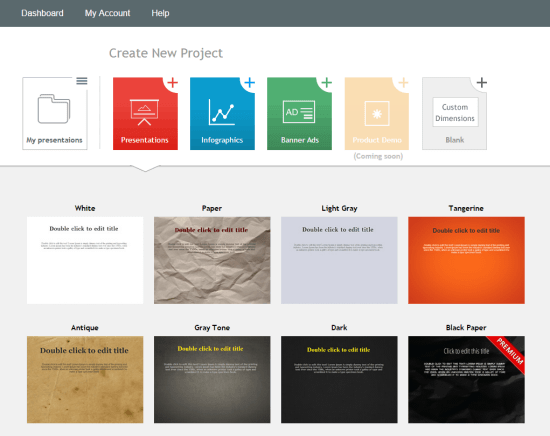 If nothing had changed, this wouldn't have been a bad thing as EWC Presenter was already impressive last time we reviewed it. But, indeed is Visme.co an evolution compared to EWC Presenter. Log into the tool and see that the website builder is now a tab in Visme.co and was a separate URL then. Take that as a side note, there are bigger changes ahead. First, EWC Presenter had a strong focus on presentations. Visme.co still has. Additionally, Visme.Co has now elaborate functionality when it comes to infographics and banner ads while Presenter was a little rudimentary in that regard. You'll agree that infographics and banner ads are a much more lucrative business to move into. 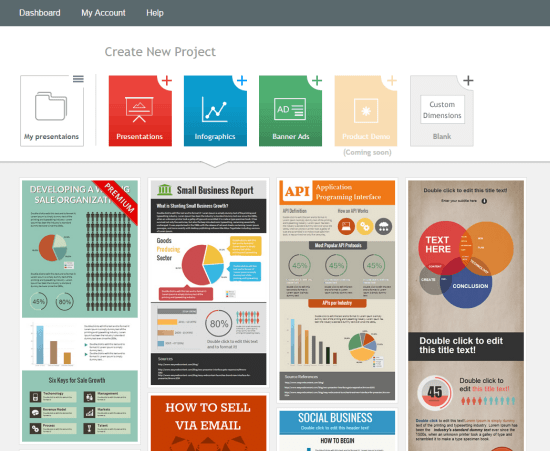 I said it before: an image is worth a thousand words. And while the infographics hype is already slowing down, visual content in itself is becoming more and more important. Banner ads are here to stay, too. No matter how bad the performance allegedly is. This always reminds me of the car business. Try to buy a car from a retailer. It will always be expensive with not a lot of possibilities for a decent rebate. Then try to sell your car back to the retailer. It will be practically worthless, accept it. Cognitive dissonance - anyway, takeaway is: keep doing banner ads. They will still be there tomorrow. 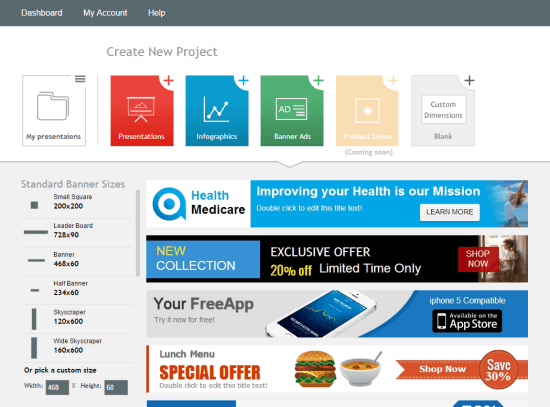 What else has changed? Animations were a separate feature then. In Visme.co you can animate each creation. No need to decide beforehand which gives you much more freedom to bring your ideas to life. Then let's talk about the user interface. It was good then, but it is better now. Sporting that flat look inspired by iOS7, it is way more intuitive and simply gets things done. If you are used to any drag and drop visual builder out there, Visme.co will not impose any problems on you. Choices have become fewer than before, but that's only as far as the interface is concerned. Visme.co gives you easier access to the same functionality, just with lesser clicks. In the early days, Presenter promised to be able to export the work to HTML5 soon. Visme.co today can do just that. 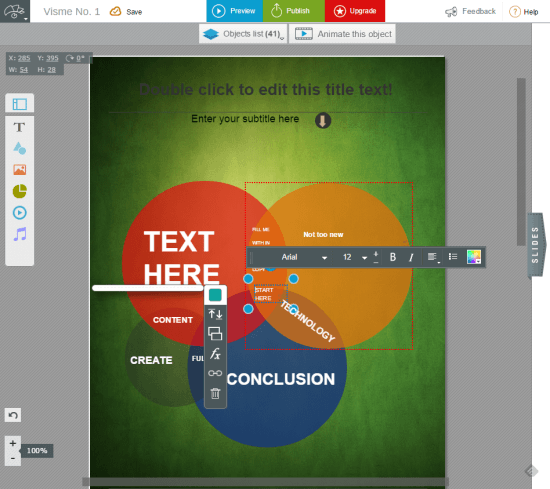 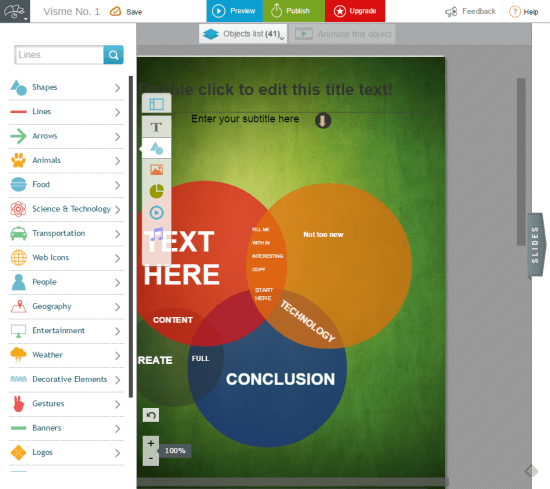 Visme.co: No Longer (Only) Free

Another change is the availability of paid plans. As promised Visme.co kept a free plan. This plan allows you to work on up to three projects. It prints a brand message on your projects, however. And while having only 100 MB storage space might not sound like the biggest problem, not being able to export other than JPG might. You are still able to simply publish your works to the web, however. But if you want PDF or - even better - HTML5 downloads you'll need to subscribe to one of the paid plans. There are two of that kind. Visme Standard will already allow you to export HTML5, create and maintain 15 projects and give you access to an otherwise limited widget portfolio for charts and infographics. The branding will be removed, too. With Visme Complete, you get the full package flat. Unlimited projects, no branding, HTML5 downloads, all widgets and collaboration features, even. Visme Standard sets you back 4.50 USD per month when billed annually, while Visme Complete calls for 14.25 USD a month while charged yearly. The month to month subscription is about double the price. In the times of the internet and its price models, this is not to be called cheap. Yet, if you actually build with these tools, the money you make out of that will easily be a multiple of what you pay for the tool. Thus, you shouldn't judge the price in itself, but your perspective to earn money using it. My toolbox would be much smaller, would I judge by the price and not the value. Anyway, check the service and judge for yourself. Whether it gets you depends largely on what you do for a living ;-) If you are part of the target group, you'll hardly find a better tool.

Comment to Win: Secure Your Chance to Win One Year of Visme Complete

Visme.co gave me a Visme Complete plan for a year to give away. To keep things straight and simple, we'll go for Comment to Win. Leave a comment below this article, telling us why you have to be the winner. We'll draw one at random in a week's time. The game starts immediately and ends on 5th of November 2014, 6:00 pm CET. There are no restrictions. Participate from wherever you are located on this globe. Make sure to leave a valid email address, so that we can reach you in case you win. Your email address will not be used for any other purpose. So keep calm and comment on. Good luck!
27
SHARES
ShareTweetLinkedin