What is Change Blindness in UX Design 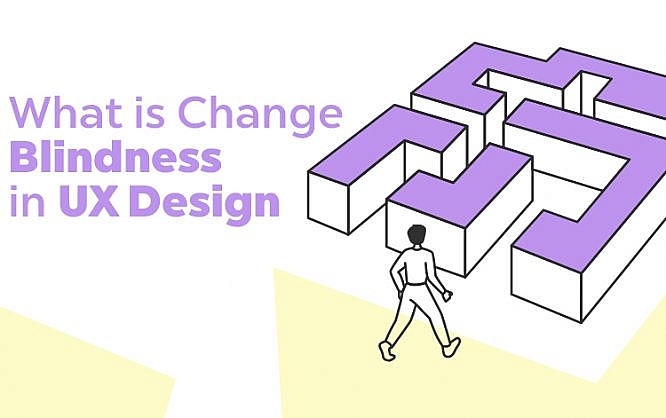 When researchers carry out usability testing, they have often observed that users overlook a change on the screen otherwise considered obvious and highly noticeable by the designers.

A designer working for an iOS or android application development company, for example, knows what to look for pertaining to the change, where to look for the change, when it will appear on the screen, and what it means for the application. So, it is obvious to a designer that they wouldn’t miss the appearance of an important message or data object when reviewing their own design.

However, users often do. This is because of change blindness or UX blindness. You can call this a  million-year-old fact of human perception and unfortunately, this is not likely to go away any time soon.

So what is change blindness? Let’s try to define this with an example we all can understand.

In thriller and horror movies, sometimes when the antagonist is about to enter a potentially threatening situation we see that the background scenery changes with context to the situation, the music gets intense. But chances are that most viewers won’t even notice those changes.

Movies more often than not have small inconsistencies like this from one scene to the next. They can be the changes in the background, in the actors’ clothing, makeup, or positions. However, they get ignored when they are made during cuts between the scenes.

This is what is called change blindness. And this phenomenon goes beyond movies, applying to how people perceive scenes in general, whether projected on a screen or in real life. And this change is very dynamic and robust in nature, even when people are warned that a change may happen, changes in a scene can go undetected.

Change blindness is the tendency of people to ignore changes in a scene when they occur in a region that is far away from their focus of attention or occur out of their conscious attention span.

Psychologists have carried out a series of experiments in the mid-1990s. Throughout those experiments, participants were shown a picture of a complex scene for about half a second; then the display went blank for a fraction of a second, and finally, the same picture was shown again.

During the second time the scene was shown, a few of the details were modified.  Like an object was changed size, the color was modified, or an element was added or removed. Those involved in the experiment were supposed to identify the changes in the two images.  It took at least 20 or 40 alternations and cycling between the pictures for people to be able to find the said differences.

The flickering quality of the display is the cause of this change. When users are viewing websites on a computer the flicker is caused by the loading of a new page or a UI element once the user has pressed a button. Sometimes even a small blink of an eye is responsible for causing this change blindness in users.

Why Does Change Blindness Happen?

The limitation of human attention capacities is the fundamental reason behind this aspect. Any complex scene occurring in front of our eyes has a multitude of details. Undoubtedly, it is hard and inefficient for people to attend to all of them. What we normally do is take shortcuts because our brain is hardwired to focus on the most important details in our surroundings, ignoring the rest.

Change conveys important information about our environment. Most changes that occur in nature are mediated by movement, and movement is easily detected by human peripheral vision. After detecting the movement in the periphery, humans look for the source of movement. This behaviour is a remnant of our life in the wild, where any move could signal a predator waiting to hunt us.

The cause of change blindness is when the movement as a cue for change is weak or completely absent. Normally, when a screen flickers, the movement is shunted out;  two static versions of the scene happen in front of users. The only way users can find this out is by inspecting all the corresponding elements in the before and after versions and comparing them.

This task is very difficult, the task of identifying change for users is not easy. It not only is tedious to inspect the plethora of small details in the scene, but the memory of the prior version of the scene is likely to be quite poor too for users. There is a high chance that we paid no attention to many of the elements of that scene anyhow.

Home » What is Change Blindness in UX Design