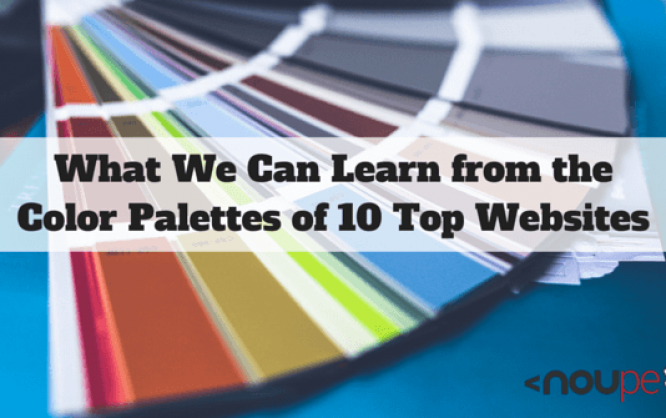 Guest Article by Tim Brown - Web designer and SEO Specialist for Hook Agency – Minneapolis Web Design. When you take a close look at the ten most popular website color schemes in the U.S., you'll notice some patterns- some ways of dealing with color and white space that can inform your design sensibility. These companies wield an inordinate amount of capital, nd can pay marketing professionals designers and market researchers to A/B Test, design, and optimize their sites at this point in their company life-cycles. There is also something to be said about their ability to get the success, and the role design has played in that. 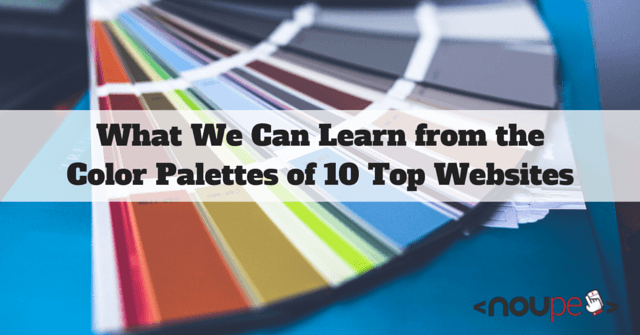 Imagine a world where Google was dark purple and had a big yellow "I'm feeling lucky" button at the onset, perhaps we'd have an entirely different internet today. Perhaps Alta Vista would've turned into the meeting hub of the web and would’ve pulled the ridiculous amounts of money from ads that Google does. Here’s the internet giant's color palette as it stands today with HEX and RGB Values:

Here are the top 10 U.S Websites right now, and the colors they use.

1. Google's color scheme and several other top brands go colorful, are unafraid of coming across as friendly and light-hearted.

2. Amazon's color scheme keeps it formal with it's blue and has a lot of freedom to demonstrate excitement on call-to-action buttons with its version of a deep yellow.

3. Yahoo's color scheme is bold and straightforward and their website is still incredibly popular though it's primary color, a rich purple, is statistically preferred mostly only by women.

4. Facebook's color scheme utilizing blue is one of the most basic but yet intelligent choices as it is hard to imagine a world where it's user interface color was orange. This color lends itself to a tendency to relaxed surfing where you lose track of time, likely you’ve heard, blue is said to elicit trust and make people feel calm.

5. Youtube's color scheme utilizes an excitement-inducing red, which plays to Youtube’s benefit potentially keeping people revved up to watch their next video, as red is associated with excitement.

6. Ebay's color scheme goes the route of the almost Google-esque bright colors, perhaps yanked right from Google in the early days. Microsoft has a four-color scheme like this as well, and it makes you wonder; what is the significance of these colors – we'll get into this more below.

7. Wikipedia's color scheme goes simple with a lot of whitespace and sparingly uses this light blue for backgrounds - and a more common blue for links.

8. Twitter's color scheme creates the same type of impression, albeit a little brighter than Facebook. However, Twitter has given individuals the ability to control the colors a visitor sees when visiting their profile, allowing a custom look. Mind you, it hasn't gone to the extremes MySpace did when it let everyone put up spinning gifs all over their profile, which turned MySpace into a steaming pile of internet history.

9. Reddit's color scheme includes the laid back ubiquitous blue of these other top brands but drops in a splash of in-your-face red.

10. Live.com - Microsoft's  color scheme once again brings up these four colors, not that much different from Google and Ebay. Did these guys all have the same branding agency, or are they on to something?

If you think the three similar color schemes in the top 10 websites are a coincidence - think again.

From CBC's “Under The Influence" the four colors used in Google, Ebay, and Microsoft's color palettes imply the following meanings. According to Terry; "Color is a silent salesperson," and marketers for years have paid attention to the in's and out's of what they want the audience to feel when they look at their ads – it's no different with websites. Smart marketers will determine the key action, benefit and feeling they want to drive and what it means to the audience and build their website with those colors prominently featured. A couple of examples of color in action:

Don't be afraid to follow convention with your color scheme, if you want the most conversions on your website.

57% of men and 37% percent of women prefer blue over any other color. That's far and away the most appreciated color, the next top color being green with 14% of both, with purple having 23% of women's votes and very few men. Instead of getting wrapped up in people's tastes, though, think about it this way. What will get the most people trusting the site and taking action? Use that. Don't get wrapped up in testing 41 shades of blue like Google did, but do pay attention to how people perceive color more generally and use that to your advantage. Nothing says outlier like a zany color palette; it just matters whether you want to take that route and try and set yourself apart or whether you believe you can follow some conventions and allow people to think about your content instead of your design. You want to delight the visitor to the site, but you don't need to impress them or draw attention to the design, that's only the wrapping for most websites, not the main attraction. The main attraction for most business websites should be the photos, the information about them, the content, and the story of the company and the value they provide. This is why it's important to use white space to create emphasis on the elements that remain, and not to fill every inch of the site with unnecessary or redundant promotion. Color is an incredible tool, but using tried and true patterns in color will help bring a sense of familiarity, and when it comes to commerce - familiarity trumps novelty every time.   (dpe)
75
SHARES
ShareTweetLinkedin

Tim Brown is a Minneapolis web designer focused on conversion rate optimization, persuasion through web design, and making beautiful and effective design, as well as creating resources for the web design and digital marketing community.