jQuery can empower a developer with the tools required to create a rich user experience. The way in which we display images, text, charts and graphs can enhance functionality for the wide range of users. Let's take a look at 35 powerful and effective jQuery plugins and techniques for slideshows, graphs and text effects. 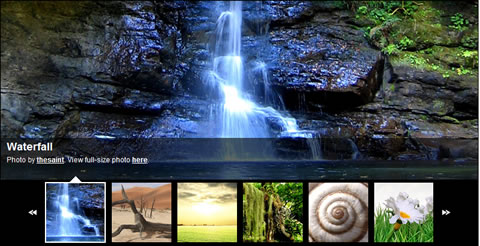 Jquery Plugin MopSlider 2.4
MopSlider is the slider box can contain any item that is set height and width. From 2.2, MopSlider can be put 2 in the page. A CSS file isn't necessary. 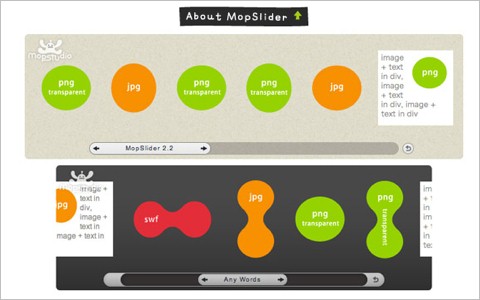 jQuery Image Scroller
Making use of jQuery's excellent animation features, this image scroller will be completely autonomous and will begin scrolling once the page loads. The finished widget will be completely cross-browser compatible and perform as expected in the latest versions of all of the most common browsers. The tutorial helps build in some interaction by adding controls that allow the visitor to change the direction of the animation.

Sliding Boxes and Captions with jQuery
All of these sliding box animations work on the same basic idea. There is a div tag (.boxgrid in my CSS) that essentially acts as a window where two other items of your choosing “peek” through. From this basic idea we can play around with animations of the sliding element to either show or cover up the viewing area, thus creating the sliding effect.

jCarousel Lite
jCarousel Lite is a jQuery plugin that carries you on a carousel ride filled with images and HTML content. Put simply, you can navigate images and/or HTML in a carousel-style widget. It is super light weight, at about 2 KB in size, yet very flexible and customizable to fit most of our needs. 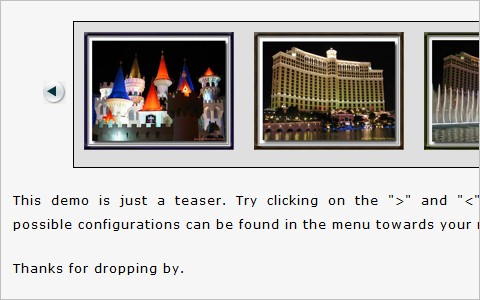 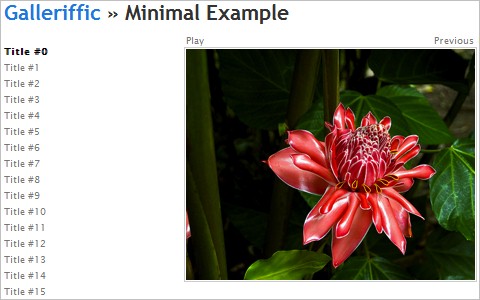 jQuery plugin: Wilq32.RotateImage
This is the final product of a Wilq32.PhotoEffect Snippet. You can use this simple and tiny script to get an effect of rotated images directly from client side, such as user generated content, and then animate them using functions. 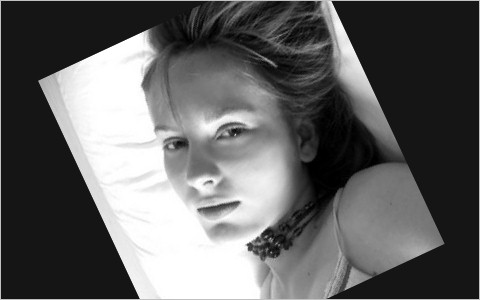 jQZoom Evolution
JQZoom is a javascript image magnifier built at the top of the popular jQuery javascript framework.jQzoom is a great and a really easy to use script to magnify what you want. 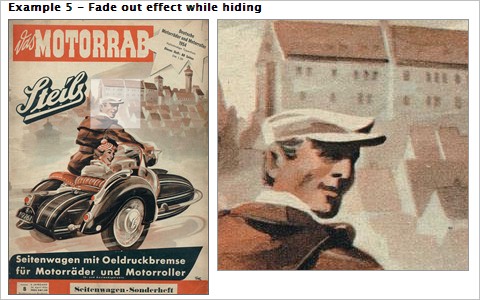 Resizable Image Grid with jQuery
Image grids that smoothly scale at the simple drag of a slider are no longer confined to desktop apps like iPhoto or Picasa. Thanks to some clever CSS and the jQuery UI, fluid image grids are now surprisingly simple to implement on the web.

jQuery plugin: Tooltip
This jQuery plugin tooltip can help you use bodyHandler to display footnotes, an image with a tooltip, or block tooltip. Also is helps links to have no delay with tracking and fading, or with extra content with extra classes. It's useful for different tooltip styles on a single page like an image map with tooltips and testing repositioning at viewport borders.

Charts and Graphs with jQuery

jqPlot Charts and Graphs for jQuery
jqPlot is a plotting and charting plugin for the jQuery Javascript framework. It's strongest feature is its pluggability. Computation and drawing of lines, axes, shadows even the grid itself is handled by pluggable "renderers". The plot elements are customizable. The core jqPlot code allows custom event handlers, new plot types, and more. 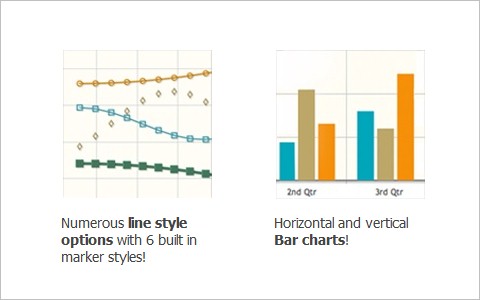 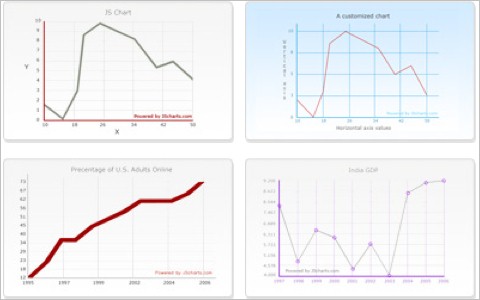 moBlur.org - Google Charts GUI with jQuery
This jQuery is a basic frontend GUI to be used with Google's charts API. 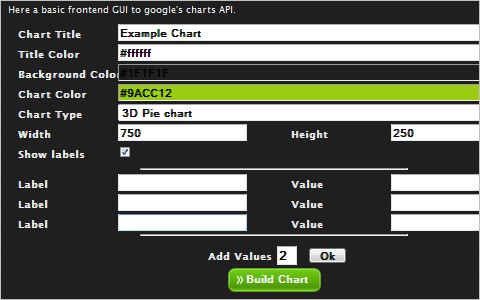 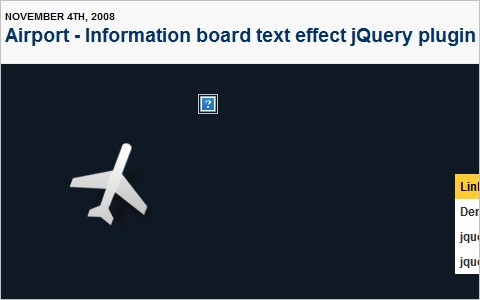 Editable (jQuery Editable Plugin)
This is a real customizable jQuery editable plugin. Currently it can convert any tag (span, div, p and ...) to text input, password, textarea, or drop-down list. You can easily extend it by adding your own input type using its editableFactory object.

jQuery Plugins
Some of these plugins have been merged into jQuery core in one form or another. These include the ability to batch results into an array, a resolution for IE z-index issues, auto-expand text areas, dynamically create configurable gradient to the background without using images, implement the over label technique, live query and many more helpful plugins. 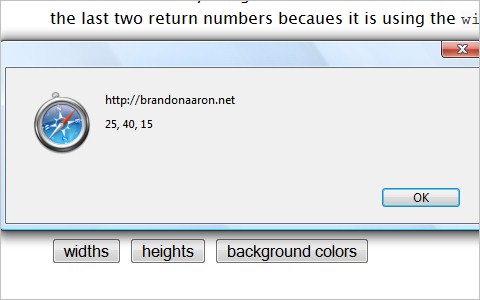 Jquery Elastic 1.2 Demo
This page contains a couple of demos of the Jquery plugin Elastic. Elastic makes your textarea change its height dynamically.

Stephane Caron - No Margin For Errors ¬ Pretty comments
Here's a small jQuery plugin that allow textareas to stretch as content is put in. If the content goes over the defined height of the textarea, the textarea will grow as needed.

ToggleVal
ToggleVal gives you the option to populate the default text of form fields in a few different ways. It will then toggle the default value when the field receives and loses keyboard focus.

jQuery sIFR Plugin
The jQuery sIFR plugin is an addon for jQuery that makes it easy to replace text in a web page with flash text (sIFR) using the internal jQuery API.

jQuery Spoilers Plugin
Spoilers is a jQuery plugin which implements a feature first seen on the imdb.com web site. The pages using this plugin to show "Spoilers!" text, but when you mouse over that text, "Spoilers" disappear and the underlying text is revealed. The intention is to keep the casual reader from inadvertently reading details which he might not want to know. By mousing over them, he can reveal the details.

jTruncate - Text Truncation for jQuery
jTruncate allows you to customize nearly every aspect of the truncation operation. It provides simple yet customizable truncation for text entities in your web page.

List of Useful jQuery Plugins: jQuery, JavaScript
This is a huge masterlist from the jQuery plugins in the jQuery plugins repository. These are some of the best and most practical. The truly exceptional plugins are marked with "EXCELLENT."

Lazy - The on-demand jQuery plugin loader
This jQuery plugin is an on-demand plugin loader, also known as a lazy loader. Instead of downloading all jQuery-plugins, that you might or might not need, Lazy downloads the plugins when you actually use them. The major difference between Lazy and it's competitors is it's size. 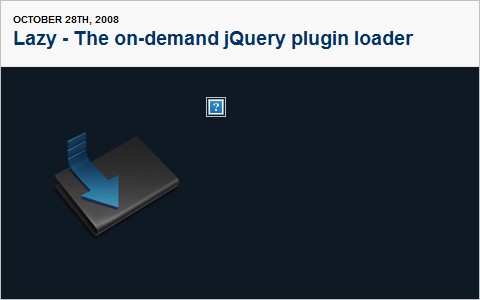 Guapo - jQuery copy plugin
We all know that in IE we can easily copy text to clipboard. It is, however, not such an easy in FX. This plugin uses a SWF file to achieve this; the SWF file's default location is the same to the plugin. If you move it to another location, it changes in the plugin source code.

Moousture
Moosture is a mouse gesture library written solely in javascript with power and flexibility. Implemented on Mootools following the Object Oriented standards, the library is aimed to set out a future framework for mouse guesters for any browser including modern mobile devices.

Gritter for jQuery (Growl) (Demo)
A jQuery Growl look-a-like plugin, a notification bubble/popup that appears in the top right of your layout. Think of it as calling the alert() function in JavaScript, only it’s subtle and looks nice. 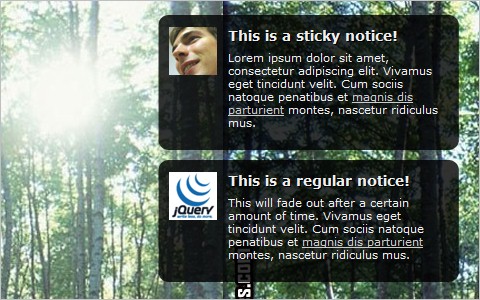 jGrowl - Unobtrusive Notification System for jQuery
jGrowl is a jQuery plugin that raises unobtrusive messages within the browser, similar to the way that OS X's Growl Framework works. It has the ability to create multiple container instances, allowing a developer to raise and create various notifications in various location on the user's screen. 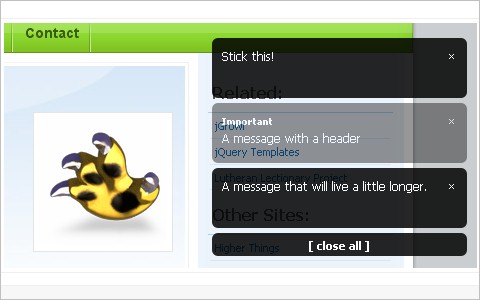 Add a favicon near external links with jQuery
External links should always be marked distinctly in order to see them easily. An even better idea is using the favicon.ico of the external site, if it is available of course.

UI.Layout Plug-in
This plug-in was inspired by the extJS border-layout, and recreates that functionality as a jQuery plug-in. The UI.Layout plug-in can create any UI look you want - from simple headers or sidebars, to a complex application with toolbars, menus, help-panels, status bars, sub-forms, etc. 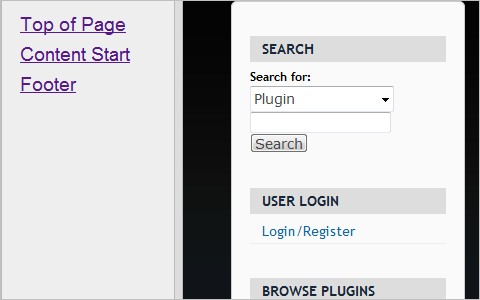