How will iOS App Development Change in the Near Future?? 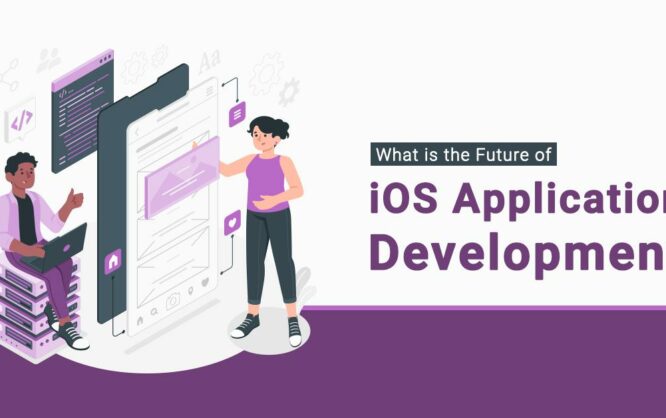 The fact that one day in the near future, Smartphone Users will surpass a subscription number of several hundred million. With China, India, and the United States being the top-most countries with the highest smartphone users, the worldwide smartphone subscription has surpassed 6,500 billion. With 3.74 million non-gaming Apps and over 1 million gaming Apps, the iOS App Store has become the second-largest App Store after Google Play Store. Well, who can now question the popularity of iOS App Development?

Apple.Inc has left no business success story coupled with App Development. From Facebook Messenger, Kik, to ASL App, and Chegg eReader, these are a few successful iOS Apps.

So, if you're an aspiring entrepreneur looking to turn around your Business with an iOS App, let us familiarise you with iOS app development trends, and also what the future beholds.

The future of iOS App Development

Apple.Inc brings you limitless possibilities to develop and launch your Apps. The Platform offers iOS, iPadOS, macOS, tvOS, and even watchOS to provide a unique user experience. Now, these cutting-edge technologies together bring unique capabilities to help you develop a seamless and intuitive experience.

Let's dig further into the most advanced facets of iOS and how it can help you build Futuristic Apps.

iOS App Development is incomplete without a user's data protection facility. Now, iOS provides this protection by encrypting the files of the app on the disk. This Data Protection feature forbids any unauthorized access to the App files.

There are four levels of Data Protection, namely,

If no protection level is specified, iOS Applies the default one automatically.

Grow your iOS App with CloudKit

From efficient syncing to simple monitoring and management, CloudKit is the easiest way to build and grow your App. iCloud keeps everything updated across different devices and the web. And as and when your user base grows, you get 1 PB (petabyte) of storage for the Public Data of your App.

CloudKit offers a comprehensive set of features to help you build powerful Cloud Apps including;

Organize your Apps in containers so that their data doesn't tangle up with others!

Core NFC is an essential aspect of iOS App Development. The app can read the physical environment and real-world object tags to provide users with more information about them. The app can read NFC tags of types 1 through 5 available in the NFC Data Exchange Format (NDEF).

Core NFC is available on devices that support Near Field Communication.

Siri is an intelligent assistant that users can do things with just their voice. Siri handles user interactions, including voice recognition, language recognition, and other user requests.

Try commanding the following to Siri to see what this advanced feature can do for a matchless user experience with your iOS App.

Add 1 Almond Milk, Wheat bread, and Eggs to my grocery list in MyListApp."

Suggested Shortcut APIs paired with Siri bring convenient shortcuts right to the user's Lock Screen! The conversational feature lets Shortcuts get more things done. Say, if the users say "Order Takeout," Siri would ask a follow-up question like "Which Order should I takeout," and then present the order from a Food Ordering App!

Siri will also display visual information for ease of use!

In recent versions, Apple has made significant progress with Augmented Reality. ARKit 5 allows one to create AR Experiences for specific places and even in the neighborhood.

The new, improved features of ARKit 5 include Motion Tracking and Face tracking. Face Tracking extends support to the Front-Facing Camera for any iPhone Model with an A12 Bionic chip and later. With the TrueDepth Camera, one can track up to three faces simultaneously, such as in iOS apps like Memoji and Snapchat.

iBeacon is beneficial for iOS App Development for industries like Retail, Hospital, Education, Entertainment, Real Estate, and Digital Advertising. This feature can help your business to:

A few Machine Learning features include object detection with images and video, analysis of language, and sound classification with just a few code lines!

The IoT industry is growing exponentially, making people's life easier. One can build an IoT App on iOS in just a few easy steps! Suppose you're building a native, hybrid, or cross-platform app. In that case, the first few steps include working with Xcode and Swift, choosing an Application Enabled Platform, coding the front-end and back-end, using the IoT Framework, and finally launching it on the Apple App Store!

It's crucial to keep up with the trend so that you don't go obsolete! So, while you're working on your iOS App, try to include the market-trending features into your App Development. Thus, this shift to developing iOS Apps is taking App Development to the next step. Avail the best iOS App Development Services by contacting the right company or developer at the right time.

So, hire an iOS developer by checking that the chosen App Development Service Provider has relevant experience designing and developing the app! Artistic minds never hurt anyone. Also, look out for developers who hold the caliber of thinking out of the box and developing robust, effective, and customized iOS Mobile Applications. Most importantly, make sure that the developers put forth a cost-effective quote for their user-friendly iPhone App.

Technical soundness is yet another App success catalyst. Whereas, in the end, quick delivery of high-quality products is reasoned to bring the greatest outturns!

Employ these futuristic and groundbreaking features and build a next-gen App today!

Home » How will iOS App Development Change in the Near Future??