ImpressPages CMS: Drag and Drop All the Way!

11
SHARES
ShareTweetLinkedin
Last week, we covered ProcessWire as part of our regular CMS feature here on Noupe. Today, in this article, the CMS under consideration shall be ImpressPages. ImpressPages is an open source Content Management System with a drag and drop interface, designed with the end user in mind. We will be discussing its mode of operation, followed by additional details such as community, documentation and pros and cons. Also, just in case you missed any of the previous instalments or reviews of CMSs, read them here. 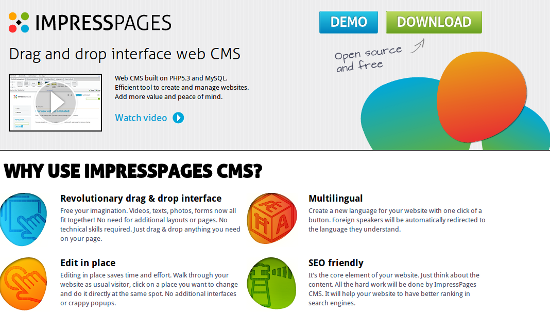 ImpressPages CMS: Drag and Drop All the Way!

Unlike most other CMSs that we have discussed in the past, ImpressPages is outright different in the sense that its USP lies in its drag and drop model. As far as the back-end goes, you really do not need much technical expertise in using ImpressPages. Point, click, drag, drop, create! As far as the installation goes, the process is rather simple. Ensure that your server meets the minimum requirements (which vary from version to version, and the updated list can be found in the documentation), and upload the CMS files. There is an installation wizard which makes the process really simple. http://www.youtube.com/watch?v=V5FaoyeL6LE The update process too follows the similar trend as the installation procedure, albeit with some changes. The basic strategem for updating ImpressPages is as follows: Of course, sometimes there might be version-specific details that you need to bear in mind as well. In terms of usage and interface, ImpressPages surely does not disappoint. In fact, if I were to add, a brief look at the CMS back-end surely reminds one of Microsoft Office. The interface is outright simple and very well designed: you have separate tabs for general settings, sitewide settings, and so on. Each tab itself is sub-divided into sub-tabs, such as SEO, content management, configuration, and so on. http://vimeo.com/19366427 Since ImpressPages uses a drag and drop model, there is not much you can talk about or criticize here. Almost everything is edited in place: view your website as admin, and click on the part  that you wish to modify, and get going! The catch with such interfaces is that you will either love it, or hate it. Not everyone is a fan of drag and drop or the edit in place model of website management, but for those who are keen on it and are used to it, it really makes life easier. At the end of the day, it must be noted that ImpressPages has implemented the drag and drop approach really well. In terms of extensions, if you know your way with HTML and CSS, you can modify and tweak themes for ImpressPages. I generally believe that drag and drop CMSs are sometimes ideal options for handing out to your clients, and ImpressPages surely projects itself as a decent choice. Among other things, ImpressPages has features such as automatic generation of sitemaps, support for newsletters, anti-spam tools, multilingual support, and so on.

ImpressPages has a decent documentation to its credit. There are videos and guides for the most basic steps and known issues, followed by a separate developers’ section wherein you have info about API and development, cron jobs, etc. The plugins and themes repository is rather less populated, but with the WordPress monopoly ever on the rise, it has become a norm anyway for all other CMSs to have thinner repositories. Plus, coding a theme for ImpressPages is not really difficult. If you have some expertise with development and design, you will not miss the repository much anyway. http://www.youtube.com/watch?v=I7ZTOX3l7Kc On the downside, though, the community is just too mute. I am lost as to what can be the cause for this: CMSs such as Habari have shown that even if your community is small, it does not really have to be dormant and the forums can indeed be an active place for discussion, even with negligible members. ImpressPages, sadly, does not seem to have a really enthusiastic user base. Take a look at the forums, for instance. Almost all the threads that I viewed or browsed had either no replies, or just one reply each. At the very best, there were two or three replies in few threads. That is it. For someone looking to get started with ImpressPages, this can be a huge deterrent.

The Good and The Bad

Before going any further, let us sum up the pros and cons of ImpressPages.

ImpressPages is a rather young and lesser known CMS. It seems to be trying to pitch itself not as a swiss army knife, but as a CMS that allows you to focus on tasks that matter. In fact, the manifesto of ImpressPages CMS also talks about the need to bridge the gap between the developer and the user. Web admins are often not IT professionals, and thus, ImpressPages has tried to strike a flexible balance between the needs of the two. That said, if you are looking for a CMS that offers drag and drop support, and you do not have the habit of heading to the forums when seeking support, you should definitely check out ImpressPages CMS. Have you tried ImpressPages CMS? If so, feel free to share your thoughts with us in the comments below!
11
SHARES
ShareTweetLinkedin

Home » ImpressPages CMS: Drag and Drop All the Way!