Kiandra IT is one of the bigger companies in the field of software development and the likes in Australia. In 2012 they were declared Microsoft Partner Of The Year. Pushing ahead their own software development efforts Kiandra created a theme for jQuery UI which they used internally for almost a year. Then they decided to open source it under the name of Delta. Kiandra did and put it under the liberal MIT/GPL-license, so everybody can use Delta free of charge for any purpose, be it for private, educational or commercial use.

Delta - Modern Interface-Elements Recognize Which OS They Are Running On

What have we got here? We have a big, well-known company with a reputation to lose. We have the fact that this very company uses the theme in their own projects for almost a year, thus improving it on the go. Does this imply some trust? To me, it does. And this trust has not been deceived during my little test of the project. Although I have to admit that Delta is not the biggest or most feature-rich theme the market has to offer. It does only a few things, but does them well. 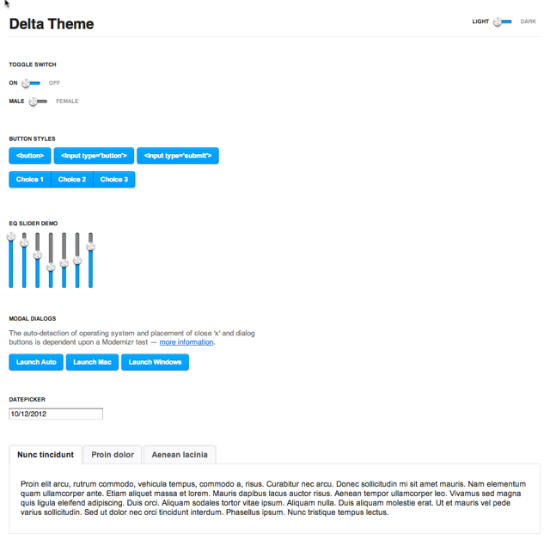 Delta in its light variant[/caption]

Delta defines several toggles and sliders and provides a variety of buttons and modal dialog popups. You will get a decent datepicker and a content-container with tab-based navigation. The theme can be displayed in a light variant with a bright background or in a dark style with a - well - dark background. You could leave it to your visitors to switch between the two but need not. 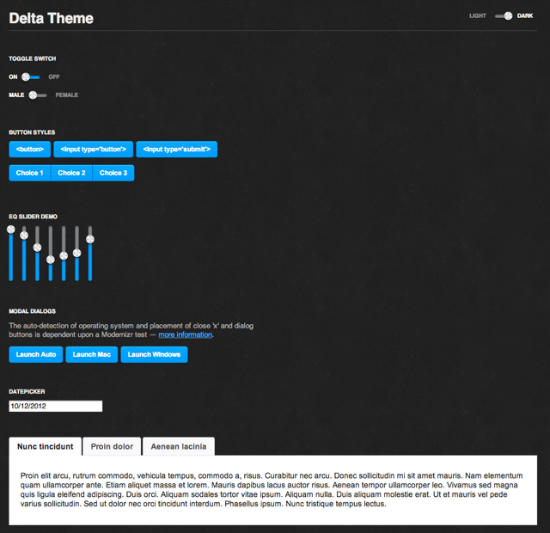 Delta with a dark background[/caption]

All elements come in a contemporary modern design that will fit most apps, especially but not only in smartphone web apps. The modal dialog-popups are enabled to recognize the OS they are running on, making use of a small Modernizr-test beforehand. That way they determine where to position the close-button and the display sequence of the other standard buttons. In my little test the functionality worked flawlessly.

Delta is available on GitHub, where you will also find a demo of the theme.