How to Block AdBlockers With Adi.JS 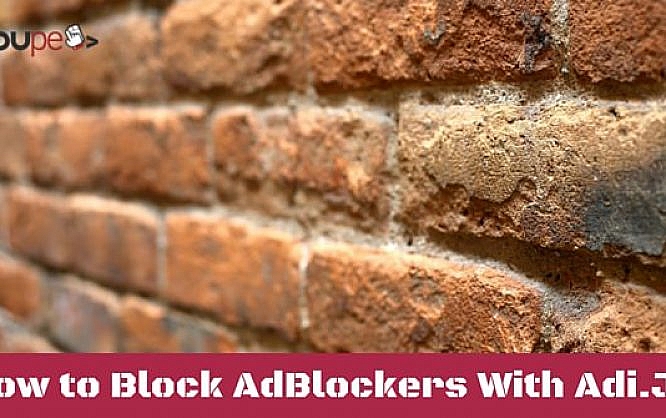 In the past years, many attempts to establish fee-based web offers have failed. Mainly concerning information offers from the big news portals, but also here at Noupe, which is small in comparison, it is naturally expected that all of this information is available for free. It is obvious that these offers need to be financed by advertisement. However, due to ad blockers, anyone can just remove ads comfortably. By now, this affects not only the website owner but also the website visitor. 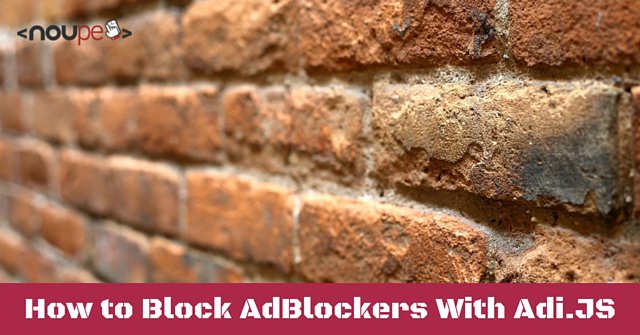 The Bad Reputation of Online Advertisement

Advertising has gained a bad reputation over the last decades. In newspapers and magazines, it is less annoying in most cases. On television and in the mail, it is generally viewed negatively. The reason online ads have a particularly bad reputation is rooted in their beginning in the 90s, which has also damned the concept of popup windows.

Quickly, adblockers have established themselves as a browser plugin that blocks popups. For many users, the use of adblockers has become natural. The blockers’ popularity caused many companies to lose enormous amounts of advertising revenues and mainly the hosts of news websites were forced to react. According to the website hosts, approximately 25 percent of all visitors use ad blockers. 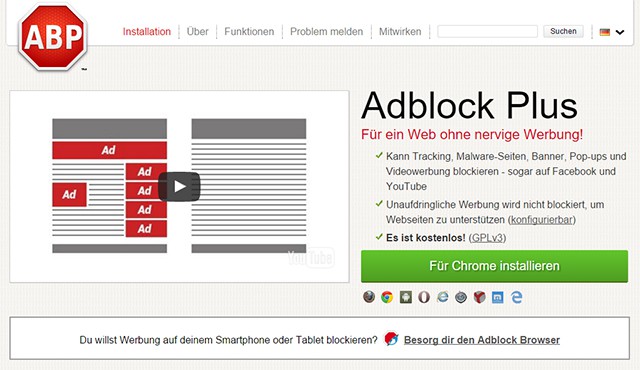 In 2013, well-known German but internationally acclaimed news portals such as Spiegel, Zeit and Süddeutsche had called on the users to deactivate their adblockers at least while viewing the named websites. The appeal itself, which was held up for several weeks, seems to have worked. According to the hosts, the advertising revenues had grown, at least in the short term.

However, the campaign against ad blockers has caused a lot of criticism as well, as online advertising can be intrusive at times and also poses a potential security risk. Infected ad servers, as well as the use of Flash, were named among those risks. Today, Flash as the standard for online ads has been replaced by HTML5.

No Bild (German for Image, but Also the Name of the Publication) for AdBlock Users

In 2015, the Germany-based Springer-Verlag has taken the campaign of 2013 a significant step further for their popular news portal Bild.de. Here, users of adblockers are banned from the content entirely. The website recognizes the use of an ad blocker and displays a message telling you to turn off your adblocker for your stay on this site.

Supposedly, other providers, such as Spiegel Online, also consider using methods similar to Bild.de to prevent the use of ad blockers on their website.

When running an ad-financed website, you can integrate your own Adblock blocker using the small plugin Adi.js. Just place the jQuery-based plugin in your HTML document together with the file “advertisement.js” and access it.

As soon as an adblocker is recognized, a window saying that an adblocker was found will pop up. You can customize text and appearance of the window via several settings.

The file “advertisment.js” is not called when the adblocker is activated. Thus, you can place a JavaScript in there which will only be executed when adblockers are not active.

Of course, Adi.js is no adequate replacement for the method used by Bild.de, as Adi.js relies on JavaScript, which can be deactivated by any user with a little bit of knowledge quickly.

The Right Way of Handling Ads and Adblockers

The bad image of ads is why the campaign of Spiegel, Zeit and Süddeutsche as well as the radical solution of Bild.de have been confronted by a lot of criticism. Everyone knows about the significance of ads for the website host. But it’s also understandable that ads are often considered very obtrusive.

Advertisements that are layed over the content you are currently reading are not the most user-friendly way of financing a news website. The recent ad videos that take up the entire browser window once the site is loaded and need to be minimised manually even stick out further here.

Instead of going for radical solutions, the goal should be to use ads in a way that they will still be seen (as that is the point of ads) but won’t affect the reader.

Using videos and animations is acceptable. However, as soon as the visitors need to remove ads before being able to access the website’s content, it will become difficult to convince the user of forgoing adblockers. Methods that rely on force, like the Bild.de method, are never the right solution.

Using Adi.js should be seen as a friendly request. This is also acceptable, as the adblocker, once activated, doesn’t differentiate between annoying, self-extending videos and the “standard” website banners as seen on our good old Noupe Magazine. Ad blockers will also damage those that stay away from annoying ads.

You are here: Home / Development / JavaScript & jQuery / How to Block AdBlockers With Adi.JS