Better browser support has CSS experiments become more popular these days. My personal favorite up until today was Paperfold CSS. Of course we also saw Meny and some other more playful approaches. Makisu is a brand-new concept for dropdown navigation menus realized by the use of CSS 3D transforms. I have seldom seen such an impressing result. Sorry Paperfold CSS, I leave you for Makisu...

Justin Windle aka soulwire, born in the UK, but now living in the United States, developed Makisu, a concept resembling the older Paperfold CSS, but going much farther than that. It is actually easily implementable in live websites through its iteration as a jQuery plugin. The strange name stems from the Japanese language, where a Makisu is a bamboo mat used to produce a certain kind of sushi or just to squeeze moisture out of fruits and other overly moist nourishments.

Justin Windle's Makisu can not be used to produce sushi obviously, neither can you squeeze fruit-juices with it. Anyway, take a look at it and you'll immediately understand the name. The Makisu navigation menus unfold like a bamboo mat let loose while held on one side. The navigation items roll out and the virtual bamboo mat even swings back and fourth, making for a realistic effect. The dropdowns are made up of list items, one per line. These items can be toggled to show or stay invisible. Unfolding the dropdown leads to the bamboo effect.

Makisu is a mere CSS concept using CSS 3D transforms. As such it only works in some of the most recent versions of browsers, as they are Chrome, Firefox, Safari, and the standard browsers in Android, iOS and Blackberry. Internet Explorer 10 should also be displaying Makisu correctly. As I am testing some of the most recent Ultrabooks at the moment I took one and fired up IE 10 to double-check if something that beautiful but at the same time demanding would really, I mean really as in real not really as on a spec paper, work in a Microsoft environment. I did not get disappointment, given that I expected it not to. Makisu actually works, but the whole experience is sluggish, slow and all the animation effects are left out. No elegantly swinging at the end of the process. Microsoft proves to be reliable... 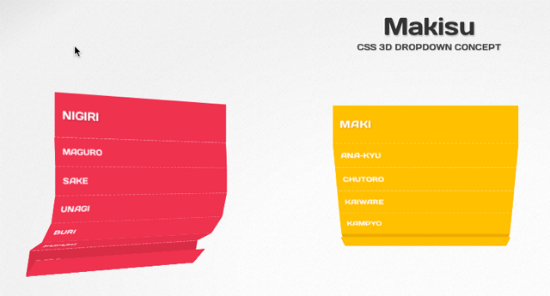 Makisu as a CSS concept would not be very easy to implement into your own website. That's why Justin wrapped a jQuery plugin around it. This makes implementation a snap. Simply call jQuery and the plugin in the head of your document and call the function like this:

The most important parameter is the choice of selectors. In the above shown example it is the regularly used li-element, but you could as well go more exotic and choose elements as to your liking. The other options refer to speed and overlapping. 3D effects are provided by the use of perspective and vertex shading via shading.

Makisu can be downloaded and used free of charge from Github. It is only a few days old and - let me say it again - is a concept. If you are the adventurous kind you could of course put it on one of your live websites. Chances are your customers might complain. But boy, it really looks fancy...