Manifold.JS: How to Build a Hosted Web App on Android, iOS, and Windows 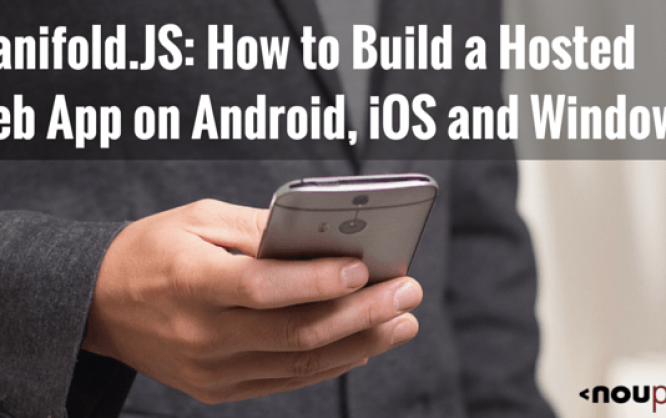 Recently at //BUILD/ 2015, Microsoft announced manifoldJS – the simplest way to build hosted apps across platforms. While John Shewchuk, Technical Fellow and the CTO for the Microsoft Developer Platform, did a great job building a hosted web app right on-stage (you can see the recap here), I’d like to go into a bit more detail: why hosted web apps and how to build one for yourself using manifoldJS. 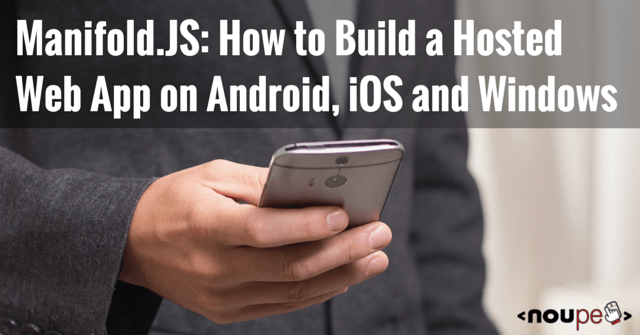 Hosted Web Apps bring the best of the web to store apps on with minimal effort. They are a great way to get more user reach with the experience you’ve already built. And when you update your web experience, your users get the same update in hosted web apps too!

The problem is, until now, the hard thing about hosted apps, was how different the process is on every platform. manifoldJS changes that by putting the focus on the W3C Manifest for Web Apps – a standards-driven, open source approach for creating apps – and then uses that metadata to create a hosted native app on Android, iOS, and Windows.

When a platform supports hosted apps, we build it natively and then we use Cordova to polyfill the platforms that don’t have native support.

There are basically two ways to get going. If you’re a web developer who lives in the command line, start with the CLI interface. For devs who want to run manifoldJS in the cloud, we have the same tools on the website. 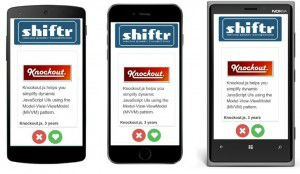 The first thing you want to do, is create a manifest for your website. This should be pretty familiar to web developers, as it’s a fairly simple JSON object. Here is a sample from this site:

For more details on building a manifest file, including how to serve it from your webserver, check out this post on the manifest.

If you want a little help building that manifest, try the code generator on manifoldjs.com site. We’ll walk you through the values you need with the wizard, and then provide you with a completed manifest for your website at the end.

ManifoldJS runs on familiar technology. The only requirement is that you have node.js installed. ManifoldJS will run on any system (Mac, Linux, Windows) but can only build apps for platforms that are supported on that system.

ManifoldJS will handle the install for all of its dependencies through NPM. From there, you simply pass in your website:

From there one of two things will happen:

If you would like to see what’s happening, simply turn on some logging and keep your eye on the console. Along with logging, we have a number of other options you can set to control the output of the tool:

All this same great functionality is available in our web-based tool as well. Visit the web generator and get started. 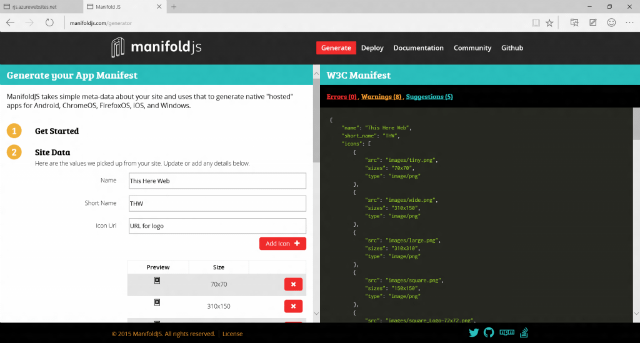 Once you complete the steps, you’ll just click on the download at the end, and a zip with all your packages will be sent to you.

The Manifest for Web Apps allows you to specify the “scope” of your app. This helps determine where your app stops, and the open web begins. Only URLs within your scope will show up in the app. If you’re using more than one domain, or are calling content from our domains, simply add in URI access values to your manifest.

An Even More Powerful Web Experience with Native APIs

As web developers, we are always asking for APIs that help us blur the lines between the feature set of native apps and that of the web. Hosted Web Apps are a trusted environment on most platforms, where the code is tied directly back to a developer. Because of this, some platforms allow you to have access to native APIs that you can’t reach in the browser.

On Android, iOS, and Windows, we use Cordova to polyfill for the hosted apps. The added advantage of this is that you can add the cordova js files to your website and use those APIs in your hosted app.

However, in Windows 10 you actually have access to the entire API surface of Windows Universal Apps, that’s everything from Bluetooth to low-level human interface. To allow these APIs for your app, simply add this to your manifest:

With the access rules in place, we’ll turn on the APIs for you to call directly, or call through the cordova APIs.

We’re working to make the process of building hosted web apps even easier, but for now there are still a few final steps that will be in hands of the developers to complete. For every platform, we provide how to deploy to each App Store . Testing is an important part of app development and we also have tips and suggestions for getting the most out of your hosted web app. Also, the apps all have to be submitted to the appropriate app stores, and we will point you in the right direction for that as well.

Hosted web apps allow you to develop store apps while maintaining the integrity and uniqueness of the Web. Now, developing those apps just got a little simpler with manifoldJS. You focus on the web standards, we’ll do the rest.

It might surprise you a bit, but Microsoft has a bunch of free learning on many open source JavaScript topics and we’re on a mission to create a lot more with Microsoft Edge. Check out our team’s learning series:

Jeff Burtoft is as a technical evangelist at Microsoft. Jeff co-authored his first book entitled HTML5 Hacks (O'Reilly Media) and is a founding blogger at html5hacks.com.  He’s been in positions like "web master" for the Department of Defense to Principal front-end Engineer for a fortune 500 company. Jeff is a huge proponent of web standards, and loves all programing languages, as long as they are JavaScript.  Jeff lives in Texas with his wife and three children. In his free time, he enjoys writing Apps and playing video games with his kids.  Read his blog or follow him @boyofgreen on Twitter.

Home » Manifold.JS: How to Build a Hosted Web App on Android, iOS, and Windows