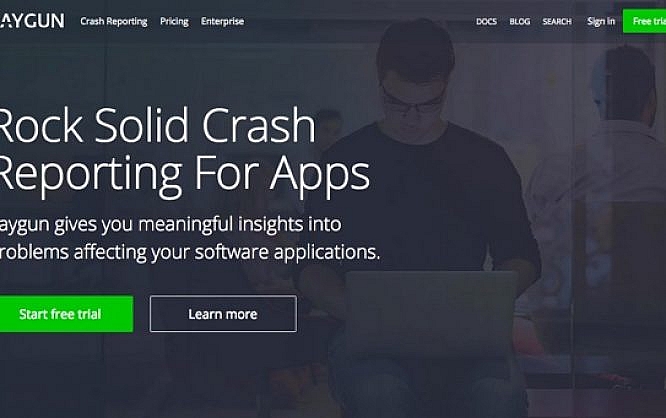 The job of developers is great. They are always creating something new. Whether it is a web app based on PHP or a mobile app for iOS or Android or just about any other thinkable app for devices out there, coding is universal. On the downside, errors are universal too. Chasing errors is the part of the job any developer just hates. This will change once you discover Raygun. Raygun chases down all the errors for you, even before you or the users of your app have had the chance to notice they exist. Welcome to a dream come true. 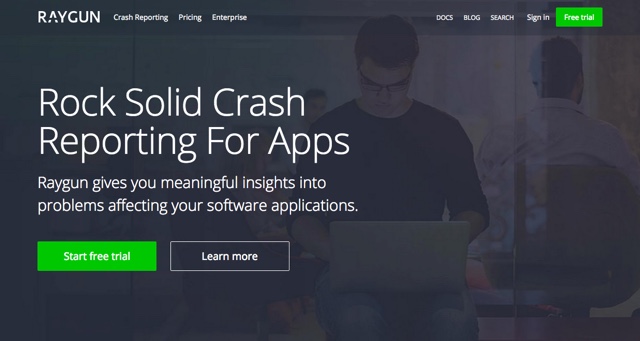 Raygun itself is developed in New Zealand. Should you ever have had the chance to visit this great country, you will know that out of New Zealand anything seems possible. Raygun, the crash reporting solution for just about any app you might ever want to develop is a proof for that. Digging up and eliminating errors in software projects cannot be a lot easier. The process is simple. Raygun provides an API and a large flock of libraries for a large bunch of supported languages. Once you’ve signed up for an account you get access to your personal API key that you will need to identify against the service. Adding Raygun reporting to a software project is a matter of minutes. The process varies slightly from language to language, but generally you will just add the appropriate library to your code. All the rest happens automatically from there on and can be configured from the backend of the service. Raygun’s dashboard gives you access to the power of crash reporting in a modern and even intuitive way. Besides using the dashboard as a command central, you can have error reports be sent to you or just about any team member via email - down to each individual error or grouped according to certain criteria. 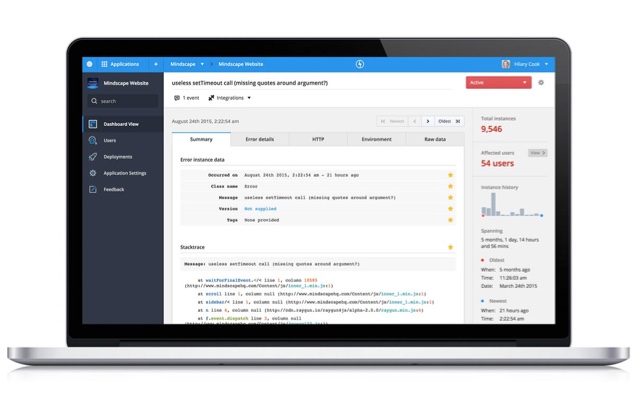 Raygun’s Dashboard is Modern and Intuitive If you prefer a different way of integration with your workflow Raygun has you covered. An impressive number of plugins makes sure to integrate error reporting into just about any relevant tool your team might be using. Just to name a few there are integrations with Trello, Slack, and Bugherd, which is enough to win me over personally. Errors can be channeled into Slack or set up as a ticket in Bugherd. Raygun is even smart enough to check an error off once it has been addressed in Bugherd. Collaborative development is supported through integration with Github, and Microsoft developers will be happy to see integrations with Visual Studio.

Raygun: Documentation and Other Supportive Offerings

Often developer services are created in a way that even developers are having a hard time figuring out how to make use of it. Raygun is an exception to what I would be bold enough to call a rule. The documentation has to be called more than thorough and elaborate. The FAQ is more detailed than that of others, and the docs themselves leave no question unanswered. 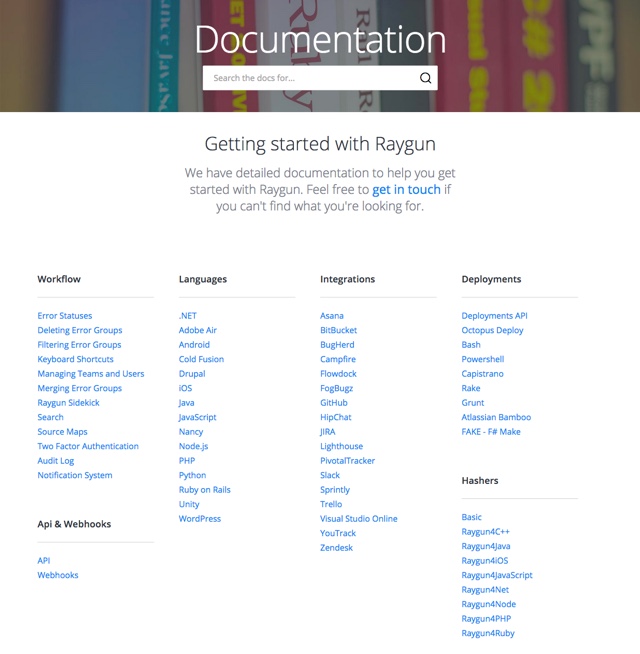 Raygun maintains a blog for developers that adds even more value as it is not limited to covering aspects of their own service but also general programming issues. Check out this article on helpful tips for those that need to switch between Windows and Mac regularly. Subscribing to their news feed is helpful to any developer - whether Raygun is used or not. The blog is not only the typical fig-leaf of the average company out there, but a regularly updated content offering targeting at bringing developers forward. 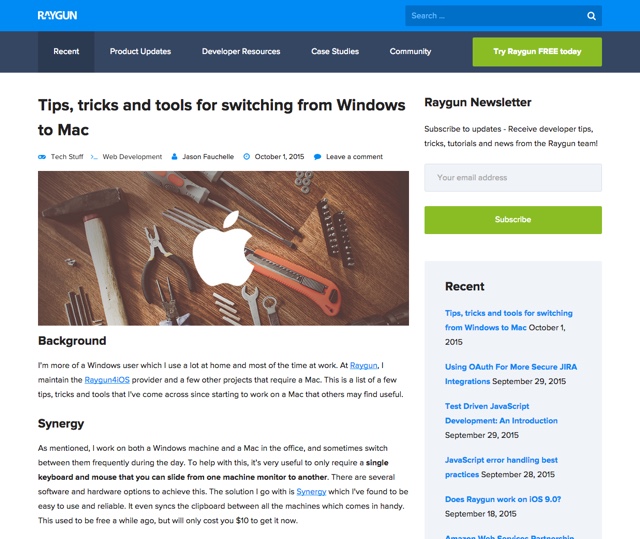 Almost any paid service has free trials nowadays. But a free trial is not a free trial. How often has a service asked you to enter your credit card information first thing after having clicked on that „Free Trial” button? They only want to make sure that you are a real person with a real interest in checking the service out, and they promise not to bill you before the trial period ends - we’ve all been there more than once. I avoid these services. Raygun has no strings attached. They do not ask you for payment information during the course of the free trial. You are absolutely free to evaluate the service uncomplicated and right away. Just enter your first and last name and email address. Then choose a password. That’s it. To make the signup even easier you can choose to authenticate via Github, Google, Twitter or Facebook. Should you decide that you want to stick with Raygun after the 30 days are over, there is still time enough to enter the needed data ;-)

Prices vary with the number of errors tracked and apps monitored while in all plans you can have unlimited team members. If you have not more than five apps to watch and expect not to receive more than 25k errors per month you might think about going with the Small Plan for 49 dollars per month. Prices then rise to 149 dollars in the Medium Plan to 499 dollars in the Large Plan - see the pricing chart below. Annual payment saves you 10 percent off of any plan. 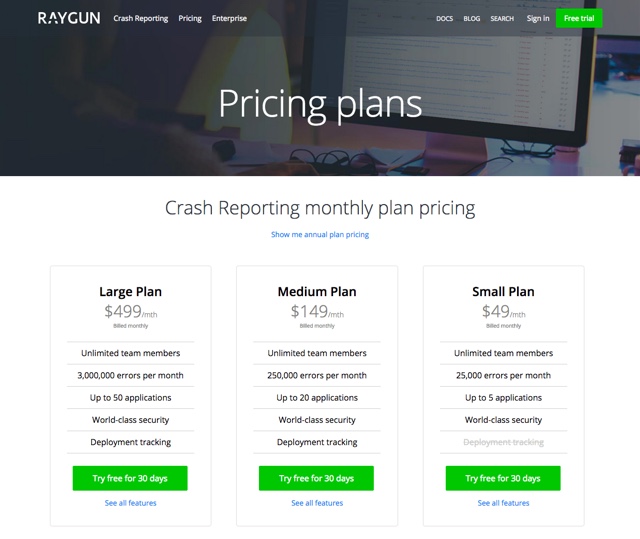 Should even the Large Plan seem to small for you or should you want to run Raygun on your own infrastructure, don’t hesitate to contact the friendly staff at Raygun to have them figure out an individual offering to best suit your needs. Just starting out you may be unsure to find the fitting plan for you. Simply go with the smallest plan you estimate might be adequate. You can always grade your plan up and down as needed in accordance with your chosen billing period. Should the actual volume exceed the capacity you have booked Raygun leaves you the choice to either upgrade to the next plan or cap processing at your current plan level. I’d wish every service provider would have such a fair pricing model. Make sure to check out the handful of case studies Raygun has published. It is always worthwhile to see where other developers see the value of a service. Now it’s up to you. As I already stated, the 30 day trial is actually free with no strings attached. There is not much reason to not try it. So let me close with a quotation from Shia LeBeouf’s popular motivation video: „Just Do It!” Disclaimer: This article is sponsored by Raygun. They took no influence in what we wrote however.
105
SHARES
ShareTweetLinkedin