It's been quite a while since we last published an article in our series of iPad apps for the creative professional. As we all know there is no shortage of apps for the Apple tablet in general. Hundreds of thousands can be downloaded. All in all more than 50 billion apps have been downloaded from the App Store since its inception, which allows us to roughly estimate, that each human being walking this earth must own 8 apps on average. Hey, the numbers never lie. The app we want to introduce to you today is called Tayasui Sketches and at first sight it will remind you of Paper by FiftyThree, closely. At second, too... 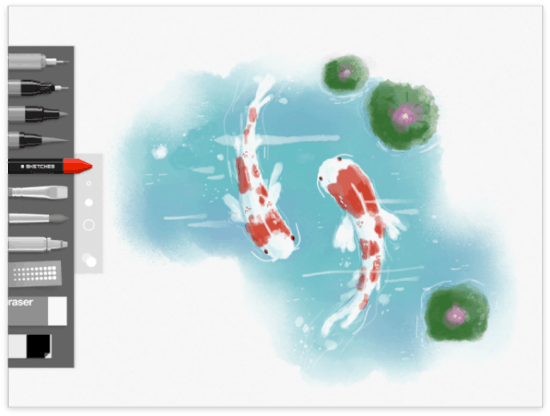 Sketches - Despite a Japanese Name, Created in Paris

Tayasui is Japanese and means "easy and simple". The name of the company reveals its DNA. Driven by illustrator Yann Le Coroller, Tayasui is known for a variety of apps you wouldn't necessarily associate with high-end image editing. Putting apps such as "Talking Carl" or "Mr. Goo" aside, which although being international successes, don't really position Tayasui at the serious end of the app economy, Sketches is totally different. 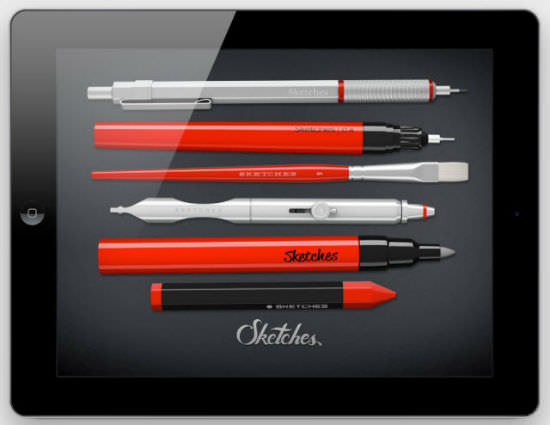 Sketches is, the name does not lie, an app for drawing sketches. Of course these sketches can be drawn in the funny tradition of Tayasui's gaming efforts, yet there is much more to this app. Its motto is "beautiful apps make beautiful drawings" (possible, I'd add) and the look and feel certainly lives up to it.

Sketches - Not Only the Paper-Look-Alike Contest Winner

Sketches reminds me lots of the incredible app Paper, which we had here on Noupe several times. There are a few differences though. Let's start with the similarities.

Sketches, once started, offers a white canvas with a group of drawing tools aligned. There are pencils, brushes, architectural pens, watercolor utilities, everything you might need from note-taking to real artistry. A color chooser lets you add colors from the wheel to the palette. Undo isn't done by turning the two-finger wheel as it is in Paper, but a two-finger swipe will do a similar job, yet only for the last action. 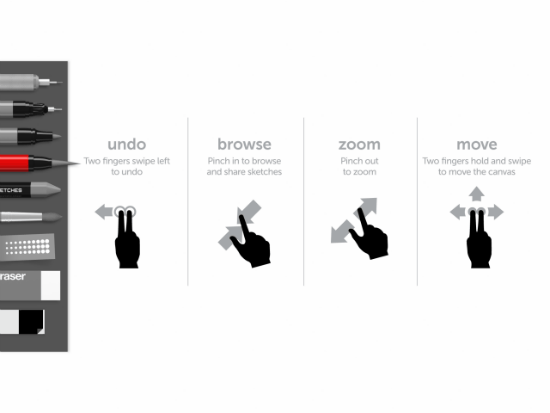 Sketches adds a pattern tool to the mix which allows you to draw pattern shapes. The patterns always take over the colors recently selected in the palette slider. You can pinch-zoom the images to make sure you'll also catch the slightest detail. Pinching out allows you to access your other sketches. Pushing one finger up to the top of the recent sketch opens the share options. Sharing can be initiated to Facebook, Twitter, email or your photo library on the device.

The sharing process shows the gaming background of Tayasui. Your sketch gets shown as being put into an envelope with the sharing target being a stamp you have to stick to it. After that you'll push the sketch inside the envelope and sharing takes place. This does all look very nice and I won't object in any way that this is not a beautiful app. In fact, it is!

Sketches - More Features to Pay for

As far as we have come now, the app is totally free. There is an in-app option, though. For 1,79 € you'll get the possibility to change the shapes and sizes of brushes and strokes. There'll be two more tools, an airbrush and an acrylic paint brush. You can pick up any color from the drawing directly using an eye dropper and you can control tool opacity. 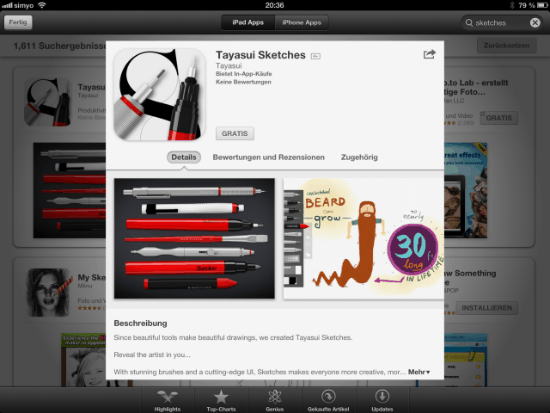 That way the whole package gives you more functionality than Paper does at a lesser price. I do think that Sketches actually does target the same group Paper does. The similarities are striking. Try both and you'll see what I mean.

One big difference remains. Paper aims at whole notebooks with sketches to one topic while Sketches actually works with individual sketches. As this is only a matter of work-flow it is up to you which one suits you better.

Either way, Sketches is worth the storage space it takes up on your device. You should definitely give it a try.

What's your take on the matter? Which one is your favorite, if any? What would you recommend to creative professionals seeking ways to express their creativity on an iPad? Let us know in the comments below!