What are the Top 7 PHP IDEs and Code Editors a Web Developer Uses? 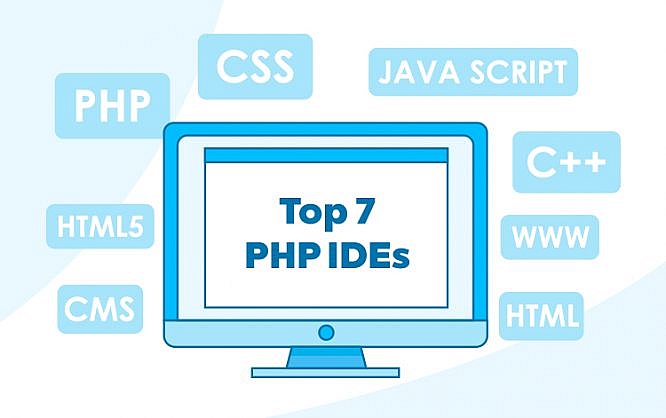 Confused to use PHP or any other web development languages? Are you looking for PHP website development?

And not being able to select between best IDEs and code editors to build your PHP web design? PHP is preferred over other programming languages based on the project requirements. Here in this blog, we are going to briefly describe top 7 PHP IDEs and Code Editors, PHP developers can use for web development.

PHP is the acronym of Hypertext Preprocessor which is a general-purpose programming language and written at the server-side. It is widely used for developing dynamic and interactive web pages. It is free and easy to use programming language. If you are a newbie and want to learn PHP, there are several tutorials available online which will ease up learning PHP for you.

For experienced, when it comes to the exact definition of an IDE and a code editor, they still get confused. So firstly we will find out the difference between IDE and Code Editor and then move ahead to discuss the top 7 PHP IDEs and Code Editors a web developer uses.

Writing code is one of the common skills among developers. However, they do find it difficult to differentiate between the definition of an IDE and a code editor. The crossover of features between the two could be considered as the reason behind such confusion.

To understand IDE, it is an Integrated Development Environment that comes with a self-contained package that allows developers to write, compile, execute and debug code in the same place. Whereas, a code editor is a text editor enriched with features enabling writing code using native capabilities or via optional plugins.

IDE allows writing code in a specific language. You can even compile/interpret and perform debugging as well. Whereas code editors are more general in purpose, they can work on different programming languages. Also, there is a limitation of just writing code with the code editors.

However, Code completion, highlighting a section of code, hints and custom folding of sections of code are a number of common features between the IDE and code editors. Which one do you choose out of IDE and Code editors? It totally depends on your personal choice, the programming language you are working on and workflows as well.

Here is the list of web development tools that hold high priority among the developers. I hope this blog will help you choose an appropriate one for your projects in 2020.

PHPStorm is one of the most popular IDE tools, developers used for PHP web development. It is updated with all the latest features to enable you with rapid web development. JetBrains is the authority behind its development and release in 2009. PHPStorm is written in Java since its launch and has been among the first choices of developers for writing code in PHP.

PHPStorm is compatible with working with all the key frameworks such as Symfony, Yii, CakePHP, Zend Framework and Laravel. Also, it allows working on Content Management Systems (CMS) including WordPress, Drupal, and Magento.

If you are using this platform with Zend Debugger, you can easily integrate it with databases like SQL and composers, vagrant, rest client, remote deployment and command tools.

Eclipse is another name that comes to the mind of the developers when asked for the most widely used IDE in the field of web development. It was launched in Nov 2001 and is a cross-platform tool that can be utilized for any operating system whether for Windows, Linux or Mac. Most of the developers used this IDE for Java and Android development, however, the efforts of Eclipse community developers made it possible to use for other development languages using plugins.

If you want to develop a PHP web application using Eclipse, you have to download it and install the Eclipse package for PHP developers. It is an open-source and free to use tool which comes packed with all the capacity to support PHP languages like Git client, XML Editor, and Mylyn.

NetBeans also makes its way to the list of world’s most popular IDEs for PHP web development. It is feature-rich, free, and supports multiple languages like English, Japanese, Portuguese, Russian, Brazilian, and basic Chinese. A wide range of developers uses this open-source IDE for PHP website development.

NetBeans was released in 1996 which initially supported only Java and was pretty slow, but now it becomes much faster than others and supports multiple languages like PHP, C/C++, and HTML5. Not even this, you can use it for a range of PHP frameworks and WordPress CMS.

NetBeans is one of the most preferred IDE tools due to its features like code templates, smart code completion, quick fixes, getter setter generation, hints, and refactoring. Other than this, it avails developers with functionalities like formatting, rectangular selection, code folding and try/catch code completion.

Zend Studio is among the top commercial PHP IDE for PHP website development. It targets professional web developers and currently enjoys a clientele of over 40,000 developers for the development of PHP websites.

Some of the key features which make Zendio Studio more preferable among others is its fastest performance, validation while coding and searching the PHP Code.

Not even this, Zend Studio allows mobile app development based on existing PHP apps and server backend. This way, you can easily coordinate between current websites and web applications with mobile-based apps.

ActiveState developed Komodo IDE in the year 2000. Now it has become a highly preferred PHP MySQL development and functional tool. Komodo inherits most of its functionalities from the Python interpreter. It is compatible with Mozilla and Scintilla because the number of features and functionalities among them are similar and utilizes common languages as well.

Komodo uses numerous extensions and pipe features which turned it down as a huge success.

It is another PHP development that is very useful to perform like a pro text editor, i.e. for prose, markup, and code. Sublime Text 3 comes with an amazing feature- a custom UI toolkit that allows users to play across words, symbols or lines using particular key shortcuts for the activity.

In addition to this, the user can make changes to any section of code at any time. Such facilities of Sublime Text 3 make it the most customizable and flexible text editor that exists.

You can easily convert this text editor into a graceful Sublime PHP IDE with the help of different plugins and packages that are available in the market. Some of the popular names which are most helpful in doing so are package control, xDebug client?—?CodeBug, Sublime PHP companion, Simple PHPUnit, PHPCS, CodIntel, and PHPDoc.

Converting a text editor into a PHP IDE using add-on packages, avails developers with the ease of PHP development. They can enjoy the classiness of sublime text and the sturdiness of PHP at the same time.

Atom is a free, open-source text and source code editor from GitHub. It is one of the best cross-platform development tools that support working on various OS like Windows, OS X, Red Hat Linux, Fedora 22+ and Debian Linux. Atom consists of a dedicated ecosystem that is supported by a vast community. The availability of numerous plugins and packages in the market improves its functionality to the next level.

When it comes to PHP, the Atom editor can easily be converted into a fully-featured PHP IDE using packages available free of cost. These packages turn atom editor more effective than any other commercial PHP IDEs in the market. It includes hyperclick-php, php-cs-fixer, atom-autocomplete-php, linter-php and php-integrator-base.

PHP is one of the most preferred programming languages for web development. There are a number of PHP IDEs available in the market which are getting better day by day. Here in this post, we covered most of the PHP development tools which come with different functionalities. However, the universal objective behind is transforming web development into a convenient platform to write scalable code swiftly.

My name is Hemendra Singh. I am Managing Director and Co-Founder of The NineHertz, a Mobile App and Web Development Company. My ideology is that a clear vision and hard work builds a great company. I started my career in Information and Technology 10 years back as a new-age Entrepreneur in the emerging Digital World. Now I can proudly say that The NineHertz is among best IT companies in World.

Home » What are the Top 7 PHP IDEs and Code Editors a Web Developer Uses?