Why is Containerization So Critical For Running Apps With Micro-Architecture? 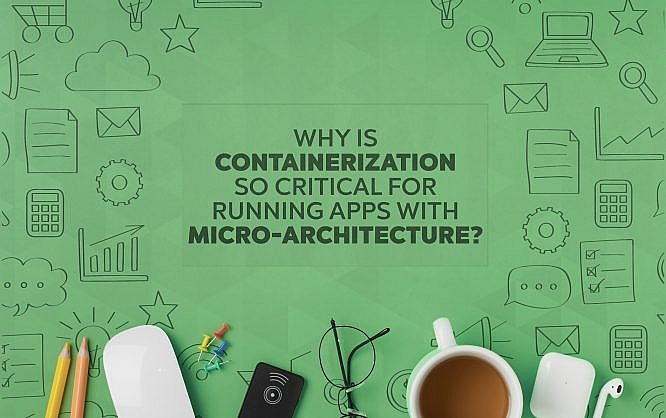 Historically, mobile app development has been based on monolithic architectures that are rigid in nature. In such an architecture, the different functionalities and components of an app are in a single instance.

These apps have a micro-architecture that provides a wide range of benefits to the developers, though it does have its negatives as well.

But before we jump into the nuances of the relationship between containers and apps with micro-architecture, let’s first understand “what are microservices and containers?”

Microservices is a modern approach to mobile app development in which the architecture of an app is split into multiple services with a dedicated micro-function within the app.

Each microservice has its own logical function and is a deviance from the old-school style of monolithic app structures, in which, as we discussed, all components are in a single instance.

Containers are like boxes or packages used to store everything that an app needs to function, such as code, libraries, binaries, and dependencies. It is a self-contained unit that helps with the development, shipment, and deployment (even on the cloud) of an app, alongside the hardware requirements.

Today, the two most famous containers in the industry are Dockers and Kubernetes. They are used to build and run containers, though it is fair to say that Kubernetes is rising as an industry standard, with its ability to run multiple containers in different computing environments.

So what’s the relationship between microservices and containers? Essentially, you put your microservices in containers. Though it is possible to use Virtual Machines for this purpose, containers take up less space and are faster to boot.

The development of microservices or apps with micro-architecture is the answer to the problems associated with monolithic application development.

I will be explaining these problems and how they are solved in apps with the benefits of containerizing apps with micro-architecture.

Working With A Smaller Codebase

Since each component or service within an application has its own container, developers have a smaller codebase to work with. This helps boost development speed by simplifying individual tasks.

There are bound to be fewer complexities and dependencies of functions in apps with micro-architecture that are developed in containers than monolithic apps.

The application’s technology stack can differ through microservices.

Scalability will be independent of each microservices.

Developers have the ability to scale different components of the app, depending on the resources. Unlike in monolithic apps, containerized microservices eliminate the need for making multiple instances of every component during the scaling process. It saves you from making multiple copies of the whole app and makes the process much more efficient.

As each microservice within an app with micro-architecture are in their own containers, a bug in one of those services is unlikely to malfunction the entire system or disturb any other microservice or component of the app, since there’s limited dependency.

In monolithic apps, one bug, if not caught properly, can bring down your whole app’s process and system, setting back the work you’ve done.

Though it’s true that micro-architecture apps came into existence as an answer to the problems of monolithic app architecture, they came with their own set of drawbacks and limitations.

From splitting monolithic structured apps into microservices to managing apps with micro-architecture, these are some of the problems that arise in the process.

Some problems with a containerized micro-architecture app are:

Keeping Track of Microservices is Harder

As the number of microservices grows, especially for enterprise mobile app development, it can become hard to keep track of all of them.  Setting up continuous delivery and continuous integration can become a hassle when you’re dealing with the complexity of managing multiple microservices.

Microservice-based mobile apps require an increased number of network calls when there’s an interaction between two different microservices. This is one kind of problem that doesn’t exist within monolithic app structures.

How you handle this inter-services communication, deal with errors, and increase test cases for each service can be a challenging notion for developers, which is much simpler when you have to only deploy one instance of an app in monolithic apps.

Tracing bugs can take a lot of time

While bugs in one microservice are isolated to its own container, in the cases where there are different routes that your microservice uses to communicate with other microservices, it becomes harder to identify and locate faulty code or bugs and can take up a lot of time.

Tools That Can Help You Execute Apps With A Micro-Architecture

Kubernetes is a container orchestration platform that allows developers to develop, deploy, and scale all of their containers. It offers them the ability to automate the deployment process of a containerized microservice, making it.

Istio is an open-source service mesh designed to mitigate some of the drawbacks that come with micro-architecture apps. It helps you manage a distributed microservice architecture by providing a robust mechanism for tracing, monitoring, and securing your microservices.

It provides security within the microservice while allowing you the ability to manage the traffic of your microservice.

Istio can be integrated on top of Kubernetes, making it extremely useful and incredibly accessible for developers to use.

Is Containerization Essential For Running Apps With Mico-Architecture?

I think while it’s not necessary to use containers, it’s the ideal choice for mobile app development. Kubernetes is an open-source container orchestration platform, which means that building your app with a micro-architecture using it will not be a huge challenge, but will ensure that your app is ready to scale and grow.

The decision between using a microservice architecture vs. a monolithic architecture should be based on scalability and long-term sustainable usability.

While you can start your mobile app development project using a monolithic structure if you scale it as such, then containerizing it as a micro-service architecture later can be an incredibly challenging task. So if you’re planning for the future, it’s ideal to initiate your mobile app development project as a containerized micro-architecture app.

This helps you leverage rapid development and production, giving you the ability to develop enterprise-level mobile apps.

Jane Collen is a distinguished and highly experienced industry voice. She is an incredibly eager learner and is always excited to write about new and trending topics, but her field of expertise are 2D animation, app development, emerging tech like AI, Big Data, and the field of outsourcing for businesses.

Home » Why is Containerization So Critical For Running Apps With Micro-Architecture?