Fed Up with Unreadable: Are You a Human realises Captchas in the Form of Simple HTML5 Games

16
SHARES
ShareTweetLinkedin
You know these sickening Captchas any web form these days brings before your eyes. Want to download something? Captcha. Want to send in a complaint to your telecom provider? Captcha. This would not even be a problem if it were only annoying. But more often than not, these Captchas are plain unreadable. Even if you own eagle's eyes you will surely have experienced difficulty in deciphering common Captchas around the web at one point or another. What was once supposed to be unreadable for machines turns against its inventors. Is Skynet just around the corner? Anyway, alternatives exist. „Are You a Human“ offers a Captcha method that does not depend on blurry text and your deciphering abilities. Instead, these Captchas are little games, the so-called PlayThrus. 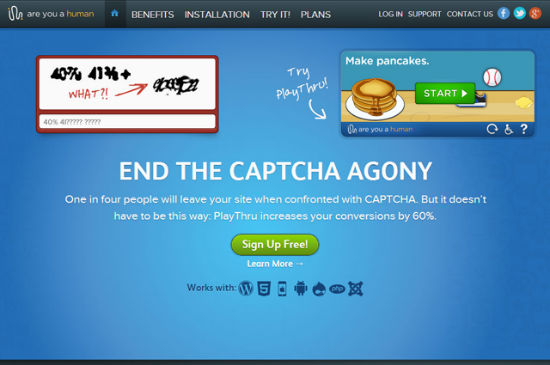 Alternative to Undecipherable Captchas by „Are You a Human“

The principle of „Are You a Human“ is simple: Users have to accomplish a small game to prove that they are human beings. Obviously these games cannot be solved using spam bot techniques. All the different games have in common that the player has to sort things in some way or the other. Users need to place aliens on their home planets or basketballers on their court. Other variants exist. These games are nothing near of challenging and can be solved in a mere few seconds. Usually the games can be solved in less time a classical Captcha would have taken. And they are much less frustrating. Having "won" the game, users can proceed to wherever they were wanting to proceed, be it sending off a web form or entering a site area spam bots are not wanted on.

PlayThrus: Embedded via Plugin or Library

To have the service embedded by third parties, „Are You a Human“ offers plugins for common CMS such as WordPress or Drupal. These plugins are limited to the protection of web forms though. If you need more, you should take a look at the different libraries available. These tools allow for the protection of site areas also and are available in flavors of Perl, PHP and others..

PlayThru Examples All available plugins and libraries are documented. Libraries are very flexible. Actions to be taken after a successful PlayThru are defined via a simple If query. It is this functionality that allows for the protection of more than forms.

„Are You a Human“ comes with a free plan called Basic. Basic does not limit you on the choice of PlayThrus. But it does limit you in the way, that you cannot choose, which game you want your users to be required to solve. Furthermore that Basic plan does support English instructions only. These limitations are history when you decide to book the Personalized plan for 19 Dollars per month. Here you can choose games explicitly and support the native language of your website. If the "Are You A Human" branding does annoy you, you should consider subscribing to the Professional plan for 79 Dollars per month. This choice allows you to remove line and link. Conclusion: „Are You a Human“ delivers a nice alternative to the nerve-wrecking Captchas today's web imposes on you. As they are created using HTML5, they do run on mobile devices just as well. (dpe)
16
SHARES
ShareTweetLinkedin

Tags: are you a humancaptchaplaythru

Home » Fed Up with Unreadable: Are You a Human realises Captchas in the Form of Simple HTML5 Games