TemplateMonster: More Than 30,000 Templates For Your Next Web Project

This name does stand for itself. TemplateMonster actually is a monster in terms of size and variety. More than 30,000 templates for various CM systems as well as plain HTML/CSS, Bootstrap or even Flash are available. It is impossible to not be able to find that one template you've always been looking for. More likely you'll not find one but one dozen, leaving you spoilt for choice. No matter whether you prefer WordPress, Joomla, Drupal, Shopify, Magento, Bootstrap, plain HTML, Wix or whatever. TemplateMonster has you covered. Let's take a closer look at their offerings... 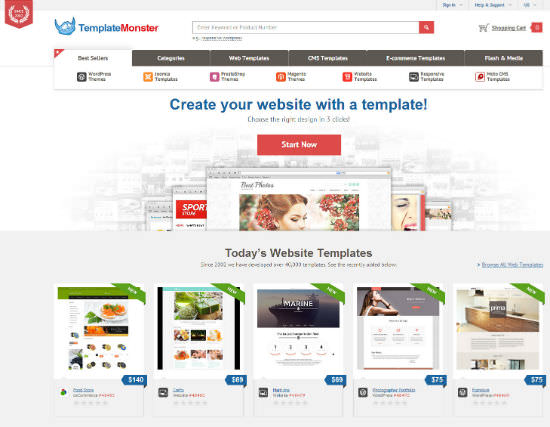 TemplateMonster: A Veteran in its Field

TemplateMonster was established in the year 2002 and has since been expanding. Expansion wasn't only in size, but also in regard to internationalization and support for multiple platforms. Today TemplateMonster operates localized outlets in Spanish, Russian, German, Polish, Italian, Turkish, French and Brazilian Portuguese, besides its native English, of course. TemplateMonster is available in all the most important markets worldwide, even Japan sees its own store. Having survived 12 years in a wildly moving market such as template design proves that they obviously do something right. Today, as I write this article, TemplateMonsters put 12 new templates online. 12 new templates - in one single day. These developers definitely don't sit on their hands.

TemplateMonster not only sells you templates, but sells you customization on top if you need it. They have templates with entry level complexity and they offer boilerplates for advanced developers. That way, TemplateMonster addresses everybody involved with design. Segmentation takes place inside the service. 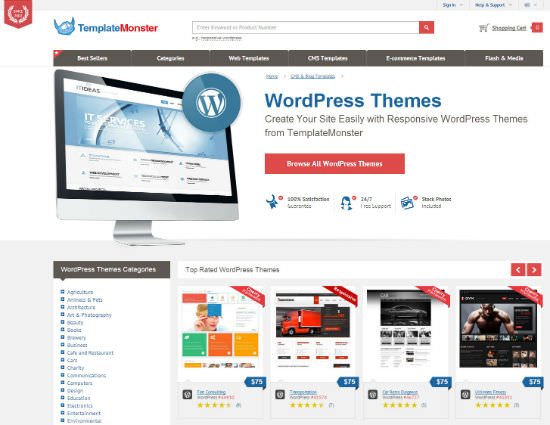 It's the nature of the beast. With a growth as fast paced as theirs, customers will need a little bit of knowledge as to what they are looking to achieve and how they should sensibly approach it. What is the guy talking about?

Take Flash for example. Anyone in their right mind would certainly not recommend building a next generation website upon the proprietary Adobe technology. A few years ago, Flash was extremely hot and I myself built a large site for a governmental organization entirely based on Flash. They ordered a relaunch merely 2 years ago, now running plain HTML, but Flash, boy were they impressed by all the moving and shaking. Today, only very few use cases for Flash remain, but TemplateMonster still offers more than 6,000 Flash templates - even the good old Swish is still there.

TemplateMonster claims to have developed over 40,000 templates in the last 12 years, of which around 10,000 have been taken down for various reasons, so that there are 30,000 actually downloadable. No wonder, that from today's point of view not all are still top notch.

That said, you shouldn't mistake me. This is not criticism, just something that needed to be clarified. TemplateMonster still offers more recent, state-of-the-art templates than you will ever need in your developer lifetime. And, I mentioned it earlier, TemplateMonster is moving fast.

Take Bootstrap for example. Introduced towards the end of 2011, TemplateMonster already offers almost 2,000 templates based on the framework. HTML5 templates amount to the massive number of more than 12,000 pieces. Flat Design saw its rise in popularity just last year. TemplateMonster already offers almost 500 templates following that design style. More than 2,000 WordPress themes serve each and every niche. 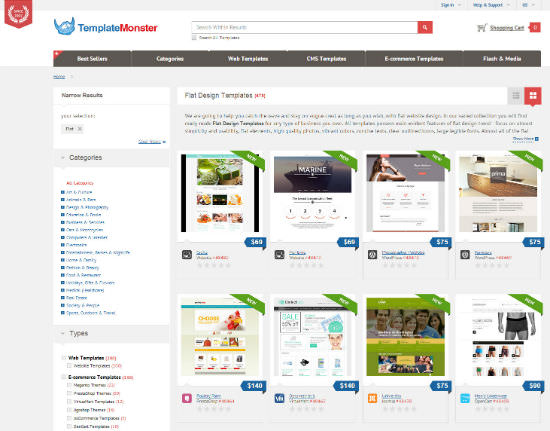 TemplateMonster: Ways to Your Dream Template

With more than 30,000 templates available, finding ways to retrieve them is crucial. A simple free text search functionality wouldn't suffice, though most of TemplateMonster's competitors offer exactly that.

At TemplateMonster finding templates is much like finding products over at Amazon. You can of course search freely by entering a more or less appropriate phrase, but then you are able to narrow down the results by adding additional parameters.

You can narrow down to type, e.g. WordPress. You are able to set specific features mandatory. You can set all kinds of bits and pieces, even restrict the results to a specific color scheme. In my test cases I always ended up with a handful of very suitable suggestions. If you are not into targeted searching, just browse the categories and get lost in thousands of great looking designs.

If you need further assistance, a Live Chat window offers advice. A large help center answers any question that might occur throughout any of the processes.

By the way: If you know TemplateMonster already, but haven't visited them for a while, do it now. They just relaunched the service in contemporary layout, feeling way more modern than about two weeks ago ;-) Not all localized sites have been relaunched though. So, if you are a German reader, change the .de.com to only .com and soothe your eyes...

Buying a template at TemplateMonster is pretty straight forward. Once you've chosen the one that suits your needs, clicking its preview image leads you to the detail page, where all of the monetary questions will be answered, alongside information concerning the technical details.

Template prices start with the relatively cheap single site license. At prices typically below 100 USD you are allowed to use the template on a single domain. Additional customization is available at individual rates shown below the initial price. Changing the color scheme, implementing your logo, changing content of up to 6 pages, header customization or adding an Admin section to the back-end of the CMS is all offered for instant ordering on click. You do not need to buy these additional services, of course, if you feel fit enough to do that customization by yourself.

Buying a hosted template is also possible (if applicable). You do not even need to care for a separate hosting plan then. Not my cup of tea, but if you are the turnkey ready type, you might want to take a closer look at that option. Furthermore you might opt for a developer's license, allowing you to use a chosen template on up to five domains. And if you're feeling luxurious, consider buying the so-called Exclusive License and shell out quite some dollars.

If templates include stock photos, your paid license includes the use of these photos, too. This is an important information, as most of the offerings I know make you waive the included photos and have you look for similar content elsewhere. Speaking of what's included, all the templates include the source files that were needed to create the templates, mostly PSDs or vector sources. That way, you can easily customize even the core design of your new template.

Googling for experiences with TemplateMonster brings up some negative issues, too. As you'll find that anyway, why not address it directly? First and foremost it needs to be said that criticism in times of the internet has a different quality than ever before. While in the past minority complaints mostly remained unheard, which is actually not a bad thing as what annoys a handful but not the masses may possibly be irrelevant overall, today each and every negative comment gets read and people tend to write negative comments while omitting positive ones.

That said, some people complain about the code quality of some of the templates. As I mentioned earlier, the template repository has constantly been growing since 12 years. I do not expect a template from - say - 2009 to have top notch 2014 code quality and neither should you. I also don't expect TemplateMonster to grant for lifetime up-to-dateness of all of their themes. Others complain about customization being not easy enough, while having long pockets and short arms. If you can't do it, buy it from them or get a web developer to do it. A few others complain about having to verify their identity during the payment process, which is required to prevent fraud. Having sold digital goods myself, I understand everybody who implements fraud prevention policies.

All in all, these issues are no valid points to prevent you from buying at TemplateMonster.com. Take my advice and look for recent additions to the repository. With 12 additions daily, you shouldn't fall short of choices easily. Now follow this link to see for yourself...

Home » TemplateMonster: More Than 30,000 Templates For Your Next Web Project