How does AI help in software testing? 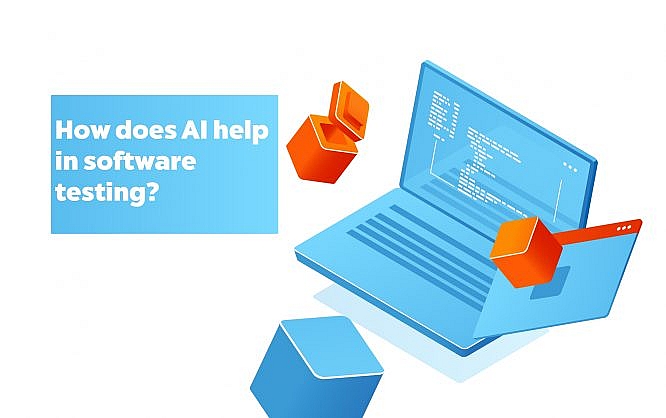 Testing refers to a process to find out the flaws, errors, and bugs within an application before its launch in the market. It ensures customer satisfaction and offers assistance in protecting the application against certain failures.

Testing is done on a wide scale by the software development industry to save a wide array of costs at a later off stage. You can ensure high quality for the product by choosing software testing processes for the software.

It contributes to being a planned process in which the software is analyzed and assessed under specific conditions for understanding the risks and threshold which is involved in a certain implementation.

While the life cycles of software development are getting more complicated daily and the delivery time for the software reducers, it is a prerequisite for the testers to provide evaluations and feedback to the development teams instantly. Considering the launch of new products and software, it is hard to find a better alternative other than testing harder and smarter.

Software released which used on occurring every month, now happens every week and the updates are factored on every alternate day. Hence, it is a prerequisite that the key to streamlining of software testing and making it more efficient and smarter is recognized to be Artificial Intelligence. With the assimilation of machines which have the ability to mimic the behavior of human being, the teams of testers are capable of moving the usual route of manual testing models and move forward progressively towards the precision-based and automated continuous testing procedure.

A continuous testing platform that is powered by Artificial intelligence has the ability to recognized different changed controls more effectively and efficiently, in comparison to a human. With the consistent updates of the algorithm, you can observe the slightest of the changes. When it comes to automation testing, it is possible to use artificial intelligence in a plethora of object application categorization for a wide array of user interfaces. You will be capable of categorizing different recognized controls while creating the tools. Testers are capable of pre-training the controls which are commonly found in different out of the box setups. As the hierarchy of different controls is observed, the testers are capable of creating a technical map so that artificial intelligence is used along with a Graphical user interface with an eye to procuring labels for various controls.

Testing involves the verification of different results. Hence, you require getting access to a wide array of test data. Google DeepMind comes up with the Artificial Intelligence program which makes use of deep reinforcement learning for playing video games, thereby producing a bunch of test data. Thus, artificial intelligence will gain success in observing different users performing exploratory testing, within the specific testing site with the aid of the human brain for assessing and identifying different applications that are being tested. Thus will be bringing the users of business into testing and customers will be capable of automating the test cases fully.

Here are some of the uses of artificial intelligence in software testing:

A human being makes errors. Even the most intelligent software tester commits mistakes at the time of conducting monotonous manual testing. This is where automated testing is useful as the same steps are performed each time; they are executed, in an accurate manner. Thus, you are not going to miss the recording of results in a detailed way. Testers who do not perform manual tests have additional time for the creation of new automated software deals and tests within specific sophisticated features.

Go beyond the limits of manual testing

It is not possible for the Quality assurance and software departments for the execution of a controlled website application test with more than one thousand users. With the aid of automated testing, it is possible to simulate thousands, hundreds and tens of virtual users who are capable of interacting with a web-based, software and network application.

Useful for both testers and developers

Developers use the shared automated tests on a wide scale for understanding the issues prior to sending them to Quality assurance faster. It is possible to run tests in an automated manner as changes are introduced in source code and provide notification to the developer of the team as they fail. Such features are useful to the developers in saving time and boosting their confidence.

With the aid of automation testing services, you will gain success in enhancing the overall scope and depth of the tests which results in the improvement of the quality of software. Automated software testing can look into the file contents, memory, data tables, and internal program states with an eye to determining whether the software is behaving as it was expected. The test automation is capable of executing more than one thousand test cases in each test run, thereby offering coverage which cannot be achieved with manual tests.

After the setup of the initial investment, you will be capable of carrying out the test automation. Business firms are known to confer greater and better testing rewards without burning a hole in your pocket. As you can save a lot of money in this process, you can make the best use of this money towards the quality assurance efforts for the testing of exploratory testing or uncovered areas or the creative or more exciting parts of software testing.

Stella is a Content Writer and Digital Marketing Analyst at Indium Software with a demonstrated history of working in the information technology and services industry. She has written articles on software testing services, big data, analytics and latest trends in the tech world. She likes to try different cuisines and travelling to new places.

You are here: Home / Essentials / How does AI help in software testing?
Close
Do you want to read more similar stories?