Create The Web, Adobe’s conference jumpstarting new product lines and innovations for web developers, has debuted in San Francisco. In the next two weeks people in other parts of the world will have the chance to attend too, as the conference is moving from London to Tokyo to Sydney. What you will see there is a bunch of new tools seeking to make web design easier and faster. The whole suite of tools is called Edge and here at Noupe we will be taking closer looks at its parts in the coming days. Accompanying the release of Edge, Adobe introduces another font under the Open Font License. Again it has been designed by Paul D. Hunt and again it is freely available from its SourceForge repository.

It has only been a few weeks ago that Adobe surprised, then delighted the developer community. The publication of the first font under Open Source License was a fantastic success, as Paul D. Hunt himself confirms in his latest blog post. Not only has Source Sans Pro already been downloaded almost 70.000 times. The blog post announcing the first free font from Adobe is the most-read article ever published in the Typblography blog. At Noupe we were also excited to see Adobe’s new initiative. 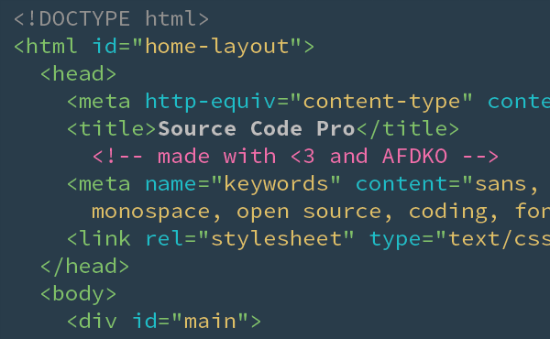 With the announcement of the Edge suite of tools, the initiative becomes clearer. Developers around the world were puzzled as to why Adobe suddenly changed its mind regarding former strategies that seemed to be written in stone. All right, they said, free software, such as Brackets, needs free fonts, but that couldn’t really catch. In context to Edge the whole change in mind makes sense. It’s not only that free software needs free fonts. It’s much more.

If you are trying to build a new standard tool for programmers, might it be called Edge Code, and you are certain that web fonts are the future of web typography, what would you be keen to establish? Could it be, that you would be seeking an extensive font integration to make it easy for developers to embed a plethora of different typefaces? And, if you were looking for where this plethora already is, where would you look? I’d look over to the ever-growing Google Fonts Directory, wouldn’t you? 500 fonts and counting, that is what I’d call huge.

And this is just where Adobe looked, too. In the world of Open Source collaboration is valuable. I scratch your back, and you scratch my back. Both Adobe fonts are already part of Google’s web fonts. That’s certainly nice. Now, what Adobe did, is establish a new web font service by the name of Edge Web Fonts. They host over 500 fonts there and the whole portfolio can be directly accessed through Edge Code and Adobe Muse with more to come. Guess where the 500 fonts stem from? You’re right, they are the same as on Google’s platform. Clever move…

If you click the prominently placed download-button on the SourceForge repository you’ll be provided with a package, that merely contains the fonts in the formats TTF and OTF. If you’re more interested in the raw files for editing and manipulating the character set, you’ll have to look deeper into the repository. As with Source Sans Pro they are there, too.