Pros and Cons of Using AI to Improve Road Safety 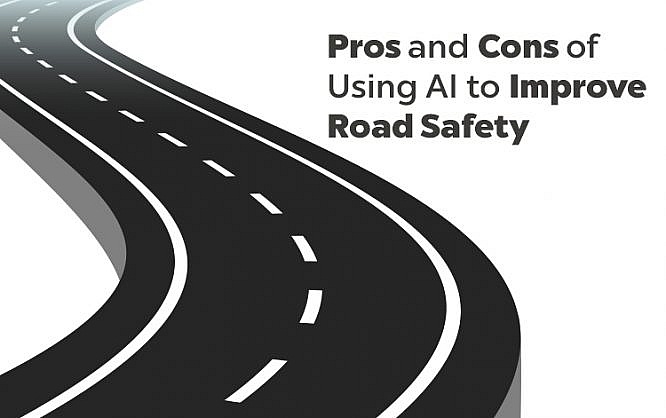 Did you know that roads are deadlier than wars?

Throughout the entire 20th century, a period when the First and Second World Wars took place, the generally accepted death toll stemming from political conflicts was 108 million. However, around 1.35 million individuals lose their lives as a result of a road traffic accident every year, according to the World Health Organization.

Although one could argue that the fatalities on the roads are accidental and those in the battlefields are intentional, the statistics do not lie - we are likelier to get hit by a vehicle driven by a civilian than a bullet coming from a gun barrel of a state enemy.

This notion is true even in the United States, which is a high-profile target of terrorists. From 1995 to 2016, terrorism claimed the lives of just 3,277 persons in the US. But our friends at PolicyAdvice discovered that car collisions cut about 40,000 Americans off in their prime in 2018 alone.

Yet, some of us are more afraid of sitting next to a racially profiled “terrorist” than crossing an intersection.

Fortunately, road safety improvement has been getting into the consciousness of the general public of late. One of the things to thank for is the rapid advancement of artificial intelligence (AI).

After decades of receiving generous R&D funding, AI has matured and become commercially viable enough to inspire wide-scale adoption in many industries, including transportation.

Can this technology feasibly make our roads way safer? If so, how? The jury is still out on whether AI is truly the lifesaver it is billed as. But the world remains somewhat divided over its utility in road safety since it has its own share of merits and flaws.

The Pros of AI in Road Safety

Driver error is the number one cause of road traffic crashes. It should not come as a surprise, for humans are too stubborn not to drive while distracted, intoxicated, high, or drowsy.

The obvious solution to such risky driver behavior is to pass the steering wheel to something incapable of getting distracted, intoxicated, high, and drowsy while driving the way humans do. Hence the need for vehicle autonomy.

Some technologists think that we are still decades away from seeing Level-5 autonomous vehicles (AVs) on the roads, but the tech has already been aiding motorists via advanced driver assistance system.

The ultimate goal of AV developers, however, is to put AI in the driver’s seat from the get-go. On paper, it makes total sense because computers can be better drivers than experienced human drivers themselves.

Self-driving vehicles are equipped with cutting-edge cameras, sensors, and radars to perceive the surroundings and other road users in order to predict the unpredictable in ways we can never do with our limited and inferior senses.

These futuristic cars and trucks also react to hazards more quickly. In addition, vehicle-to-vehicle communication could let them exchange information instantaneously and warn one another about nearby dangers.

AI-powered vehicles may run on gas and/or electricity, but they are fueled by data. Intelligent cars and trucks constantly gather information that can produce actionable insights with proper analytics.

Transport interests can use such findings to detect which stretches of roads are inherently dangerous due to one reason or another in order to plan safer routes for drivers.

AI and big data analytics can help the authorities control the flow of vehicular traffic in different areas. Traffic managers will be able to make informed decisions to prevent congestion in urban locations or at least minimize gridlocks during rush hour. That said, they would serve public transport commuters more efficiently.

Some vehicle models use AI to better address emergencies. The tech gave birth to auto features that can detect health conditions like a heart attack, request for medical services, and give relevant parties key details like vehicle location. Such capabilities are particularly useful for truck drivers who work at night.

Using AI, along with other innovations like facial recognition tech, fleet managers can monitor driver performance in real time. This luxury not only enables decision-makers to dispatch relief drivers accordingly but also uncover bad driver habits. The availability of such data allows transport companies to provide proper training to certain drivers.

The Cons of AI in Road Safety

AVs have the potential to save lives. But it would be naïve to think that they will never scratch or kill someone at some point. In fact, they already did.

So when it is impossible to save all potential casualties in a crash, who should decide who gets to live or who gets hit?

Are humans always more precious than animals? Is the life of a child more important than those of commuters riding a bus? Should productive adults be prioritized over old people? Should an AV swerve into the path of pedestrians to avoid a speeding motorcycle and protect its own passengers? If someone gets injured or dies, who should be held accountable for the behavior of a self-driving vehicle?

These ethical questions must be discussed by automotive industry leaders and maybe policymakers too. However, the software of AVs is designed to make judgment calls in life-threatening situations, and it is not going to please everybody.

Getting Exposed to Cyberattacks

Connected vehicles can be hacked, so cybersecurity is a serious concern. Anyone capable of hijacking the system of any specific AI-powered vehicle might choose to do so, irrespective of motivation. Such an incident could start a media frenzy and cause intense social panic.

The adoption of an AI-driven system for traffic management at any level could require enormous funds. For this reason, countries and communities with fewer resources might not be able to embrace such solutions as quickly as wealthier ones could. Without the necessary infrastructure in place, the tech can’t do much for road users.

AI definitely has a place in future road safety. Many of its use cases in transportation are already being tested, if not implemented. We may not be able to anticipate the full extent of its impact on society in the long run, but the best we could do is to develop it with foresight in hopes of successfully solving our pressing problems with road safety without creating new ones we could not effectively remedy.

Andriana is proud to call herself Community Manager at PolicyAdvice.net. Prior to joining them, she worked at a similar position at several different sites, both in the tech and digital marketing niches. When she’s not working, Andriana likes to go for walks with her two pet dachshunds and binge-watch documentaries, usually not at the same time.