18
SHARES
ShareTweetLinkedin
It's been really popular lately for many professionals to dismiss the use of Flash. Many designers and developers push the idea to discontinue use of the almost 20 year old technology. There are a range of what seems to be problems from the heaviness of Flash projects, the inability to frequently update without tearing everything apart and the difficulty in creating a Flash website with great search engine optimization. In the meantime, designers and developers are looking towards different technology such as JavaScript, Ajax, Silverlight, HTML5 and CSS3. Many of these technologies are actually wonderful alternatives as they are lighter than Flash and make it a bit easier to work around, as well as many are free and open source technologies. You also have the mobile device argument--where many devices don't make Flash available on most browsers. However, dismissing the use of Flash is extremely premature.

Flash is still a necessary and great technology to use. Flash can really push the idea of your graphics forward and help come up with a great level of interactivity for audiences. Below is a list of some really great websites to look at, use and understand how useful Flash really is. 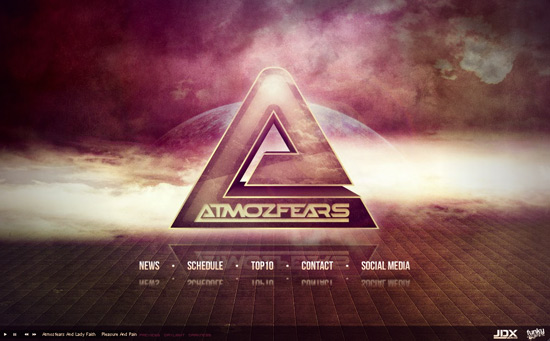 This website exemplifies how you can take a pretty good graphic and make it the centerpiece of an outstanding website. The interaction is much further than that of any other relevant technology without losing an audience. 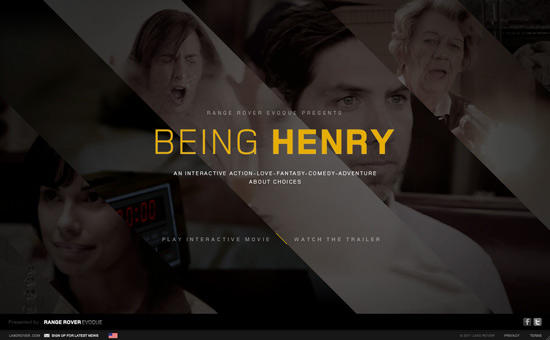 This is an extremely interesting and progressive concept. It's a movie, that allows you to choose your story line. This is an amazing idea, because there are books similar to this made popular for children! The use of Flash takes this type of interaction to a new level. 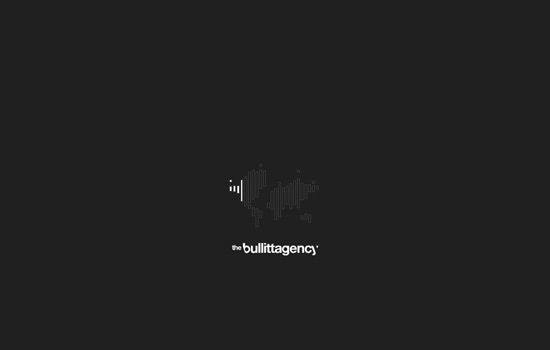 Flash is used here to captivate and draw in the audience. It was also used as a great way to showcase some amazing graphics and ideas. The interface is super easy to understand and makes for an overall great website. 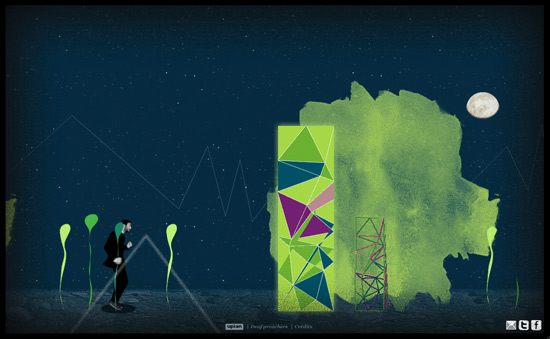 Musicians have always got to find a way to stand out from the pack and really make themselves noticeable. This website serves as an interactive music video for the artist. This is a GREAT way to get folks interested in their music as well as their brand. 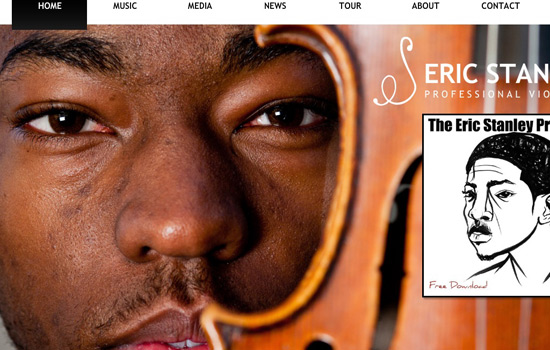 Eric Stanley's website is a typical showcase of his musicianship and artistry, however, it is taken up to that WOW factor with the use of Flash. This site focuses on good design with the special touch used via Flash. 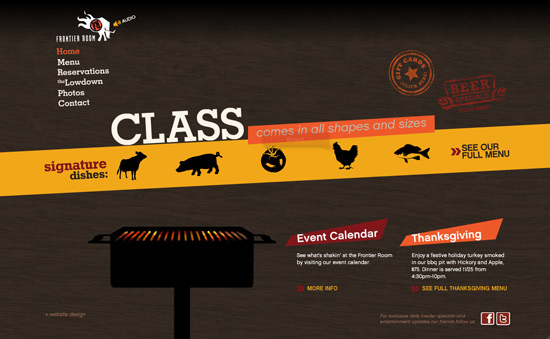 Another example of how Flash can take a regular idea (like a restaurant website) and turn it into something with a ton of character. From the loading screens to other elements, it definitely stays true to it's character and adds a bit of humor to their site. (Go to the reservations page to get a laugh out of the moo cow). 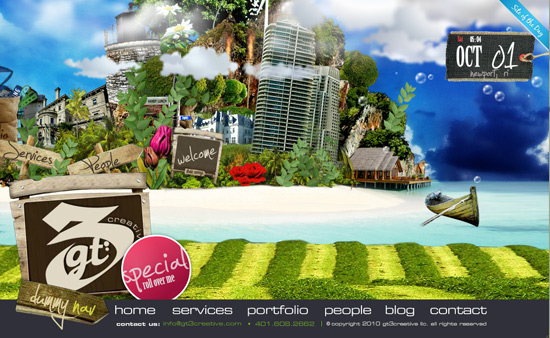 The great thing about Flash is that there are little to no limits when we are talking about graphics. GT3 Creative did a superb job creating their own little interactive island for potential clients. They claim to be a creative company, why not be as creative as possible?

Nothing Compares to Havana 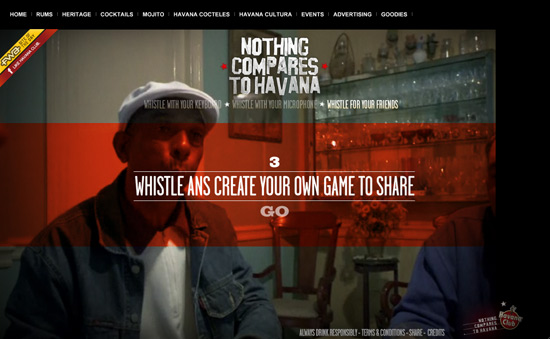 Aside from that blatant typo, this is another extremely interesting, progressive and interactive website. We had to see it to believe, but basically the site can connect to your microphone, and if you whistle you can navigate throughout the website. Pretty neat for those who can whistle. 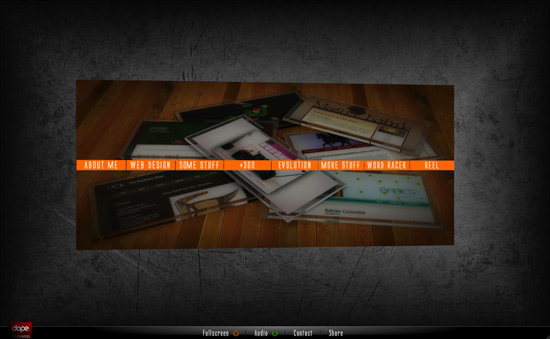 It's getting harder and harder to create a stand out portfolio that gets the attention of potential clients. So, instead of creating a simple website, Ivan decided to make his have a 3D navigational system. This is a simple, yet very effective use of Flash. 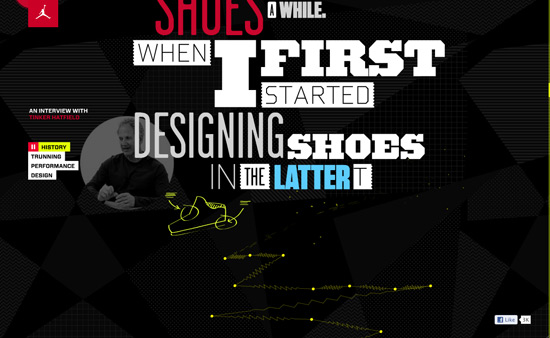 There are times when we visit websites just to get a bit of background history on a product and most times when you do that, you get a blurb on how amazing the company is and why the product rocks. Well, in this circumstance, Flash gets us a visually appealing interview on one of the most purchased shoes ever. 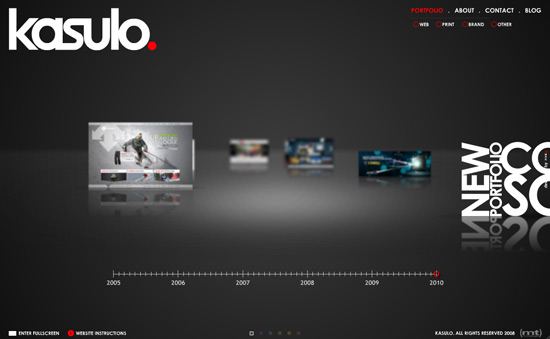 This is another great example of taking things to higher levels. The design is very good and the interface let's you travel throughout the timeline of this portfolio. This is another forward-thinking idea. 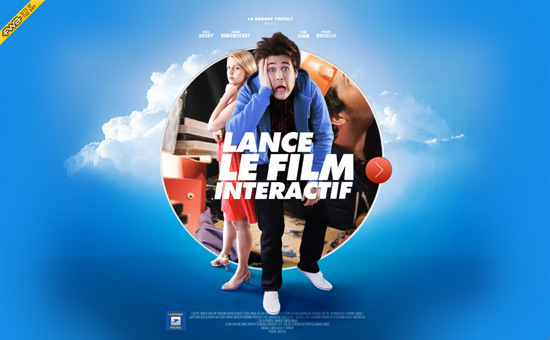 While we aren't French buffs, we can assume this is another one of those super neat interactive films. However, this site is a bit more graphical and Flash heavy than the former--and simply amazing. Sites like this really draw viewers in. 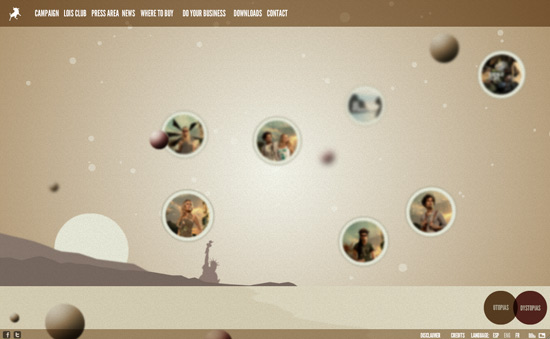 Another great example of crazy good graphics and stellar interactivity. This site is a bit simpler in it's graphic department, but the Flash is what gives it it's character. The interaction the mouse has with the entire site also contributes to this design.

I Make My Case 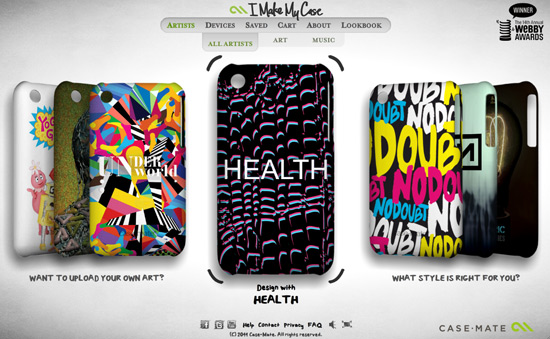 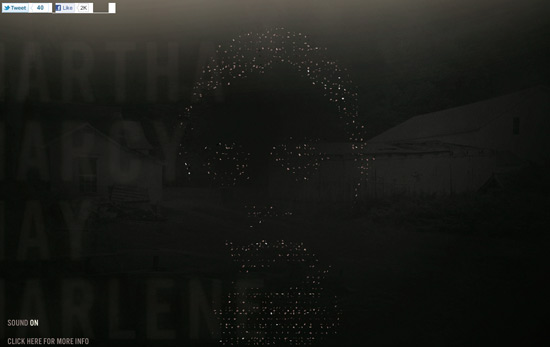 This is the website for a movie that really gets you involved and drawn in to the concept. Many times, folks say you shouldn't use a Flash type of intro, but it really gets you more and more interested in this film, much like an extended, super awesome trailer. Did we mention that it's interactive? 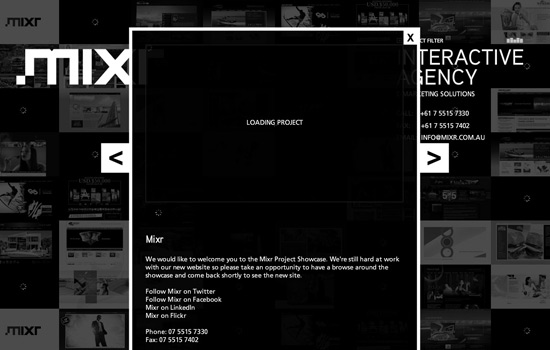 This is another great portfolio type of site that allows you two different ways to navigate through their featured projects. The use of Flash shines up the presentation a bit and makes this site fairly intuitive.

Music Can Be Fun 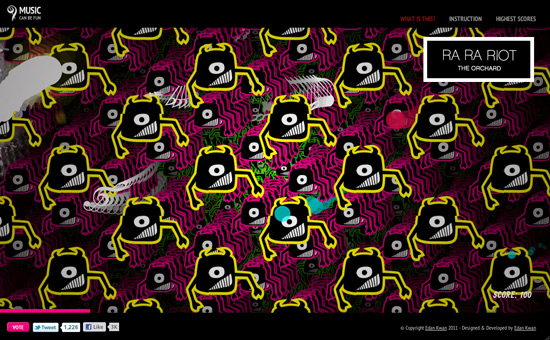 One of the most popular and probably most employed uses of Flash is to make games folks can play in their past time. Most games however don't pay a ton of attention to precise graphics, like this extremely addictive game. 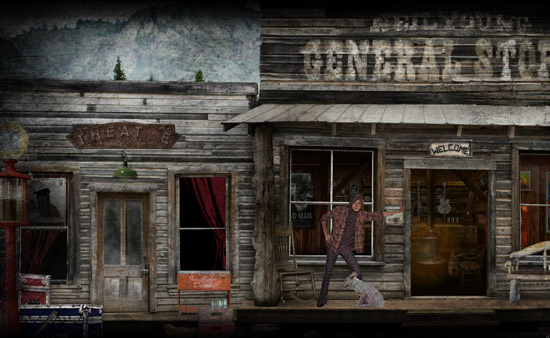 Neil Young is a pretty famous musician who is characterized by his ability to use personal lyrics and make you feel like he's holding a conversation with you through music. His store and website here almost attempt to do the same by inviting into a place in which he may have really resided or frequented. 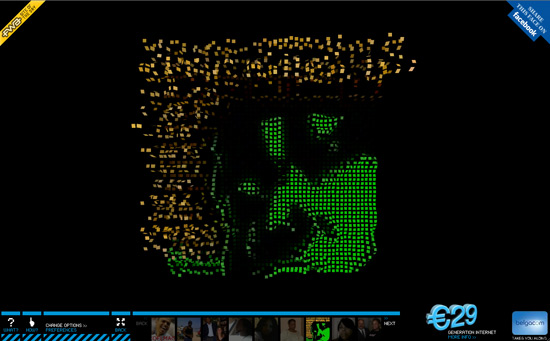 This seems to be an application that will convert you and your Facebook friend's profile pictures into a three-dimensional presentation. It's a pretty neat app that shows how Flash has the ability to interact with other entities on the web and come up with some pretty neat stuff. 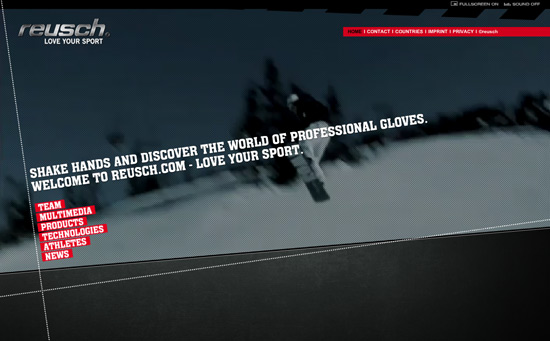 There's something about video that can get people interested in something more so than a bunch of different pictures. This site uses Flash to backdrop a handful of great athletes who use their product. 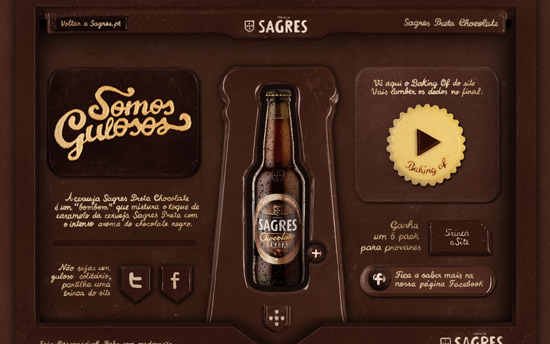 This entire site is composed of pictures taken of the actual chocolate and hand drawn icons and typography. This website is completely thorough and goes to a higher level of branding and being consistent. See how it was made. 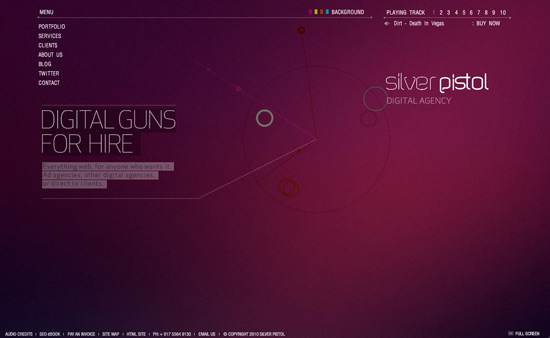 Graphics can really make or break a site, but  great graphics with great user interface always wins. This website shows off the best of both worlds and uses Flash as a means to spice it up and give a little atmosphere/character with their audio choice. 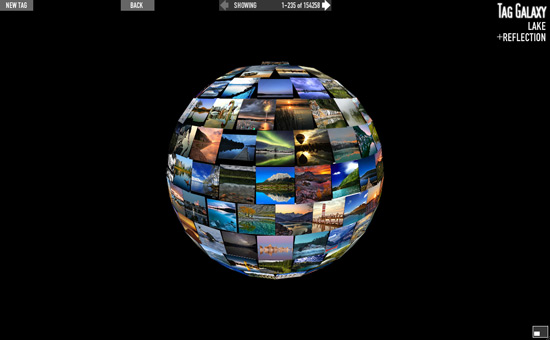 Much like 'The Profiler' site, this one connects to Flickr via tags and brings up whatever pictures you are looking for. This is a very useful site for designers that puts things together in a very visual and understandable way. 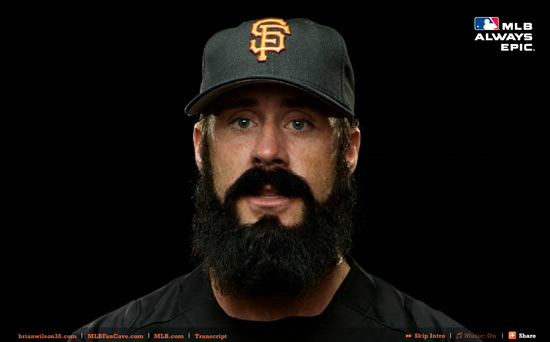 One word: HILARIOUS. If you don't know about this guy, he's an American baseball player with an out of control beard and personality. What better way to make a baseball website than to feature him and an interactive beard?

The Place To Be 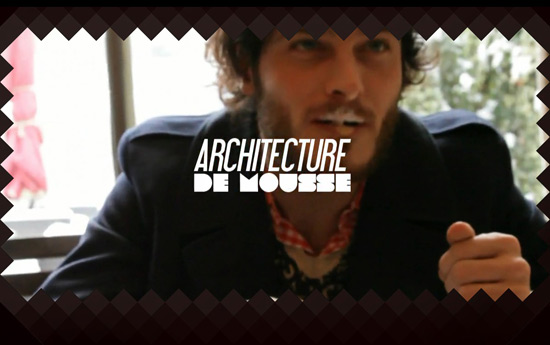 Once again, this is an example of using Flash to take what could be a pretty regular site into an amazing web experience. This travel photography type of blog is taken to new heights with it's graphic design and it's interactivity. 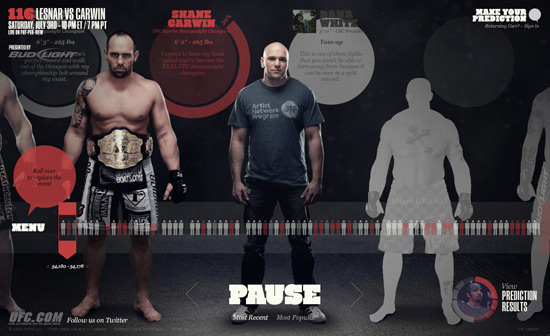 The UFC put together this site to help promote a past wrestling event, one that claimed to be the largest in their history. Fortunately for us, we can judge accordingly by looking at all the wrestlers and vote on what we feel will happen. This is a very well put together site. 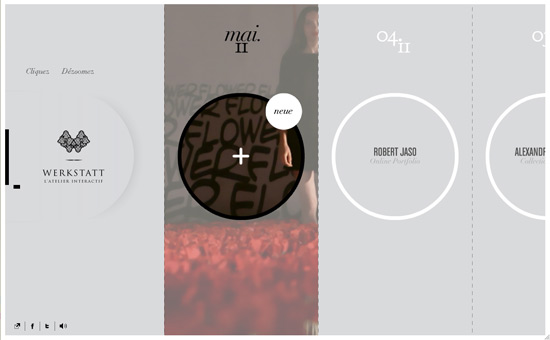 This example is another great and creative way to showcase a wonderful portfolio website. Instead of creating a nice grid type of view, this site intuitively scrolls side to side to allow you to see this artists work. On this site, Flash adds the extra creativity.

People are really interested in killing Flash and being the firsts to really declare that this technology is no more; but as we can see there are many websites that still use it (and it's still extremely popular overseas). Flash isn't going anywhere mainly because it's 20 years worth of technology that we don't want to flush down the drain. Though there are a ton of alternatives, Flash can do almost anything with it's ActionScripting and being paired with some good XML. The second reason Flash isn't going anywhere is because of the level of interactivity that Flash can bring to the table. Sooner or later social networks won't be enough; text messaging and watching video's won't be enough; everyone will want more interactivity. They will want a better way to look at the people they are connecting with and the companies they are purchasing from. And quite frankly, there aren't many other relevant technologies that can do it like Adobe Flash, and be so multifaceted. So, let's go back to embracing GREAT Flash developments and being awesome innovators. Design can only take you so far, but interactivity and connections can take you so much further. (rb)
18
SHARES
ShareTweetLinkedin

Kendra Gaines is a young freelance designer for Norfolk, VA. Visit her online portfolio at www.TheGainesCollective.com and follow her on twitter @TheGainesColl.