Websites don’t exist forever. Through the years I have seen a number of websites that continuously grew bigger and more popular, while others started to decay. Today, the latter are not relevant anymore. Several blogs I have read haven’t been provided with fresh articles for years. This is the natural evolution of the web. Owners of websites are quick to abandon websites that are not cost-effective any more, or simply as they want to or have to invest their time in other projects. Personal aspects also influence whether a website is continued or not. Think of factors such as work, children, marriage. Moreover, websites are again and again bought by big corporations, which in the aftermath more often than not only provide the bare necessities to keep them alive. 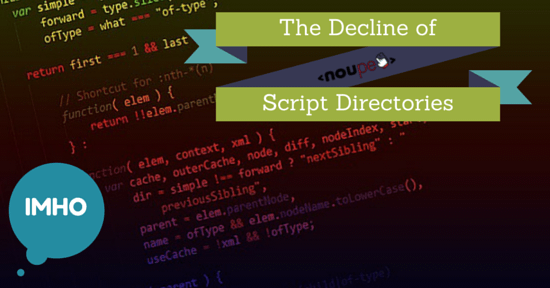 If a website is no longer properly maintained, its traffic naturally collapses. At the same time, it can be painful to watch a once proud website fade to grey. A specific type of website whose slow decline over the last 10 years I have witnessed are the formerly popular so-called script directories.

This one here was once a very well-known service:

The Decline of HotScripts

HotScripts already exists since 1998, and i have used the directory since about the middle of 2000. It was by far the most popular script directory for web designers and owners of websites at the time. Hardly a day went by without someone being directed from some forum to HotScript to get a script, as all scripts and important software were listed there. 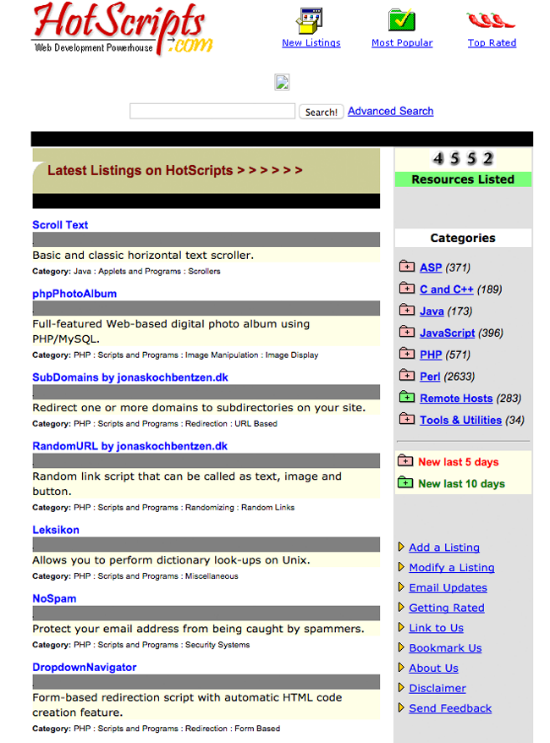 HotScripts in the early years around 2000

The first thing that struck me today, when I visited the site again, were the statistics of BuySellAds.com. I was surprised to see that HotScripts only generates 140,000 page impressions a month and only 25,000 page impressions on its front page. Those who have actively created websites for the last 10 or 15 years might know that HotScripts once used to be one of the most frequented high-profile websites the web development industry had. 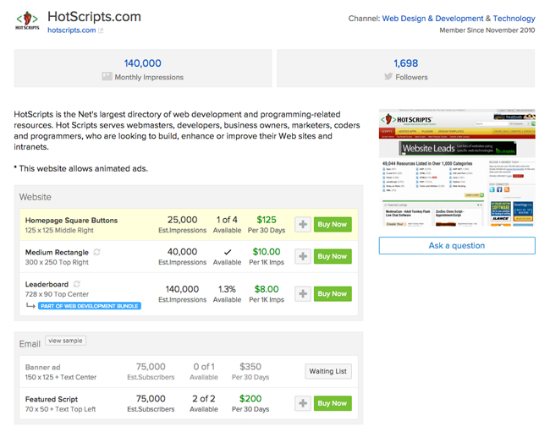 What Caused the Decline of HotScripts?

My first idea was that the owner of the website iNet Interactive, which bought HotScripts a few years ago, did not grant it enough priority. Perhaps you do not know iNet by its name, but you will likely recognize some of its business segments such as the web development fora Web Hosting Talk, dbforums and A Best Web. iNET also owns some communities, such as Overclockers and Mac Forums.

iNet is known for snapping up big websites and I believe that they also incorporate small websites with high potential.

Is iNet responsible for HotScript’s loss of importance? Yes. And No. They certainly have to take part of the blame, as design, underlying idea and structure have not been adjusted in the last few years. There has been no continuous development. The website simply looks outdated. This criticism applies to most directory websites, as those who don’t move with the times are removed by time.

However, I believe that web development today simply works completely differently from how it did 10 years ago. That is likely another reason why HotScripts is not popular anymore and lost its relevance. In the past, one tried dozens of scripts, and websites were built with many different content management systems, forum scripts, chat application scripts, this and that scripts etc.

Today, web development takes a completely different route. Since jQuery, almost any Web developer can create his own applications fairly easily, or otherwise just google an all-around solution. Especially the triumph of WordPress has changed everything. People do not look for scripts for specific applications, but go to the plug-in directory of WordPress.org to download one or several suitable plug-ins. If the design does not appeal anymore, a new theme is quickly installed or even developed by hand, as this is no longer a big hurdle for people with knowledge regarding HTML, CSS and PHP.

I do know that these are the reasons, why even I have not used HotScripts for a long time.

In general, script directories which offer tools and information are still quite useful. One can find thousands of fantastic handy code snippets on HotScripts, as well as many informative tutorials. They simply are not as relevant as they were 10 years ago. Today, people experiment much less with some kind of standalone script.

Back in the days, web design was pretty strenuous. One had to cobble a homogeneous looking website together out of a myriad of components and hope that in the end everything would run as smooth as possible. Today, good web design – especially for WordPress – has not really become easier, but at least more homogeneous. Thankfully, I still have fun developing a website from scratch.

I would love to read comments from those of you who have already developed websites for 10 years or more. Did you use script directories like HotScripts frequently while you worked? Do you still do that? What has replaced that service for you?

Ioanni Mitsakis is front-end developer at a major European automotive supplier and responsible for the look & feel of their internal cloud-based apps. As his employer works internationally with distributed teams world-wide, a rock-solid development foundation is what Ioanni aims for. He better should ;-)
Home » The Decline of Script Directories: Modern Times Dinosaurs [IMHO]