Don't tell me, I know. I know that the following infographic is titled "The Impact Of Twitter On Brands". But I cannot see this point. What promoted tweets, promoted trends and what else might be coming in future days really do, is leave their marks on Twitter. And I'm not sure whether this is for the better or for the worse. I tend to the latter. Anyway, let's have a look... 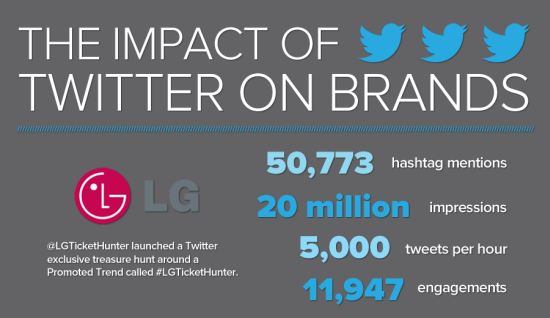 Buy Me A Tweet, Or Better, Buy Me A Whole Trend!

Credits, where credits due: Nick Steeves, marketing director at online marketing resource Wishpond took to the best practices section over at Twitter Business and put together the results of some, few of the listed examples. Twitter Business does a good job in telling success stories. A lot of big companies have already gotten convinced that promoted tweets and trends are a valid marketing tool.

So Nick took five of the available fifty-one examples to draft out an infographic that is supposed to show Twitter as a great tool for raising brand awareness, heightening the number of followers and what else business-people tend to take seriously important. I don't know why he did not dig deeper into the example portfolio. He need not have feared that he could find less successful stories in there. Hey, that's Twitter's Best Practice Collection. What would you expect?

Anyway, Nick chose to stick with less than 10 percent of the available examples. Still, these might be sufficient to convince potential customer prey to online marketing companies. Personally I'm not very much into this business-speak. "Increase in positive brand sentiment" and alike statements make me shiver.

Anyway, Nick Steeves manages to make clear that tweets and trends companies pay Twitter to promote into the streams of their user-base pay back. I myself have not once clicked on a promoted tweet nor trend but seemingly lots of people do. And they not only click, they retweet, they hashtag, the whole spectrum gets worked through.

The Demise of Online Credibility or the Best Idea Since Canned Beer?

What Twitter users who are not into getting spammed by tweets they haven't asked for or being notified of so-called trends that actually would be nothing without a payment from one company or another can only hope for is, that evangelists such as Nick Steeves don't get too successful in what they do. And more so, we should hope that promoted tweets and trends will always have to be marked as such. Imagine a Twitter where every second tweet is promoted while you cannot even tell the promoted from the organic.

Probably I'm too timid, but looking back at the last twenty years, I can't avoid to state that information has become more and more corrupted. It has become harder to differentiate fact from fiction and products such as promoted tweets and trends will not help make the world a better place in this regard. Hey, brainwave: How about "Promoted Truth"? I'm sure this would be a sales hit of epic dimensions. Need a slogan to support it? How about this one: "This changes everything!" What? Already taken? Think again...

Here comes the infographic by Wishpond. Clicking on it leads you to the original source over at Wishpond's blog:

Home » My2Cents: The Impact Of Brands On Twitter [Infographic]