Why Dribbble is One Big Circlejerk for Designers!

138
SHARES
ShareTweetLinkedin
In art school there were always those dreaded moments of putting one’s work up in front of the class for all to spill out their bile and personal problems on some classmate they hated for their talent, or life. It was something no one liked doing, mainly because it gave a voice to anyone whose mommy and daddy agreed to pony up the tuition for their strange little darling, and that opinion was unwanted, unneeded, and unwarranted. I asked one teacher why these group critiques were important when everyone had a completely different opinion, and none were right… or wrong, to be fair. He smiled and said, “Who cares what these little shites think? It’s all about you learning to listen to idiots and defend what you’ve created!” 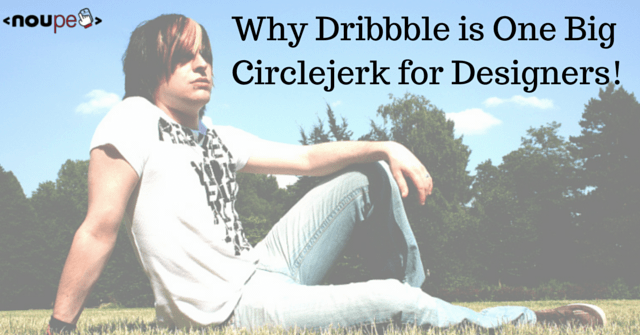 He had said that loud enough for the entire class to hear and there were actually some students who broke down in tears. Later the teacher pulled me aside and asked why I never responded to any of the critiques of my work. I told him I listened to hear if there were any good ideas and ignored the bad ones. I went over the roster of classmates and labelled each student as to why they were not worthy of any negative feelings or attention. Many of them were destined to fail at being creatives. So why get upset? He laughed and agreed. There were more tears from those who overheard me. The fact is, about half of that class never did enter the creative field. Some of them were very talented. They just didn’t have any confidence in their abilities.

Over Half of the U.S.Population are Idiots!

When dealing with criticism, keep in mind there are a lot of morons out there. The last midterm elections of Tea Party Republicans may be witness to that fact. The creative field is no different, if we want to be honest with ourselves, or are all creatives sweet angels and Einsteins? Add the internet, where anyone and everyone can have their voice heard, be it Aryan Nations websites, cooking tips with Fluffernutter, or home remedies that cause more childhood poisonings than… Fluffernutters. And there are a lot of false people who love to comment on everyone else’s work when they aren’t able or willing to actually do any design work themselves. So why do so many designers put their work in front of strangers and plead for opinions? Think about sites like Dribble, just as an example of what critics have labelled a “show-and-tell-site.” Proponents have said it’s a community of designers coming together to help each other and mentor, teach and learn while making valuable contacts. Having been involved in creative organizations such as AIGA and the Graphic Artists Guild, (and there were more!), I can’t stop laughing about that description. Get a bunch of creatives together, and you have anything but harmony, love and understanding. Personally, I wouldn’t mind having the knife concession at the next HOW conference for all the back-stabbing that goes on. Who are the players who feel they can’t make sound design decisions? What did art school not teach these people about their future as professional designers? Who are the people who have the time to spend throwing out their opinion about design? Detractors ask those questions and although education and creative thought and evolution are always an ongoing part of a great designer is important, well, internet advice, so willingly given when successful designers are stressing about making deadlines for work and living as crazy a life as do we all. Perhaps they have the time because work doesn’t fill their days? I’ve been told by some designers who prefer tweeting design-targeted content to other designers, rather than targeting prospective business clients, that they hope to become well-known to design firms that will hire them for freelance work or having the “design sense” to tweet quality design-centric content. Has that ever worked for anyone? Sure the desire for notoriety is something that doesn’t belong in our industry… but it does. Oddly, without a PR firm that some may hire to push their name, fame is illusive to designers when it comes to the general public and history books, except for one, basic fact: People will remember, save and even worship what we create. Packages, websites, 3D items, magazines, etc., will be favorite items of millions, but they will never know, or care to know who designed it. A simple joy I had when working for a greeting card company was going into a store and seeing there was only one card I designed left in the pocket. It meant people liked it. That was enough for me. People also retweet my articles and odd tweets. What more did I need?

When you looked for an art school you thought would help hone and launch your talents, what requirements did you have? Are those standards any less now than they were back then? So, are faceless people on the internet the people you trust with your self-esteem and professional decisions or design advice you might follow but not know how to defend to a client? Remember my teacher’s advice? You have to learn to defend YOUR design decisions! If you create a design and feel it’s the wrong solution, or you second guess your design decisions, well, welcome to being a designer! Perhaps the best advice I’ve ever heard comes from the host and producer of the radio and television show This American Life, Ira Glass’ video: Is it you want to be better but doubt you can? Of all the portfolio reviews I’ve done, very few designers have been totally confident about their work. Some sheepishly explain why they aren’t happy, and some get nasty and attack any criticism. Even online, requests to look at a portfolio can make you yet another enemy. It’s like that female friend of yours who posts a new Facebook profile image and all of her friends tells her how beautiful she is. You know she’s not beautiful and her friends are being nurturing and lovingly supportive… just before they think to themselves what a gargoyle she truly is. Asking what people think of your work will bring mostly lies, misinformed opinions or truthful insights that will most probably upset you to no end and cause you to strike out at the commenter, rather than listening for the hints of what may truly be helpful advice. What would that female friend think if you said she wore too much eyeliner or should rethink her hairstyle? She would be hurt and delete you from her friends connections. Your opinion may be valid, but she doesn’t really want to hear it. She wants loving praise of her hideousness. When you see someone posting a request to look at their portfolio, be prepared to say how great it is, because that’s what people really want to hear. Those who defend show-and-tell still believe that’s what they will get and can’t handle or don’t want to be told they are less than perfect.

What’s your real desire for your career? Fame? Fortune? Being happy you do what you love? If the latter is what you really want, then fortune will probably follow, but “fortune” means different things to different people. To some it’s money and to others doing what you love to do is the grand reward. So, does exposure via tweets or Dribbble, or any other community site, that is only for one’s peers, bring fame? Is being the smartest kid on the short bus something worth time and effort? I’ve told and retold the story of a local designer who spent all day filling in sell sheet templates for real estate agents and making an extremely large salary. He had a beautiful home, cars and paid into two college funds for his kids. They took vacations and as he was freelance, he had some flexibility in his life. He was miserable. It seems he was so concerned about being a “legitimate designer” that he was being torn apart inside. Why did he feel this way? Other designers convinced him his work wasn’t worthy of him being called a designer (he designed the templates he used). These designers could never keep a job, lived with their parents (at an embarrassing age), and never really seemed to do any designs. You will not be famous to the world unless your name is attached to a product, or you create a unique brand. Those are few and far between if you think of examples of any successful niche. Can you handle that? Work that you love but not being famous? Can you handle not trying to compete with other designers for attention? How much time do you spend competing with other designers for a bit of the spotlight? Is it in your social media? Do you belong to several design groups but no business networking groups? Do you expend negative energy on jealousy or sully your personal or professional reputation by bad mouthing other designers? Is that how you want to run your professional career?

Why Do We Elevate Other Designers But Not Ourselves?

Why are we so starstruck by the work of other designers and does that make them better than us? Is a design for Apple a “better” design than one done for a school bake sale poster? Yes? Says who? Not every designer can or chooses to work for Apple. Design serves a client and a purpose. That purpose is to sell the client’s products and services. As designers, we appreciate beautiful images but we seldom see the purpose of design communicating along many different lines and to many different people. Perhaps that's why we second guess ourselves so much. If you’ve ever posted a piece of your work on Dribbble, Behance or Deviant Art, you know full and well that you will get at least a dozen conflicting opinions. It’s the same thing you face in a corporate committee. People love to hear their own voices but don’t pay attention to what they’re saying. Many of them have no idea what they are actually saying, much less what they are looking at. Those that are dependant on the opinions of others will never be able to hear their own voice, much less be able to put their own voice in their own designs. In the end, what comes from within ourselves, learning from those happy mistakes like learning an unknown Photoshop function or screw up a layer and find a wonderful technique that excites you and drives you forward toward confident design decisions. It takes time, experimentation, experience and knowledge. You also have to be able to tell certain people to keep their opinions to themselves. (dpe)
138
SHARES
ShareTweetLinkedin

Home » Why Dribbble is One Big Circlejerk for Designers!