The Billion Dollar Startups – Rare, But There [Infographic]

Strange, but true. Even in these fast times, companies freshly evolve and make it to a market value of billions of Dollars in a mere few years time. The people from the job board Staff.com put together a nice infographic with all the basic facts worth knowing about the thirteen young companies that made it. But, before you go head over heels to open up your own startup, keep in mind, that market value does not necessarily correspond to real money. It is just the value using established calculations in the financial sector tells you a company has. To exchange that value into real life cash someone would need to be willing to shell out the money. Thus it is more interesting to look at the capital a startup raised during IPO. The infographic has that covered, too... 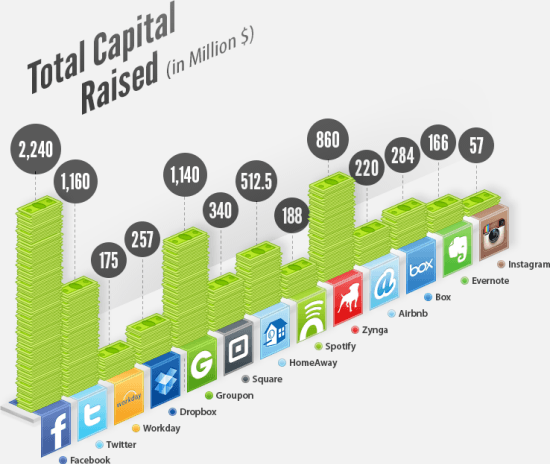 Don't worry. I will not bore you with explanations as to how market capitalization is calculated and where to look for the snares. Just know, that this value is not as hard a fact as your own account balance. To evaluate a company's financial power you would need to dig a lot deeper than looking at the numbers for market capitalization and capital raised as they are only indicators that should never be looked at alone.

That said, we still have an interesting infographic to offer. We see companies in ages from eight to two years that already are valued in amounts most people will never earn in their whole lifetime. Staff.com took Facebook as the oldest startup and looked from there up until today. Including the big blue social network they found thirteen companies with a market capitalization of more than or slightly under one billion Dollars.

Undisputed leader of the pack is Facebook with its 2.24 billions raised and 48 billions valued. All the twelve others combined to not even come near this value. Next up to Facebook is Twitter with an estimated value of 5.35 billions, while having raised 1.16 billions. All the others seem to more or less fall short in comparison. But as soon you take the number of employees into account things change again. Dropbox for example, only five years of age, is valued at 4 billion Dollars, a little above Groupon. Dropbox raised 257 million Dollars, while Groupon raised more than four times this amoun. But. Dropbox operates on 194 employees, Groupon on 10,000.

Missing are facts that show the other side, the dark side of expenses and liablities. Groupon is always high on expenses and higher on liabilities. A lot has been written about that. So, to round things up, be impressed by the following infographic, but don't lose your scepticism and always stay alert when it comes down to alleged financial facts.

Clicking on the graphic takes you to the source where you can find a larger variant for even easier readability.

Home » The Billion Dollar Startups – Rare, But There [Infographic]