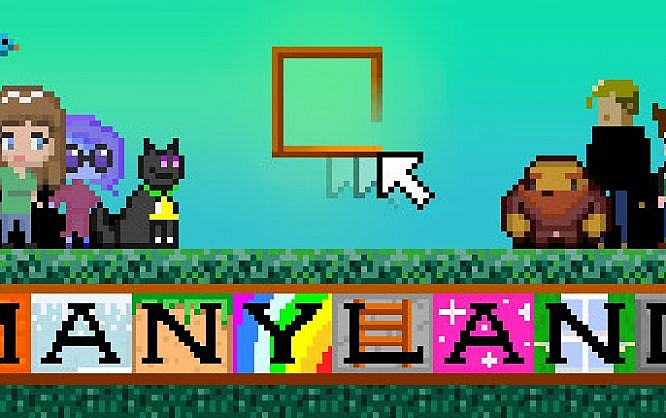 As like must of our readers, we have been stuck home in quarantine for the past weeks. Or is it months? It’s hard to tell. Anyway, we decided to use this spare time to find some games that are both fun and have design value. So, we looked for a game that induced creativity, was simple to play, and wasn’t too popular. After trying a couple of games, we weren’t sure if there was a game that would fit our expectations until we came across Manyland.

Manyland is a Sandbox Styled 2d MMO(Massive Multiplayer Online) game where players have their own avatars named Manyzens. The game consists of 2D worlds that are entirely created by the players. It has no unified story, rules, or any other predefined structures. People can create their own objects and can even create their own worlds. For a 2D world, the amount of freedom a player has and the ease of use of the drawing mechanics truly sets the game apart from its counterparts.

The game is really simple yet even without signing up, we spent around 8 hours just exploring what other people made, while there were some less-finished places after we went far and wide, there are some extremely interesting creations and worlds. During our journey, we went scuba diving, transformed into a mermaid, took a Star Wars space ship to fly, rode a dragon, chilled out in a Starbucks world, danced with bears, become a fox, and a lot more that was enough to get us hooked. We wanted to share our favorite moments in a short article so here are some highlights from our time in the many lands of Manyland, pun intended.

Manyland embraces creativity like no other game. Players can basically draw and create any type of object and add it to the game. As a result, the game is extremely vibrant ranging from references to other video games to fashion shops.

You start the game in the central hub in the main world where you’re much more likely to see other people. As the main world and thousands of other worlds are massive, you won’t run into a lot of people. From here you can start exploring by going left, right, up, and down. We decided to start by going left for no particular reason but as the game is massive, we had to restart the game a couple of times to explore what lays on the right, top, and down.

While we were still trying to register what is going around us, we found ourselves in a vibrant world that has creativity bursting from every corner.

We came across a field full of easter eggs and excited to explore what lays around, we started trying to interact with the environment. We were in for a surprise...

We were already taken aback by the amount of detail and work people had given to this game and the last thing we were expecting was to find entire worlds created by players.

We Found Starbucks in Manyland

Now that was unexpected. We found a Starbucks world in Manyland, and this was the first Starbucks we've been to in months. Later we found out that this world was one of the busiest ones in Manyland and served as a social hub for its players.

We came across many worlds in Manyland. The game really does live up to its name. One of them was a retrowave world where you are greeted with a link to a playlist you can listen to while exploring. It was one of our favorite places to explore.

We weren't quite about adding this one to our article but the idea is such a great one that we couldn't bring ourselves to exclude this one. In this world, there's literally one purpose and that is to lay back and chill in space. While the design seems a little weird it was truly great to find it.

A world full of trees and giant smoothies? Sign me up! First the Starbucks world and now this place. This isn't fair.

Wait, We Can Play Games in Manyland?

We didn't do our homework properly before jumping into Manyland. Exploring it at our own pace seemed like a good idea. Turns out it's possible to create games inside of Manyland. One of the worlds we came across was a game in itself. We didn't finish it as we had many other places to go.

Before we jump to our favorite world in Manyland, we wanted to sum up some of the more interesting worlds we came across. One of them was a factory world. We don't know the purpose or the reason why this world was created but it was there with all its greyness and details.

The other one was a giant mansion covering the entire world. We didn't stick for too long but we stayed long enough to realize it's beauty and massive size.

The Best for the Last; The Museum World of Manyland

When we started to look for a game like Manyland, the next world was exactly what we were looking for and it was the final piece that got us hooked to the game.

An entire world dedicated to displaying the artwork of the players? It doesn't get better than that. This entire world consists of artwork submitted by players and there are some really marvelous pieces. There aren't too many words to describe it. It's basically perfection.

Interacting With the World of Manyland

In Manyland, players can draw any type of block but they can also create pieces that other players can interact with as well. These include vehicles, items, and even outfits.

We figured that we can ride some vehicles, transform our characters, and equip items a little late but there were some great moments that we wanted to share.

A Mermaid On a Boat Wearing Diving Gear

That's exactly how we ended up after we discovered that we can equip items and change our looks. Our weird-looking default character was now a mermaid with diving gear equipped, riding a boat in a see biome.

We also went diving as a mermaid. Still kept the diving gear, though. It's better to be double safe.

In Manyland you can ride many different vehicles, including dragons. They are a little tricky to fly and sometimes there can be too many enclosed spaces to fly them but still, it's quite fun. Interestingly, while we were flying on the back of a dragon, our character was in the form of a green, neon dog.

Our favorite outfit was that of a pink fox. Look at him go!

We also got into a pretty cool looking exo-suit during our travels.

Some Other Highlights From Our Visit to Manyland

We visited a world that closely resembles the original Pokemon games. All of the Pokemon here are drawn by players.

We went to the cinemas but unfortunately, there wasn't anything playing. Probably because of the lockdown...

Rode a badass motorcycle but had to drop it shortly afterward because there wasn't enough open space to ride into the sunset.

A wonderful-looking tree close to the central hub of the game.

The giant pirate ship itself. Yarr!

Overall the multiple hours we spent in Manyland were quite remarkable. The game looks quite basic at first but, the depth and creativity of the game were way beyond our expectations. We didn't even get started to creating, drawing, and socializing in the game but what we saw was enough for us to get hooked. For the remainder of the quarantine period, we'll keep on playing and creating. The fact that the game has no rules, no story, no setting means that whatever we imagine can be made into reality. That idea itself is exciting enough.

While the game isn't as known as other similar titles, it's, in our opinion, the best one out there and we hope that it keeps attracting creative minds to it to make this already-vibrant world even more stunning. Its art like other games we've reviewed isn't created by the developers but the players themselves. We hope that you enjoyed our journey in Manyland as much as we did. If you think we missed any worlds that are worth mentioning in this article, drop us a comment. We'd be more than eager to explore and write about them.