It's surprising but true. You can't edit the file names of uploaded media from within WordPress. The only way to do so is to delete file by file and reupload them again after names were changed locally. Today, we'll change that.

Let's not fool ourselves. This happens very quickly in our hectic daily routine. The image that you just downloaded from Pixabay is now being uploaded into your WordPress with its original name. Or you made a mistake with a screenshot you just took, and now it's not called screenshot.jpg but screenshit.jpg instead. This is almost a bit embarrassing. Aside from the embarrassment, the image-related SEO is not to be neglected either. After all, you should include the chosen keyword in your file names to increase your chances of a better ranking. The right file name for your image is no accessory, but an essential part of the work on your website. WordPress is not very flexible in this regard. It does not allow you to access your file names once the element has been uploaded. All there's left to do is to delete the file, alter it locally, and reupload the modified version. At first, this seems doable. But what if you're responsible for the publishing in a multi-author blog, and you don't even have access to the original files? Sure, with a bit of effort, this can be changed, but wouldn't it be better if you could just modify the file name from within the Media Library?

Alright, I can already hear your outcry. "What about the links to the images? All of them will be wrong!" Yes, this is a problem. But the Serbian developer Milan Dinic has already taken care of it during the creation of his free plugin "Rename Media Files." The mechanics of the plugin are as easy as it gets because Milan has decided to simply add another field to the file detail view, which he labeled "New Filename." Here, he also informs you about the current file name of the chosen image, to prevent you from renaming images that you've renamed already. [caption id="attachment_100001" align="alignnone" width="768"] 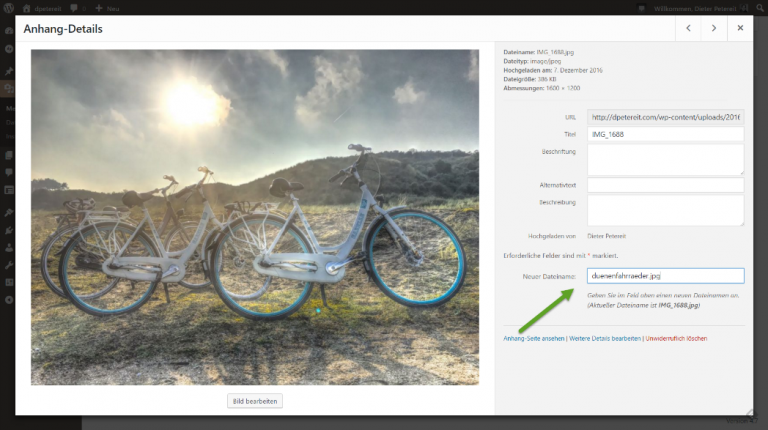 Rename Media Files Only Adds a Small Unremarkable Field. (Screenshot: Noupe Magazine[/caption] If the element you want to rename is an image, it won't just receive a new name. All required intermediate sizes are also newly generated reflecting the changed name. The plugin also alters the link to the file in all posts that have the element integrated. This removes the risk of forgetting or overlooking anything. Your files remain completely intact, even in older posts. While it's not typical to rename images that were already used in older posts, it is still possible with "Rename Media Files." It is more common that you need to rename something during the completion of a post. Everything is basically done, but then you notice the typo in the file name. Or you notice that the chosen keyword is not the optimal one after all. Fortunately, you won't have to newly upload and integrate all images. Instead, you only change the names.

"Rename Media Files" is a very focused WordPress plugin with one single job. But it does that job perfectly. For me, this small tool is indispensable. [appbox wordpress rename-media-files]
52
SHARES
ShareTweetLinkedin