WordPress vs. Concrete5 — A Comparative Review

230
SHARES
ShareTweetLinkedin
Some time ago we published a review of Concrete5, wherein we evaluated the usability prospects of the CMS as a stand-alone software to power your website. Carrying on from the review, in this article, we will compare Concrete5 to the world’s most popular CMS, WordPress. Wanna know how the two CMSs fare in comparison to each other? Read on!

WordPress and Concrete5: A Comparison

Just like my previous article comparing WordPress and MODX, in this one as well, I will stay aloof from discussing issues such as interface and layout. Reason? Well, if you have used either CMS for a good duration of time, you will find yourself accustomed to the interface and layout. Similarly, the very phrase ‘user friendly software’ is a subjective notion, and the definition of ‘user friendly’ differs from person to person. As a result, in order to conduct a free and fair comparison, I will be considering only certain specific playing grounds. *Image Source That said, how do WordPress and Concrete5 fare when pitched against each other? After all, WordPress has established itself as the de-facto standard when it comes to ranking CMSs in terms of popularity, and if any CMS were to dethrone WordPress from its apex position, I don’t think it would be Concrete5. On the other hand, Concrete5 surely has merits of its own, and in my personal experience, if I have to consider a CMS, no matter what the nature of the target website is, Concrete5 always finds itself shortlisted. Lastly, Concrete5 itself does not seem to be in love with WordPress.

Target Audience and User Base

Each time I compare two or more CMSs or Linux distros, the segment about target audience and user base sets the mood as well as the direction that the comparison goes on to take. This one will be no exception. What constitutes the primary user base for WordPress? Agreed, it is used by many big names, but at the end of the day, there are specific categories of users who turn to WP for powering their websites. I defined these categories in my WP and MODX comparative article as follows:

WordPress enjoys maximum usage amidst a particular section of users:

What about Concrete5? This is where the interesting part comes into effect: unlike MODX, Concrete5 manages to have a target audience which is eerily similar to that of WordPress. The average user of Concrete5 is not someone who wishes to have the customization prowess as offered by MODX. Instead, the average Concrete5 user is extremely similar to the average WP user: blogger, artist, magazine website creator, and so on. Of course, exception apart, that is. *Image Source Now, if both WP and Concrete5 have a more or less similar user base, how do we set one apart from the other? The difference lies not in the nature, but in the level. Your average WP user base includes a good section of folks who are absolute beginners (not just with CMSs but with web development/design in general): probably they’ve come from WP.com, or have been impressed by the ‘XYZ Themes for Your WP Website’ roundups). However, such users cannot be in majority -- argue all you want, this section is rather dynamic and volatile: beginner today, expert tomorrow. Concrete5 user base, on the other hand, tends to have distinct sections of users, ranging from mediocre level folks to absolute experts, and a generous sprinkle of newbies. However, a Concrete5 newbie is way different from a WordPress newbie: most likely, someone has already used WP for couple of years, and is now just playing around or experimenting with Concrete5 as a newbie. To put it differently, generally, a newbie is more likely to begin with WP and then move on to Concrete5 (not vice-versa). In easier words, Concrete5 user base is such that it can and does include migrants from WP. On the other hand, WordPress user base generally has permanent migrants from Joomla!, Drupal or Movable Type, but rarely from Concrete5. This brings me to my next point.

Let’s pause the CMS user base debate for a moment, and focus on the bigger picture. When we were comparing WordPress with MODX, the difference became manifest while talking about administration and security. However, between WordPress and Concrete5, the difference is not so direct and visible. In terms of administration, both the CMSs do a fairly even job of abstraction coupled with efficiency. Ever since the WordPress 3.5 update, I haven’t liked the new Media Manager a lot. Similarly, with the new releases of Concrete5, I’m not an ardent fan of the drag and drop functionality either. Yet, there are people on both sides of the fence who are happy with the respective features, and so there isn’t much for me to complain here. Similarly, in terms of security as well, Concrete5 has managed to steer close to WordPress. Trust me, pick any big or small topic: administration, security, target audience, update mechanism -- you will have a hard time claiming WordPress superior to Concrete5. In other words, Concrete5 exhibits an equally nifty level of abstraction and functionality as WordPress. Now, coming back to where we left the user base debate. Why do we not find multiple permanent migrants from Concrete5 to WordPress? The reason is mentioned above: unlike Joomla! and Drupal, Concrete5 has mastered the art of abstraction equally well as WordPress. Thus, the ‘easier to use’ missile in the WordPress arsenal rarely works against Concrete5 (yes, that very ‘easier to use’ missile which has almost put Joomla! and Movable Type out of business). What about other reasons? Security? Customization? Well, for such reasons, users generally hop on to MODX or Drupal (or even CMS Made Simple) and once again, Concrete5 rarely feels threatened by the WordPress empire.

Ah yes! I know... WordPress has an extraordinarily high number of plugins and themes, and this is where Concrete5 ends up starving! To a certain extent, in reference to themes, yes. Concrete5 has some themes/templates, both free and premium, in store. No debates about that. However, speaking of plugins, I’d like to differ. Let us be honest: plugins are generally used to save time and add a certain bit of functionality to the CMS (which, if added by means of coding, will take extra time). Now, let us take a simple example of the post editor. How do you extend the TinyMCE editor in WordPress? Yes, by using plugins, or coding. In Concrete5? Coding stays constant, but the plugin repository is comparatively small, so... what next? Not an issue; Concrete5 itself has managed to find a work-around for multiple features: you can tweak your post editor from the CMS itself, without installing further plugins (see screenshot below). Similarly, sitemap and RSS feeds are features that are provided within the CMS, not by means of plugins. This is how you combine abstraction with customization! 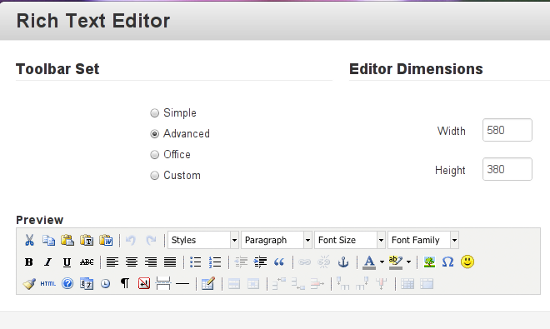 Will Concrete5, just like MODX, let me tweak the post editor and make it stronger than titanium? Nope. Will Concrete5 let me extend my post editor so that I can get more out of it, without messing with extensions and code? Definitely yes! Coming to community. WordPress 3.5 recently offered its users the ability to rate plugins and mark them as Favorites. Nice, isn’t it? Apparently, Concrete5 has been offering a remixed version of such community level involvement for over a year or so. You can have your own Concrete5 member account, and access the forums, chat groups and newsletters. Still, at the end of the day, the WordPress community has a larger number of users, and there are more developers actively creating stuff for WordPress. In terms of documentation, both CMSs are doing a wonderful job, but as of now, Concrete5 surely could use some more exposure on tech blogs and websites.

Pros Cons What are your thoughts? Do you prefer Concrete5 over WordPress or is it the other way round? Have your say in the comments! (dpe)
230
SHARES
ShareTweetLinkedin