With that many smartphones around, you definitely need an app. This is what many inexperienced people, also known as clients, think. However, even some experts recommend using native apps for redesigns, rather than a website. This article explains why that’s wrong.

Let’s first define the terms. When speaking of websites and apps, we mean a presence accessible on the web, and the native app as we know it from the world’s app stores. A web app, in that sense, would be a website with expanded functionalities. People Spend More and More Time on Their Mobile Devices

There are tons of studies on the topic of native app usage, supporting different points of view. Oftentimes, this only depends on how we read the results. Let’s take a look at the most striking examples.

In the current US Mobile App Report for 2017, the statistics company Comscore released numbers on the time users spend on their mobile devies. It turns out that mobile users spend 87 percent of their time in apps, and only 13 percent using mobile browsers on the web. This number has remained consistent for years, though it has been declining for mobile browsers over the past two years.

Well, this is a very obvious statement, is what your client may think. I need an app for my business. After all, this gives me a chance of 87:13 of me being noticed on mobile. This assumption is wrong.

If we look at the top 10 apps, it becomes obvious that this is not a rivalry between the open web and the app cosmos. The users simply use their devices differently. 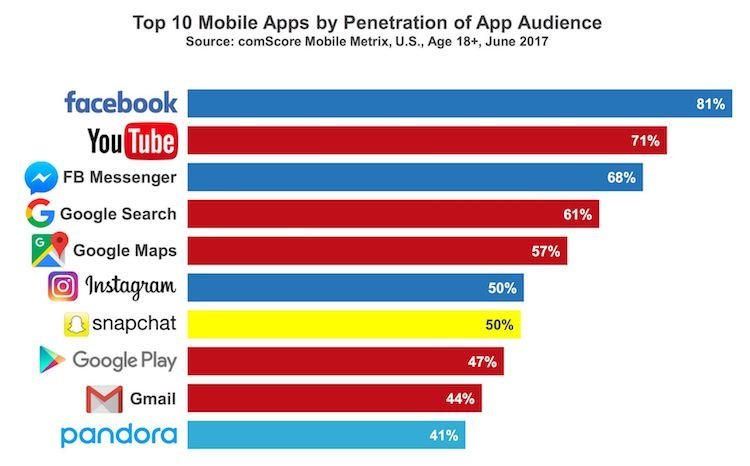 Here, it makes sense to take the Facebook app out of consideration, as it is nothing but an appified form of web usage. Facebook is by far the biggest digital presence of the planet. This can’t be considered a reference. The same goes for YouTube. Here, using the mobile site comes with no advantages. The app accesses the same content.

Noteworthy: eight of the ten most used apps either belong to Facebook or Google. Does your client have a chance to compete? The statistics are meant to be read like this, by the way: 81 percent of smartphone users use the Facebook app, and so forth.

Let’s use eMarketer to look at the usage areas of mobile app users. Most of them are mostly irrelevant on the stationary computer. The main reason for this being the very specific orientation of mobile apps towards mobile devices. Of course, I’d rather play a little game on my smartphone. After all, it has sensors to make playing more interesting, and I have it on me at all times. Of course, I’d rather use productivity apps like task managers, calendars, and so on on my smartphone, as they’re always accessible that way. Small utilities have only created their share via the availability of smartphones.

The gaming section has a solid share of 14,3 percent. However, they stand no chance against social networks and their share of 23,9 percent. Mobile video apps have a share of 18,7 percent. The number wasn’t on previous lists. Musically and Co have created a real boom. All of these application cases share the fact that they are destined for mobile devices.

To wrap this up, let’s take a look at a screenshot of today’s top apps in the Google Play Store: 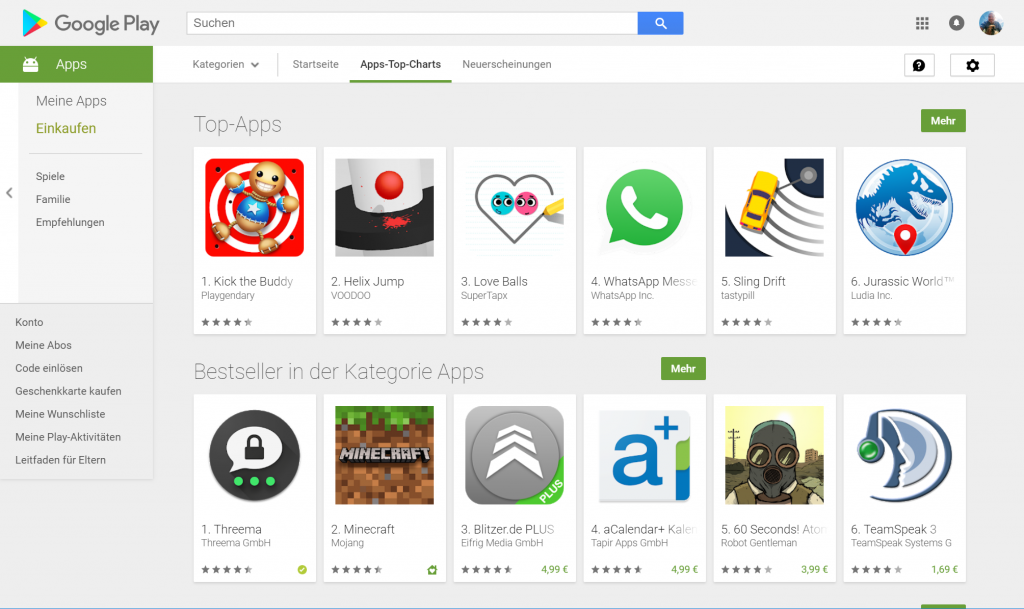 No app version of a website in sight. (Screenshot. D. Petereit)

What did you notice for both studies above, as well as the screenshot? Right, there is no large brand with an app that would cover the classic tasks of the existing website.

Apps are being used very selectively, and their application purpose has to be suitable for mobile usage. Pure information procurement on mobile devices only takes place in the form of the thirteen percent of mobile browser usage. Thus, it’s not worth it to create an app for that sole purpose. You’ll understand this if you ask yourself if you’ve ever searched for a restaurant, hairdresser, or IT service provider on the app store. Nope, you haven’t.

In 2014, the average smartphone user installed 8.8 apps a month. At that point in time, this number had barely changed in three years. More recent numbers from 2017 show that this value has dropped significantly. Only 49 percent of the surveyed users still install apps; 32 percent install between one and three apps a month.

Things get even worse if we take a look at Localystics, as they found out that the average Android app loses more than 71 percent of their active users within the first 90 days of usage. After only thirty days, the value is already at 57 percent. Here, you also have to consider the fact that this number is an average across all apps. Here, games improve the average. If we left them out, the loss rate would sit around 90 percent. There’s only one logical conclusion to draw from these numbers. Don’t offer an app to your clients, unless they are some of the few that fit into the profile described above.

Let’s take Snapchat as an example. Here, the app is the product. The website only points towards the download of the app. Of course, this business needs an app, as it pretty much is the app. But this won’t work for the average customer.

Mobile internet usage is still rising, though not as rapidly as it did in the first ten smartphone years. App usage, on the other hand, is declining. Thus, I don’t recommend suggesting an app to clients. In almost any case, a responsive website as a progressive web app is more likely to be the means of choice.

Advantages of Responsive Websites in Comparison to Native Apps

This may seem superficial, but of course, there are a few solid advantages responsive websites have over native apps. These are only actual advantages if you’ve come to the conclusion that a native app is not the right choice for the client.

Before we get to the advantages, we want to note that the standardization of web technologies has lead to the irrelevance of former disadvantages web apps had in comparison to native apps, including the access to device functions, above all else. Read our articles on PWA here and here, and convince yourself.

Now, let’s get to the advantages a web app has over native mobile apps:

The Costs Are Much Lower

The costs of a responsive website are much lower than the costs of an app. At least, this is the case if you have certain aesthetic aspirations regarding the app, and aren’t satisfied with the next best building kit system.

I have created an app version for an existing website’s sensible functions, and it took about three times the development time for far less functionality. This was hard to explain to the client.

You Don’t Need to Abide By App Store Rules

Native apps have to be handed in to be checked, and sometimes, they only arrive in the app store after a few days, from where they can make their way onto the consumer’s device. Each update has to undergo this process again. It is necessary to create and maintain app store developer accounts. A responsive website can simply be put online.

The last sentence says it all. We can just put responsive websites online, and they become accessible right away. They don’t need to be installed. Nonetheless, it is possible to prepare our responsive website for pseudo-installation. The user can create an icon on the home screen which allows him to access the website at any time. With PWA, we have even more extensive options.

A responsive website can be designed with all the SEO tricks at our disposal, making it end up high in the search results. With an app, the only way to do so is to set up a website promoting the download, following the same SEO rules. Who’d think of this as a sensible step? Especially since this visibility wouldn’t even include the content of the app. Another point for the responsive website.