Breaking News: Noupe Has Been Acquired by JotForm 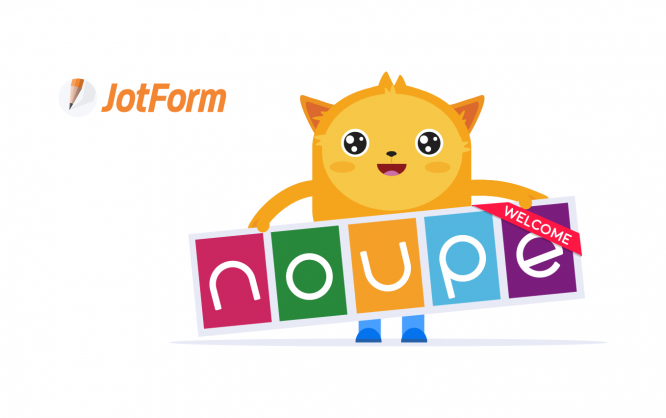 Ever since we started Noupe in 2009, we’ve been on a mission to be an authority on all things design. Whether it was providing tips on CSS, JavaScript, UI/UX, vector editing, typography, or WordPress — we’ve been here to provide helpful advice and reviews. We’re proud of what we’ve accomplished and all the designers we’ve helped.

But today marks the next evolution of Noupe. We’re excited to announce that Noupe has been fully acquired by JotForm!

You probably know JotForm, the easy-to-use online form building software with loads of features and a sleek UI. In fact, you may have heard about them from us. We told you about them when they released JotForm Cards, the JotForm Form Designer, and JotForm 4.0. We told you about the six reasons you should use JotForm for your web forms, and even invited you to enter JotForm’s web form design awards.

Now, JotForm and Noupe are one.

Why is  JotForm acquiring  Noupe?

The reasoning was simple. As a company, JotForm loves design. Its users include designers and design aficionados, and JotForm’s team is full of talented developers and designers who regularly read Noupe. But what really drove this acquisition is that JotForm loves writing about design.

The JotForm Blog is also a resource for thousands of designers and developers looking for tips and trade secrets, just like Noupe. Now that Noupe is part of the JotForm family, it’ll get exposure to even more readers than ever before. JotForm has nearly 4 million users worldwide. It’s a brand that has helped countless companies create better designs — something that made them a perfect fit to carry the Noupe torch.

As a devoted Noupe reader, you won’t miss a thing. JotForm’s team of writers will continue to write thoughtful, researched articles on creating great design. The major difference is that you’ll have exposure to even more articles and resources.

For a sampling of what JotForm writes about, check out popular recent articles, Why we decided to drop LESS for SCSS, and How to “Remote User Test”.

The former Noupe team will now focus on other projects, such as the German design magazine Dr. Web, which has been the initial spark setting fire to Smashing Magazine and Noupe, both of which wouldn’t even exist without the good ole Doctor. Wave Goodbye, say Hello!

JotForm was founded in 2006 as the first WYSIWYG online form building tool. Since then, it’s grown to be the leading online form creation software, with millions of users around the world and over 100 employees. You can find JotForm all over the web, powering application forms, registration forms, website contact forms, order forms, feedback forms, and more. If you aren’t a JotForm user yourself, chances are you’ve filled out someone else’s JotForm-powered form and never even realized it.

In addition to JotForm Blog, you can learn more about JotForm by reading advice and stories from their CEO, Aytekin Tank, through his articles in Entrepreneur and Medium.