A Life Without Adobe: Possible, but Pointless (IMHO)

111
SHARES
ShareTweetLinkedin
Adobe celebrates the 25th birthday of Photoshop. The first version of the image editing program came into market in 1990 and marked the beginning of the worldwide success of the Californian company. Photoshop is in all likelihood still the most famous product of Adobe; being popular and in use by a broader clientele than just the design industry. 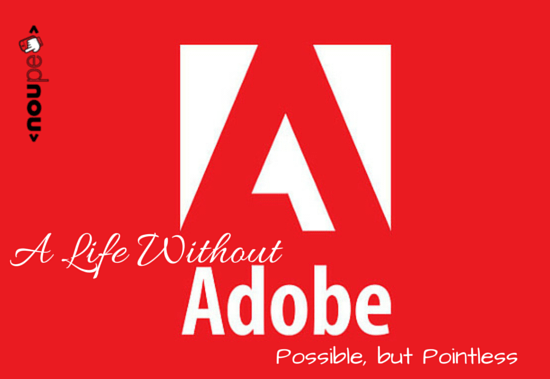 Throughout the last 25 years, Adobe has expanded its portfolio continuously, cementing its monopoly. About ten years after Photoshop, InDesign as a desktop publishing program entered the market and established itself alongside the then dominant QuarkXPress. The PDF format has by now become the standard format for the exchange of documents and is indispensable as the basis for the print industry as well.

Alternatives Despite the Monopoly

One way to keep control of the graphic design and web design market is to buy up competitors. Macromedia was purchased for that very reason in 2005. The then common Flash was absorbed, the popular graphic design and drawing program FreeHand discontinued. As a graphic and web designer, you are by know surrounded by products coming from St. Rosé, California. Is it still possible to live without Adobe? In fact, it is not as if there were no alternatives to Adobe. There are numerous commercial and even cost-free programs for image editing that have at least a distantly similar amount of features as Photoshop. Especially GIMP comes to mind. A new kid is in town named Affinity Photo. There are good layout and setting programs, Scribus, for example, as well as a myriad of ways to create PDF files. As for Flash - nobody cares for that anymore anyway. Adobe-CEO Shantanu Narayen at the Adobe MAX in 2013 Nonetheless, Adobe remains the uncontested market leader in creative software. If a life without Adobe is possible, the question remains whether it's worth it.

It is certainly possible for me as graphic and web designer to find cheaper or even free applications that cover image editing, compositing, and layout. But it becomes difficult as soon as I work with external data or other freelancers. And that often happens. Vector graphics are as a matter of fact exchanged as Illustrator files and layout files are created as InDesign files. It is thus more than futile to try to manage without Adobe. Moreover, as a graphic designer one tends to be susceptible to smart design. There is a reason why most designers have Apple products on their desks. The same goes for Adobe software. It looks good and more often than not, you can have a lot of fun with it.

Subscription Model And Expansion of the Product Range

As soon as Adobe introduced Creative Cloud and thus the era of the subscription model, feelings were running high. Economically, the change seems to have been profitable for Adobe. And as I now have access to almost all applications they offer, there is no need to look for any open source solution any longer just because I have to work on video or audio once in a while. In that case, Premiere Pro or Audition get installed as a matter of course. And due to products like TypeKit, the Marketplace and the personal cloud storage I get more and more involved into the Adobe world. This will continue with the purchase of Fotolia. As someone who likes to create and design, I also belong to those who wait for new features and options and like to snuggle themselves into Adobe's neat monopoly world. What's your take on the matter? Are you a fanboy or a hater? (dpe)
111
SHARES
ShareTweetLinkedin

Home » A Life Without Adobe: Possible, but Pointless (IMHO)