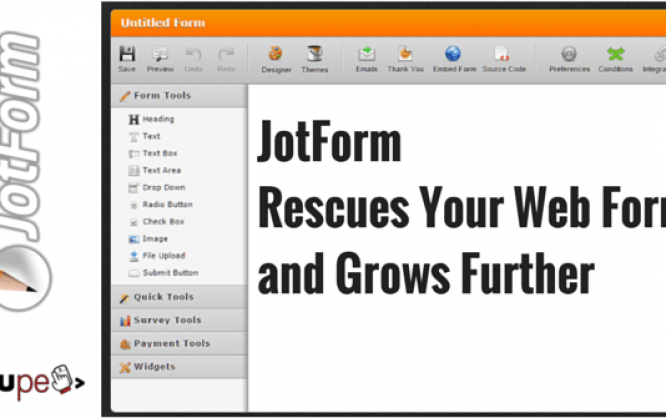 It comes without further explanation that we here at Noupe are big fans of JotForm. If you are one of our hundreds of thousands of frequent readers, you were unable to get around the praises we shared. The year 2015 is another good year in the history of the service as they continue to innovate. Furthermore, Adobe has added its part to the continuous growth of my favorite forms platform... 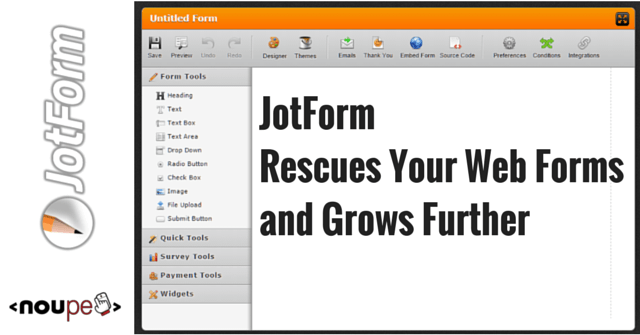 It is up until next Monday, the 22nd of June, that you can still use Adobe's FormCentral service to create forms and collect data. Starting following Tuesday, you will no longer be able to create new forms or collect new data but you will still be able to download existing data from existing forms. Then, on July 28th all your forms and form data will go down the drain. It's high time for action. Should you not know what FormsCentral is or better was chances are you need not do anything ;-) For those of you who are still curious, Adobe FormsCentral was, simply speaking, an online collector backend for PDF forms. Users would create fillable forms as PDFs and then send them around or place them online. FormsCentral was an option to bind these PDFs to. Once done the data entered was collected online which made it easy to handle. FormsCentral was created and maintained by the team that is also responsible for Adobe Acrobat and its ecosystem. 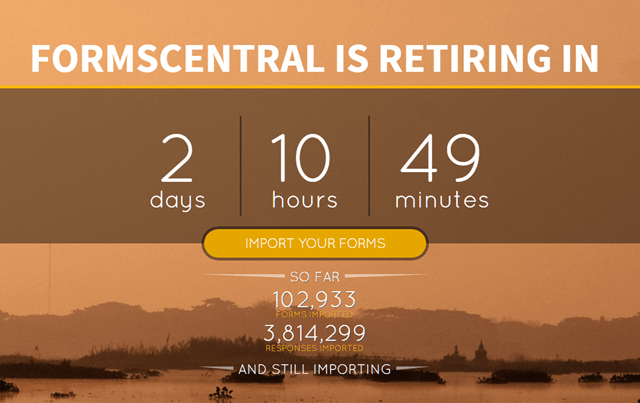 JotForm Welcomes Users of FormsCentral with a Countdown Over the years, FormsCentral did not gain enough traction to satisfy a large company and its high expectations. So they decided to dump the offering altogether and gave people six months to cope with the consequences. These six months are running out now. High time for those that have still not taken action. JotForm was one of the first forms providers to present an alternative and foremost a simple way to migrate. Driven by user requests from their own support forums JotForm established a task force to get a solution up quickly. Read this Medium post to learn about the process. Up until today, JotForm has imported more than 100,000 forms with almost 4,000,000 user responses stored. JotForm even did what they had not done before. They came up with a solution to create fillable PDFs for their own service where they before only offered web forms. Identifying a problem, then pushing out a solution, that's what I expect from an innovative company. If you haven't but need to, make sure to migrate your FormsCentral data to Jotform.

Web forms don't need to be boring. With JotForm's relatively new form designer even less so. We've covered that product here at Noupe already. Still a nicely designed web form might still not cut it. What if we could add almost any element to our web forms quickly? Think of image sliders, YouTube videos, SoundCloud files and more.

At JotForm, they have a dedicated team of six developers working exclusively on providing you with the best widget experience any web form can offer. Besides the few that I named there are almost 400 widgets available altogether spreading over 18 categories of use cases. Chances are, the widget you need already exists. Check that out.

Here are our other articles covering JotForm products. We have a review of their new form designer, and we took a look at their marketplace. I was honored to be part of the jury for the Web Form Design Awards in November 2014.
92
SHARES
ShareTweetLinkedin