WordPress 2017: More and More Sites Use the Popular CMS

WordPress is popular, but people like to claim it was dying at times. Several recent statistics show that the CMS is more alive than ever.

For three years now, the team of Nelio Software from Barcelona, Spain, has been investigating the dissemination of WordPress as an engine of the websites of the 5,000 fastest growing businesses of the year. The foundation is the list Inc 5000 from Inc.com. In 2015, WordPress already made up a share of over 42 percent amongst the top 100 of the Inc. 5000. In 2016, this value jumped to over 60 percent, while settling at a slightly lower level of 54 percent in 2017. The spread among the top 100 of the Inc. 5000 is especially interesting, as these businesses are heavyweights where the website costs are only a subordinate factor.

Of Course, WordPress is Especially Interesting for "the Poor" 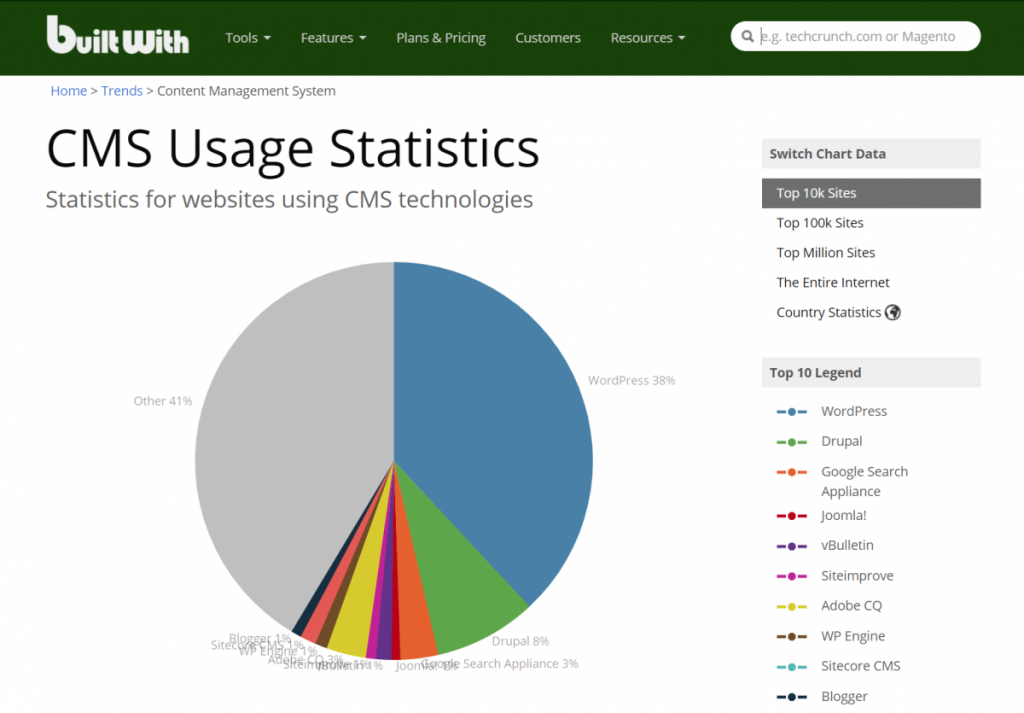 Built With: Recent Statistics. (Screenshot: Noupe)[/caption] It's pretty clear that with lowering significance and increasing cost relevance, the tendency for using WordPress rises. For small and medium-sized websites, WordPress is pretty much the logical choice. Ten thousands of plugins and themes leave almost no need uncovered. There's barely anything that can't be done with WordPress (almost always for free).

The REST API Will be the Next Growth Engine for WordPress

For the future, we should expect WordPress to establish its position at the top even more. With the REST API and the keyword Headless CMS, applications that could not be created with the system before, become possible. The REST API allows you to basically use WordPress as a data backend, while the frontend application can be created completely independently, and does not need to be related to WordPress outside of the API access. This also explains the term headless. WordPress is robbed of its visible part and only runs as the engine under a completely different hood. For the small, and medium web presences, this won't really matter. Here, I expect bigger changes from the new Gutenberg editor, which will become available in April of 2018, with WordPress 5.

Don't Trust a Statistic That You Haven't...

Last but not least, let me say something regarding the numbers. According to Built With, there is a WordPress share of 38 percent among the top 10,000 of 2017, with a rising tendency the wider the top list gets. The crawlers of W3Techs detect a WordPress market share of 59.9 percent in the top 10 million. Behind that number, there are only 29 percent of websites from the top list, as the market share only refers to the sites that run on a CMS. According to W3Techs, however, the majority of web presences, at 51.4 percent, don't have any underlying CMS. As always, we should be careful when dealing with numbers. However, it's a fact that we can twist and turn it however we want to. We can't deny the rising market power of WordPress. The fact that Automattic evolves more and more in the direction of a SaaS provider does not have to comfort us...
32
SHARES
ShareTweetLinkedin

Home » WordPress 2017: More and More Sites Use the Popular CMS