Body Art of the Centuries: Greatest Examples of Traditional Tattoos 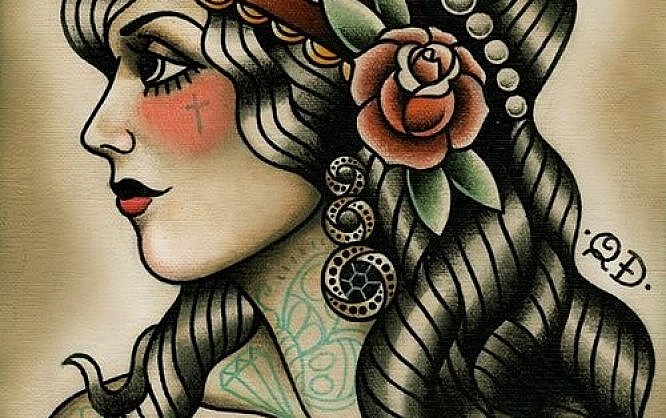 Getting inked has become a lot more popular recently, but tattoos are not something recent. In fact, tattoos are deeply embedded in human history and play an important role in many cultures and traditions.

The oldest evidence that tattooing existed comes from the Upper Paleolithic period in Europe, where there are tools that signal people got inked 40,000 years ago. The earliest solid proof is found on Otzi the Iceman, who lived somewhere between 3300-3100 BC.

So in this article, we’ll be going over Japanese tattoos, Nordic tattoos, Polynesian tattoos, and traditional American tattoos.  So, without too much delay, let’s get right into it.

During WW2 when millions of men came together in Hawaii, they had the chance to mingle with people from all walks of life and due to the war, their perspective on life changed drastically.

Sailor Jerry, who had a tattoo shop in Honolulu was one of the biggest actors in introducing traditional American tattoos to the masses and making it what it is today.

Did you know that tattooing is illegal in Japan? Inking has been outlawed for the last 200 years but still, people carry the vibrant and iconic Japanese style tattoos all over their bodies proudly. Tattooing in Japan has been carried mostly by underground artists, or a rare few who had a medical license to do so. Traditional Japanese tattoos include cultural symbols, a vibrant color palette, and are usually large tattoos that can cover an entire limb or even the whole body. Most iconic designs usually include the Koi fish, dragons, tigers, oni (Japanese devils), and Lotus themed designs.

Polynesia refers to the islands and tribes that are a part of Oceania. The Polynesian triangle is the home of many island tribes such as the Samoans, Hawaiians, the Maori, Tahitians, Cook Islanders, Marquesans, and Tongans. While there are slight cultural variations between tribes such as some variances in languages, inking remains a central and irreplaceable aspect of all Polynesian cultures. In fact, it was so important that tribe members who shied away from getting inked were shunned from the community and people who had incomplete tattoos would carry them as a reminder of their weakness for the rest of their lives. Traditional Polynesian tattoos are a bit different than the rest of the tattoo traditions on this article and don't fall under tribal tattoos as their symbolism comes from patterns and the body parts they are inked on. A tattoo that is on the chest or arm means something entirely different than a tattoo on the lower body even if the designs might seem similar.

While there are conflicting historical reports on wether Vikings were inked or not, Nordic styled tattoos are great both because of the patterns used and the symbolism behind them. The intricate nordic themed patterns woven together with mythological signs make up for great tattoos that both are good looking and hold meanings behind them.

All in all, we love tattoos, tattoos are cool. Carrying a great artists' art on your body is a great honor. While tattoos are getting increasingly popular in the last few decades, they have their roots in the history of our kind and that makes them even cooler! If you think we did any injustice to any tattoo style or if you believe another type of traditional tattoo styles should be featured in this article, leave us a comment. If you know any great tattoos that would fit this article or if you have one yourself, reach out! We'll love to feature them in our article.