1
SHARES
ShareTweetLinkedin
Today we have a new designer spotlight, where we interview and feature a member of the design and development community. In this installment, we shine that light on talented motion graphic designer and sports branding specialist Fraser Davidson. If you are not familiar with his work, then you are in for quite a treat (and just might find that you have seen some of his designs around the web before. In his own words, Fraser is:

"An award winning London based, freelance Motion Graphic Designer, Animator and Director. He was previously Head of Motion Graphics at Mainframe, a Motion Graphics, VFX & Animation House. Graduating from Nottingham Trent University with a BA in Graphic Design, Fraser has six years experience creating advertising, music videos and channel branding across many media. Fraser has had his work featured in a number of publications and has collected three International Promax Awards. He is the writer and director of the multi-award winning Youtube series 'The Alternative Rugby Commentary' and has collaborated on projects with Australian comedian, Tim Minchin. These include animated short, 'Popesong' and the BAFTA nominated animation for his nine minute beat poem 'Storm'. Directed by DC Turner and Produced by Tracy King".

Fraser is like a force to be reckoned with. His work absolutely screams creative overflow! With his intense and near flawless design work in the sports field, to his deft, imaginative animation and motion graphics designs that are executed with such precision and skill, Davidson's portfolio is simply stunning to behold. Below, interspersed throughout the interview are some of Fraser's skillfully crafted pieces.

Thanks again for agreeing and taking the time to answer these questions. So Fraser, what got you first interested in the motion graphics game? Well, I studied graphic design at University. I found after two years on the course that I didn't really enjoy the emphasis on what I considered to be the mundane aspects of design. I wasn't that into the nuances of type layout, grids and high concept stuff. I happened to stumble upon the After Effects section of the course (web design was full) and got sucked in from there. I self taught and spent the rest of the course bending projects to my purposes. I got a job with Mainframe in London shortly after leaving university and was lucky enough to work with some of the best in the business. Mainframe has since spawned several great companies including key components of Man vs Machine, The Found Collective, Beautiful TV and several more.

WRU In Stadium Animation from Fraser Davidson on Vimeo.

This is a project for the Welsh Rugby Union. Fraser was the Live Action Director/ Animator/ Compositor Branding is a delicate, very involved process, how did you first become interested in this area of design? I'm not convinced it is that delicate an art to be honest, and I certainly don't feel that way about my own work. I enjoy branding as it gives you a chance to be quite gestural with your marks. You only really need one good idea. This helps as I tend to avoid good ideas on the whole. Your work in branding focuses on the sports field. Is this a niche you came to focus on as you saw a need there, or were you drawn there as a fan? Or was it a bit of both? Well, I had a fairly brief career in rugby before starting in design. I've always been drawn to the contact sports, and since a young age was interested in the symbolism and the visual derivation of logos and team colours. Theres a real tribal nature that comes with sport branding, there are very few other industries in which consumers/ fans feel such a connection with a brand or logo. The idea that you can create something that people wear as a genuine piece of heraldry, as part of a clan or tribe really appeals to me. Team logos are things Ive drawn virtually my whole life, its just that I have only recently started doing it for a job. 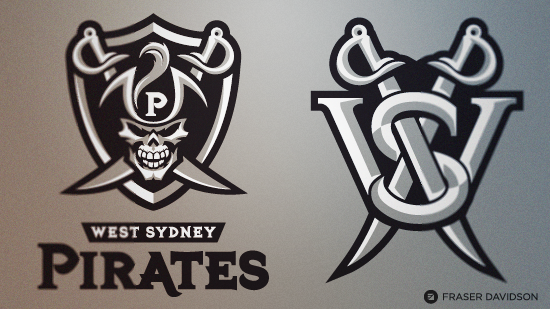 With your work in sports identity, what is your process like? How do you typically get started? Hmm. Its a good question, but not an easy one to answer verbally. I typically have a rough idea for a feeling or stance of a given animal/vegetable/mineral and kind of work into the detail from there. Its important that logos have movement and the feeling that you have captured a particular attitude or emotion. Once you have that sense of purpose locked down, the rest of it is just tweaking really. You have worked with some really high profile clients and organizations, is there still some dream client (or team) that you would love to have the opportunity to work for? Yes, in the last year Ive had the opportunity to work with some great clients and organisations on some really exciting projects. Most of these I cant really share at the moment as they wont be in public domain until next season. But there are hopefully going to be some interesting new looks for a few very big NCAA schools. I guess if I were to be greedy, I'd say that an absolute dream job would be to produce a logo for an NFL franchise. 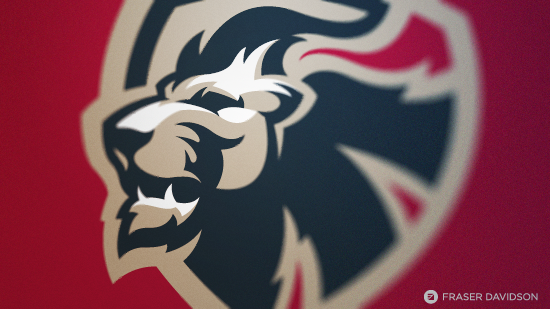 With your work in motion graphics, how would you describe your process there? When getting started what do you do differently than with your branding work? The two have very little in common to be honest. A typical logo takes 2-3 hours to put together on average, animation projects can last for months. Its much more technically involved. After the initial creative ideas and bursts, a large part of the job relies very heavily on hours of thankless graft. There is a somewhat pervasive idea that computers make animation a) easy and b) fast. Its still neither, if you do it properly. On the motion graphics front, you also do art direction and animation. Do you prefer to handle all of these various aspects of a project, or do you have a favorite you'd rather focus on? On the whole, Its far easier to express your own ideas than it is to express someone else's. I've worked on jobs where 'creative' people see you as an extension of their own tool kit and not as a creative person in your own right. It can be quite hard to have someone with no design experience sit next to you and have you shift keyframe velocities about. On the whole I like producing every part of an animation. Except voice overs, there's a total budgetary minefield.

This is the preview for the animated short Tim Minchin's The Storm. Fraser was the animator on for this project. What are some of your go to tools to work with? What software would you essentially be lost without? As a mograph designer you will need an extensive working knowledge of Illustrator, Photoshop and After Effects. A 3D program helps a great deal also. What advice would you give to other motion graphic designers just getting started in the field? The best design advice I ever received is that you are known for what you do. Seems obvious enough, but the number of people I come across whose jobs involve 3D compositing, who would far rather be creating character animation (or vice versa) is crazy. The principle point has a that people will not employ you to create work in areas you do not have form in. If you want to design sports logos, start today, get them out there where folk can see them. If you want to get into character animation, start animating shorts in your spare time. Be prolific, don't be guarded of your design and don't hide it away. This applies to anyone, not just beginners.

This is a promotional video for a Zappar Branding Project. Here, Fraser was the Animator and Director What tips would you offer someone who decides to toss their hat into the branding arena? Practice I guess? Again, I dont mean to seem facetious, but my answer is really the same as above. Do as much of it as you can and get as much feedback as you can. Very few people get worse at something the more they do it. What would you say are some of the major developments that have helped shape the motion graphics field since you have been in it? What things would you say are on the horizon for the field? Its really almost been the perfect industry from my perspective. The internet/ youtube/ the viral and all the other content avenues have meant an explosion in the need for video content. When I first started (only 7 years ago) we were still working predominantly in TV branding, there weren't web budgets like there are now. The certainties of traditional media have disappeared and a guy in his bedroom with a good desktop computer can make anything from film quality vfx to animated cartoon series with millions of viewers. With all the new technology and means to view video, its hard to see where we'll be in 2 years time. Obviously the resurgence of 3D in films and TV is yet to reach an apex, but I think augmented reality is going to be the next big unexplored vista. 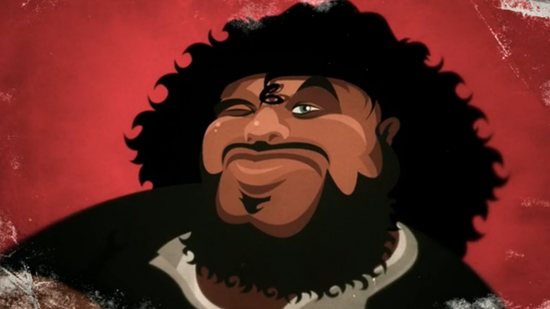 This is a still from a series of videos for The Alternative Rugby Commentary. Fraser was the Animator/Director/Writer for the majority of the promos in this project. Speaking of the future, do you have any projects in the works that you can share with our readers? Motion wise, I have a quite original induction video for a large ad agency that's getting its final renders while I write this. I recently worked with my friends at The Found Collective on a nice piece for the UK Government promoting Britain. Rumour has it that it was to be viewed by the big man from the White House. And I have a nice personal piece that's overrun by about a year for the awesome British comedic poet Tim Key. They will hopefully all feature on my website in the next few months. Unfortunately I cant really tell you too much about the College rebranding. Your work reflects the passion of someone who is always having fun. Is this the case, or are you just really good at making look that way? Ha. I tend to work in frenetic bursts of good humour I think. I'm quite easily distracted, so I often work on a number of projects at once. Hopefully this keeps them looking fresh and fun. 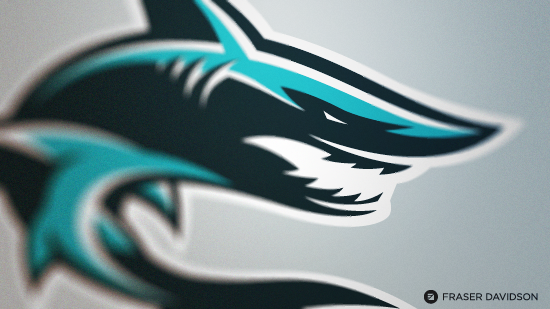 How would you say designing a logo for a sports team or franchise differs from designing a logo for a regular business? In other words, are sports fans more demanding than your average customer in terms of accepting the design? People don't send you hate mail if they don't like the financial services logo you designed. Companies 'belong' to the people who own them and if its a good company, the people that work there. Teams and their logos 'belong' to fans. People might wear Nike/ Diesel/ D&G logos because they like the product or associate with the brand. People wear team jerseys for far stronger emotional reasons. They pour far more time and energy into these organisations, the teams are part of who they are. A good team logo should reflect this. 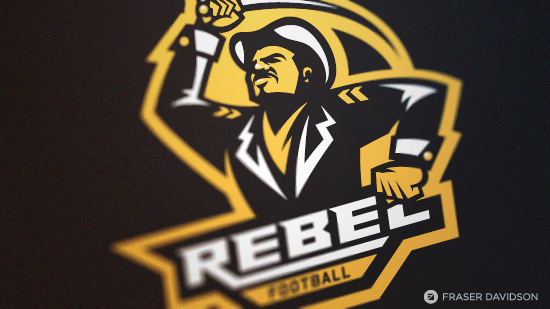